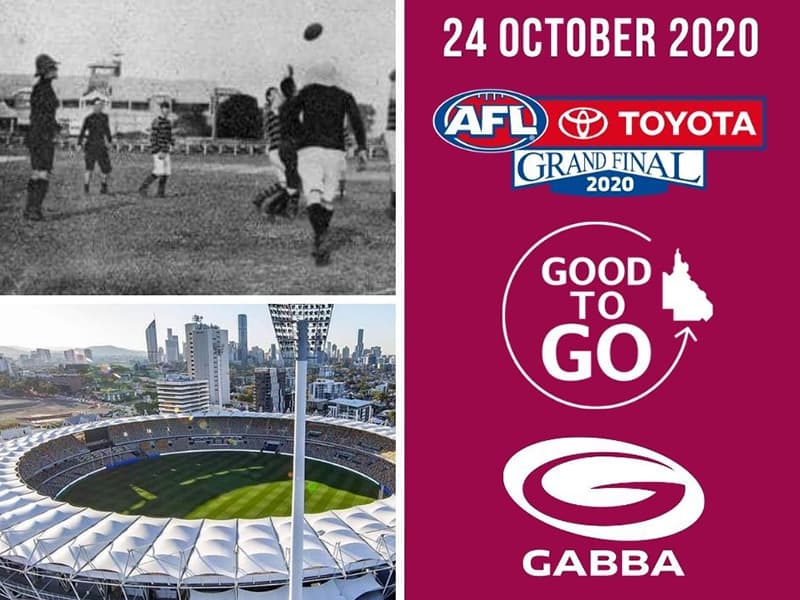 The Australian Football League (AFL) will host its Grand Final outside the State of Victoria for the first time this year. Brisbane’s Gabba Stadium has been picked up to reward Queensland’s assistance to the League during COVID-19 which has taken the world by storm. It’s the first time a Grand Final will be held outside Victoria in 123 years.

The Brisbane Cricket Ground, commonly known as The Gabba, is a major sports stadium in Brisbane, the capital of Queensland, Australia. The nickname Gabba derives from the suburb of Woolloongabba, in which it is located.

The 2020 Grand Final was scheduled to be held on October 24th at the Melbourne Cricket Ground (MCG), its traditional home, but with the coronavirus scenario getting quite grim in the State of Victoria, a venue change has been necessitated.

In July, a deal was struck for Queensland to become the temporary home of the AFL with the State targeting hosting rights to the Grand Final in return as a quid pro quo arrangement, as the Aussie rules competition exited its heartland of Victoria amid the escalating COVID-19 situation.

The AFL resumed its 2020 season on June 11, 81 days after it was suspended due to the fatal respiratory disease, but had to deal with how its Victorian teams play their games, with concerns about the situation in New South Wales as well.

The 2020 Grand Final will retain its original date, with the Gabba to host a night game with the start time to be confirmed in the coming weeks. Under the arrangement, and pending health authority green light, the AFL said the Grand Final will be played before a crowd of approximately 30,000 at the 42,000-capacity venue.

The Grand Final has never been played outside of Victoria and, as part of the historic decision, the AFL said Queensland will host a “festival of football”, which will include a Premiership Cup tour across the State.

Stated AFL Chief Executive Gillon McLachlan, “This is an exciting opportunity for our code and we look forward to now working with the Queensland Government to successfully stage the 2020 Toyota AFL Grand Final – the biggest event on the AFL calendar – and share it with the community right across Queensland.”

“The Queensland presentation was world-class and, while the 2020 Toyota AFL Grand Final will be the centrepiece, an extensive promotional campaign for the sport of Australian football, including multiple regional locations throughout Queensland, will bring fans closer to footy in the lead-up to the event and provide a lasting legacy,” McLachlan added.

“It is the first time our grand final has been played outside of Victoria and we thank the Queensland Government and Premier Annastacia Palaszczuk for the opportunity of moving the game to the Gabba and for their support in taking the game to as many people across the State as possible,” McLachlan continued.

Queensland got the whole Grand Final pie defeating rival offers from New South Wales, South Australia and Western Australia. As part of the arrangement to relinquish the match in 2020, the AFL has agreed to extend the current contract with the Victorian Government and the MCG for an additional year to 2058, including the right to host the Grand Final.

Taking into cognizance the evolving COVID-19 situation in whole of Australia, the AFL has also announced a contingency plan if the health and safety of the Queensland community is compromised and affects the ability to host a crowd at the Grand Final. Should such a scenario arise, the Adelaide Oval in South Australia would be the back-up venue.

Commenting on the award of the hosting rights, Queensland’s Tourism Minister, Kate Jones, stated, “Very few industries have been as hard hit by COVID-19 as our tourism and events businesses, so to be able to host the AFL Grand Final in Queensland for the first time ever is a huge confidence boost. This is so much more than a game of footy, this is a chance to show Australia exactly what Queensland offers when it comes to being not only an events destination, but a tourist destination.”

“While the successful staging of the Grand Final and the Brownlow Medal will be our focus, we will also use this opportunity to highlight Queensland’s tourism offering to encourage those who can travel to visit, and to help those who currently can’t come to start dreaming about their next holiday when restrictions ease,” Jones added.

Premier of Queensland Annastacia Palaszczuk welcomed the AFL’s decision saying Queensland is “honored – and ready. I want to thank the AFL, and especially the game’s fans in Victoria, for trusting Queensland with their most important event.”

“This will be an once-in-a-lifetime opportunity, so we are determined to give everyone a Grand Final they’ll never forget,” she added.

The Premier said the decision is recognition of the hard work Queenslanders have done to slow the spread of the deadly coronavirus – “It’s economic boost for our State but this year’s season has also offered an opportunity to grow new fans for the game. Rather than marking the end of a very difficult year, I hope it marks the beginning of a whole new era.”

All participants are abiding by a strict COVID-safe plan including quarantine endorsed by Queensland’s Chief Health Officer.

« Previous News: Will UEFA keep its date in Budapest?
» Next News: Dena-KDDI’s ‘virtual stadium’ for fans