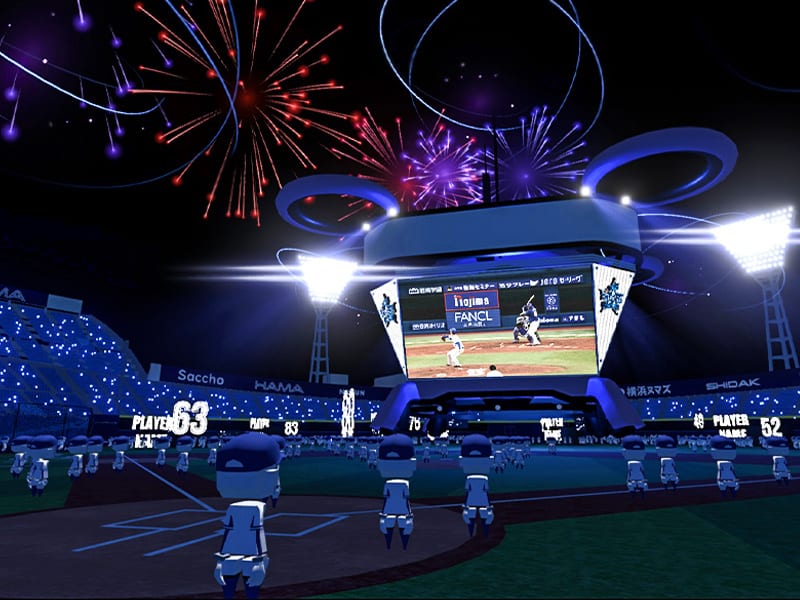 No jet balloons will be launched during the seventh-inning stretch or Yasuaki Jump at Yokohama Stadium in Japan amid the coronavirus pandemic which is still bleeding the world. Unless, of course, it is held in cyberspace.

Yokohama Stadium is a stadium in Naka-ku, Yokohama, Japan. It opened in 1978 and has a sitting capacity of 34,046. It is primarily used for baseball and is the home field of the Yokohama DeNA BayStars, the professional baseball team in the Japanese Central League.

The Hanshin Tigers are a Nippon Professional Baseball (NPB) team playing in the Central League. The team is based in Nishinomiya, Hyōgo Prefecture, Japan. It is one of the oldest professional clubs in Japan.

The entire arrangement enables fans to have a virtual experience at Yokohama Stadium, affectionately called Hamasuta by baseball fans, by using avatars to walk the stadium’s concourses.

These “visitors” can watch games on the field — a place they’re rarely allowed to go — on big screens suspended in the air above the diamond. To put it in simple words, it’s a virtual public viewing.

Baseball fans have been asked to desist from some of their traditional forms of cheering, such as singing and yelling, to help arrest the spread of coronavirus. BayStars fans, for example, can’t jump up and down and yell as they normally do when star reliever Yasuaki Yamasaki emerges from the bullpen (an exercise area for baseball pitchers).

However, in the virtual world, nothing is off limits.

The BayStars and KDDI had been working in tandem even before the coronavirus pandemic struck, having joined forces to introduce things such as cashless payments, via AU Pay, at shops encircling the venue.

While their earlier collaborations were done with the objective of making the arena experience more convenient for fans, they were forced to change course in response to the pandemic and the fact so many fans are unable to attend games in person.

Hiroyuki Hayashi, Director of the BayStars Branding Division, noted during an online news conference recently, “We are currently in a situation where we can’t create so much excitement at the stadium. But we wanted to come up with plans, and not just accept the situation.”

The 2020 NPB season kicked off behind closed doors on June 19 and has allowed a maximum of 5,000 spectators to attend games since July 10. The BayStars have been one of the most full-of-verve teams in the league in terms of using Internet tools, such as Zoom, to remain connected with their fan base.

By teaming up with KDDI, the club hopes to provide fans with a more interactive experience.

With 5G high-speed wireless technology having officially started operations this year, the experience could be enhanced even more in the future.

Kohei Shigeta, Director of 5G and XR Services at KDDI, said the Virtual Hamasuta project does not require 5G, but that the technology would boost online services for the fans going forward.

Shigeta added, “This is perhaps the first case in Japan, and maybe first in the world. We’re hoping to give the fans new experiences that they can only have through the virtual space.”

Shigeta continued that KDDI does not intend to limit the virtual stadium technology to only the BayStars and hopes to inspire other teams and other sports to emulate similar ideas, considering the fact that it will be a long time before COVID-19 dies out and disappears from the world.

He commented, “We would like to help sport as a telecommunication company by adopting different technologies. As the areas of 5G expand, it should be easier to do that. We would like to expand 5G technology while partnering with a flagship club like the BayStars. We think it’s nobody else but the BayStars that can do things like this drastically and quickly. So, if we keep working on such a thing like this, we think it will increase demand.”

The BayStars may, in the long run, monetize the program, for instance, by charging for entry to the virtual stadium. But Hayashi did not spell out if, or when, that might happen.