Green Army ‘charged’ up to play at New Lawn 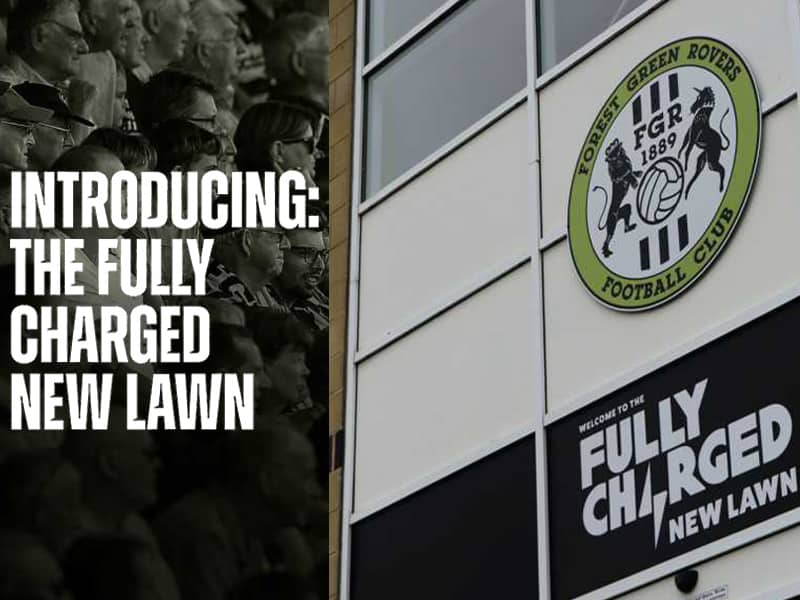 The ‘Forest Green Rovers’ stated that it had announced in June this year that it was looking to award the naming rights for its stadium to an organization working on environmental issues, after its former naming partner ‘Innocent’ moved to support the club’s community initiatives.

The Forest Green Rovers Football Club is a professional football club based in Nailsworth, Gloucestershire, England (UK). The team competes in English Football League (EFL) League Two and have played their home games at the New Lawn since 2006, when they moved from their original home at The Lawn Ground.

The 5,147-capacity New Lawn, also known as The Fully Charged New Lawn for sponsorship reasons, is a football stadium in Nailsworth, Gloucestershire. It has been the home stadium of League Two club Forest Green Rovers since 2006. During the 2007-2008 seasons, the stadium was shared with Gloucester City.

Fully Charged is a YouTube channel and website focusing on electric vehicles and renewable energy founded by writer, broadcaster and actor Robert Llewellyn.

The ‘Forest Green Rovers’ further stated that more than 100 groups put themselves forward – with the club choosing Fully Charged – thanks to its work educating, encouraging and explaining the world of electric vehicles and clean energy technology to a rapidly growing global audience.

Fully Charged was founded in 2010 by Robert Llewellyn (Red Dwarf, Scrapheap Challenge) and now has over 800k YouTube subscribers, with its content generating millions of views every year. It has grown to encompass a live event series that runs on both sides of the Atlantic, with its latest event, Fully Charged Outside, taking place in Farnborough (town in England) from September 3rd to September 5th.

Through its partnership, Forest Green Rovers will be promoting Fully Charged to its global audience of football fans, while the club will appear throughout the season in Fully Charged content.

For the 2020-2021 football seasons – Forest Green Rovers generated around 5bn media impressions across broadcast, online and print media coverage worldwide – and with the club now playing at The Fully Charged New Lawn, a whole new audience will hear about the channel.

Together we can spread the word about electric vehicles, clean energy and green football. The Fully Charged New Lawn has a great ring to it as well.”

Added Robert Llewellyn, Founder & Presenter, Fully Charged, “It’s a real privilege, for what began as a humble YouTube channel, to be associated with a pioneering organization like the Forest Green Rovers. We love spreading the word about clean energy and electric vehicles and this will really help us get to a larger audience around the world. The way that Forest Green Rovers is revolutionizing sport is so important, in that it encourages people and businesses to be more sustainable.”