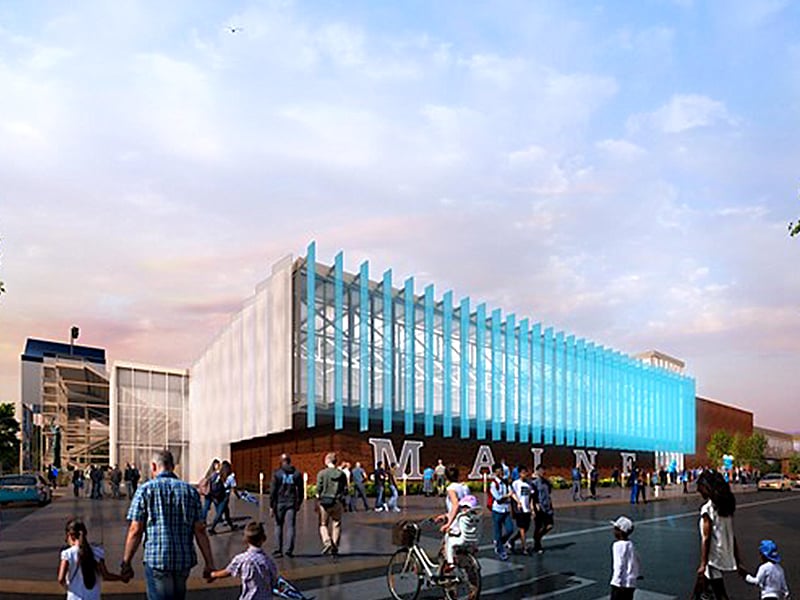 A $110 million athletic facilities masterplan has been unbolted by the University of Maine (US) to bring about a sea change in its sports facilities. The initiative is a kind of ode to Harold Alfond’s legacy of support for Maine education and athletics by providing futuristic facilities for all 17 varsity programs at Maine’s only Division I athletic program, and improving the overall UMaine student experience.

UMaine Athletics expects to get rolling on the plan, with small upgrades in summer 2021 before beginning construction on the new fields in summer 2022.

Harold Alfond was an American businessman who founded the Dexter Shoe Company and established the first factory outlet store. He passed away in 2007.

The Harold Alfond Foundation honors and promotes the values of its founder through transformative investments for the benefit of Maine (US) in education, healthcare, and youth and community development.

In October 2020, the Harold Alfond Foundation announced an historic $500 million investment in Maine and its people. The University of Maine System is to receive $240 million over 10-12 years, including $90 million in support for UMaine’s $110 million Athletics Facilities Master Plan.

maine.edu sources quoted Greg Powell, Chair, Harold Alfond Foundation, as commenting, “Harold Alfond believed in the University of Maine, its students and the impact of athletics. He would be very supportive of the direction and current leadership at the university. We are proud to continue his legacy of giving to projects that benefit Maine’s universities and its people.”

“We are going to build outstanding athletic facilities to support our Black Bear athletes and students and youth from all over the State,” remarked UMaine President Joan Ferrini-Mundy.

Added Ferrini-Mundy, “Wins for our athletic program and all the work we do to advance the initiatives supported by the Harold Alfond Foundation will include inclusion and community-building. We are Maine’s public universities and everyone will be welcome to engage in our programs, use our facilities and contribute to our success.”

Details, renderings and videos paying rich tributes to Harold Alfond’s legacy and providing an overview of the $110 million plan are now available at goblackbears.com. The website also includes opportunities for Black Bear Nation to contribute to the campaign to raise the initial $20 million match by joining the Alfond Fund administered by the University of Maine Foundation.

Black Bear Nation is the official University of Maine Athletics app and is a must-have for fans headed to campus or following the Black Bears from afar. With interactive social media, and all the scores and stats surrounding the game, the UMaine Athletics app covers it all!

Stated Chancellor Dannel Malloy, University of Maine System, “We are incredibly grateful for the generosity of the Harold Alfond Foundation. We have a great team headed by President Ferrini-Mundy and Athletic Director Ken Ralph, and a plan that will make UMaine the premier destination for college sports, youth, community, educational events, and recreational athletics in Maine. Now we need Black Bear Nation to help raise the initial $20 million match needed to get the plan done and to do even more.”

maine.edu sources further stated that Athletic Director Ken Ralph and Professor Judith Rosenbaum-Andre, co-lead of the UMS TRANSFORMS athletics planning initiative, will be working in close collaboration with campus committees and convening Statewide discussions on employing athletic facilities at UMaine to support other UMS varsities, high school athletics, persons with disabilities, athletes of all ages, and communities that may employ these new facilities.

Observed Athletic Director Ken Ralph, “For many years our athletes have been performing in outdated and even crumbling, cramped facilities. Thanks to the generosity of the Alfond Foundation and support from university leadership, we will be able to provide the quality of facilities necessary for our Black Bears to compete on a national level.”

Added Ralph, “We are also using this opportunity to reaffirm our commitment to equity and to show our dedication to making Orono the go-to destination for sports in Maine for athletes of all ages. Our students, our fans and the local community have waited a long time for these improvements, and we are excited to get started.”

Projects promoting the idea of gender equity like the UMaine Soccer Stadium and a modern sport-specific facility for women’s soccer will be accorded top priority.

UMaine Athletics, who teamed up with JLG Architects to develop the 10-year facilities masterplan, designed the plan as a way to best enhance and enrich the student-athlete and fan experience at university events. The plan was carefully constructed to develop facilities to also support a variety of campus programing such as, but not limited to, large academic conventions, music and arts events, and Army Reserve Officers’ Training Corps (ROTC) activities. Furthermore, these facilities will add much-needed space for the University’s robust recreational sports programs including all club and intramural sports.

The vision of the athletics facilities masterplan stretches far beyond the campus community as these futuristic facilities will be customized to host a variation of youth and high school events. The UMaine Athletics footprint will be equipped to host high school championships, youth club sports and other regional events as UMaine strives to be the premier destination for youth activities in the State.