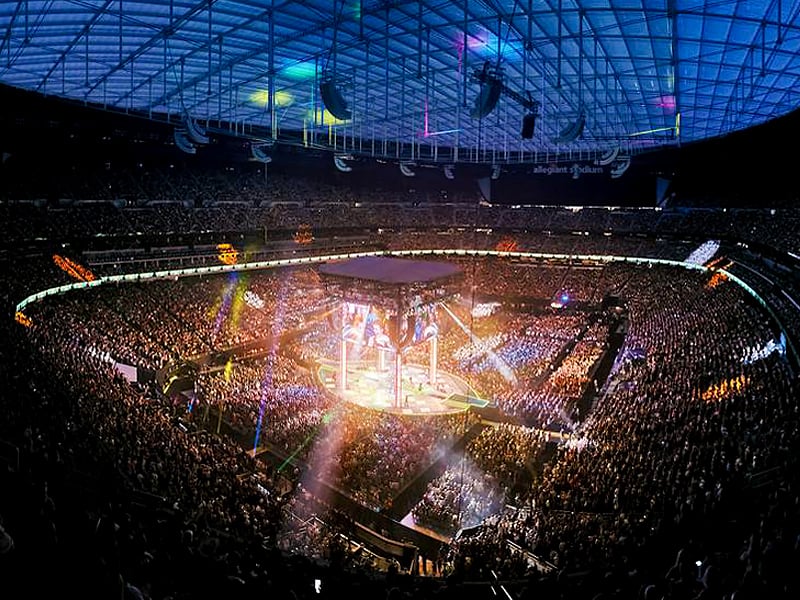 It was capacity crowd at Allegiant Stadium (US) on the night of July 10th when the America singer-songwriter Garth Brooks set the alluring arena’s stage on fire.

The ‘Las Vegas Weekly’ stated that just before Brooks took stage for a historic, sold-out concert in Las Vegas, he talked about the last time his band and crew played a venue of that size, in Detroit (US) in February of 2020. He said he did not perform with full gusto at the Detroit show but at the same time he did not even imagine in his wild dreams that it would be his last stadium tour event for nearly 17 months as COVID-19 broke out in March 2019 globally and ‘devoured’ the United States. Consequently, the live events industry got shuttered and this was the case with most other sectors the world over.

Troyal Garth Brooks is an American singer and songwriter. His integration of rock and pop elements into the country genre has earned him popularity, particularly in the United States with success on the country music single and album charts, multiplatinum recordings and record-breaking live performances, while also crossing over into the mainstream pop arena.

Comparing the interaction between the band and the audience to a prize fight, Brooks told a presser held at Allegiant Stadium on July 9th, “My job is hopefully [that] I get you on your back and then I just beat the living sh** out of you all night long. What happened in Detroit was they got up and got on me, and I got behind and I’m still pissed about it. I want a rematch with Detroit. They were so good. The truth was I was behind because they came ready to play, and I like being surprised like that, but at the end of the day, I want to win.”

The ‘Las Vegas Weekly’ further stated that the first-time capacity crowd (estimated at circa 68,000) at the year-old fresh-as-the-morning’s dew Allegiant Stadium also came ready to play, but the interaction was less like a big boxing bout and more of a back-and-forth love fest. The overwhelming energy which Brooks and company emanated while opening with the 2018 track ‘All Day Long’ was only the beginning, the key in the ignition. Operating from a football-shaped stage on the field surrounded by thousands of dancing, fist-pumping, cowboy hat-waving fans in tightly packed floor seats, the band consistently revved the engine all night long, performing for more than two hours.

Music buffs went delirious and extended ovations came at the close of nearly every number, and for locals in attendance, the sights and sounds of Allegiant Stadium operating the way it was intended for the first time was cause for a deeper celebration. But Brooks did not let up, giving a signature emotional performance interrupted only by brief pauses to express his gratitude to fans for coming back again after the long interruption of the pandemic which is still bleeding certain parts of the globe.

Brook’s show almost came as elixir of life for the entertainment-starved people of Las Vegas who were ‘holed up’ at home for a year as coronavirus ripped the United States apart leading to more than half a million people losing their lives. With the vaccination rollout program, things are back to normal in the US and death figures have drastically come down.

He said from the stage, “I can tell every musician out there [to] get back to it, because it’s the greatest feeling in the world.” As a punishing heat wave continued to sear ‘Sin City’, he thanked Las Vegas in general for building a domed stadium. Most fans walked for 20 minutes or so from the Strip over the Hacienda Avenue Bridge to get to the venue, braving triple digits and a setting sun beating down hard. After two big concerts in two weekends at the stadium, that walk has already emerged as the preferred transportation mode to ‘Death Star’, but hopefully cooler Fall temperatures will make the trip for Raiders games much more pleasant.

Brooks rolled through his biggest country-pop hits like ‘The River’, ‘The Thunder Rolls’, ‘Shameless’, ‘Friends in Low Places,’ and ‘Standing Outside the Fire’, took plenty of time to celebrate and highlight his longtime band and crew members during the show, took even more time to interact with the fans closest to the stage, and capped it all off by bringing out his superstar spouse Trisha Yearwood to sing a few songs together including the Lady Gaga-Bradley Cooper smash ‘Shallow’. With Brooks going ‘gaga’ over his wife’s talent, one might soon find the couple doing a gig together at the Strip in the future.

Next up for Brooks’ rejuvenated Stadium Tour is at the 45,807-capacity Rice-Eccles Stadium in Salt Lake City, Utah (US) on July 17th, and for Allegiant Stadium, it’s the soldout Confederation of North, Central America and Caribbean Association Football (Concacaf) Gold Cup Final soccer event on August 1st.

The entertainment scene in Las Vegas is back with a bang as on July 10th itself, a major Ultimate Fighting Championship (UFC) event was also held at the 18,000-capacity T-Mobile Arena in Nevada and Canadian singer Justin Bieber popped into the brand-new Wynn restaurant and nightlife spot Delilah for an impromptu performance.