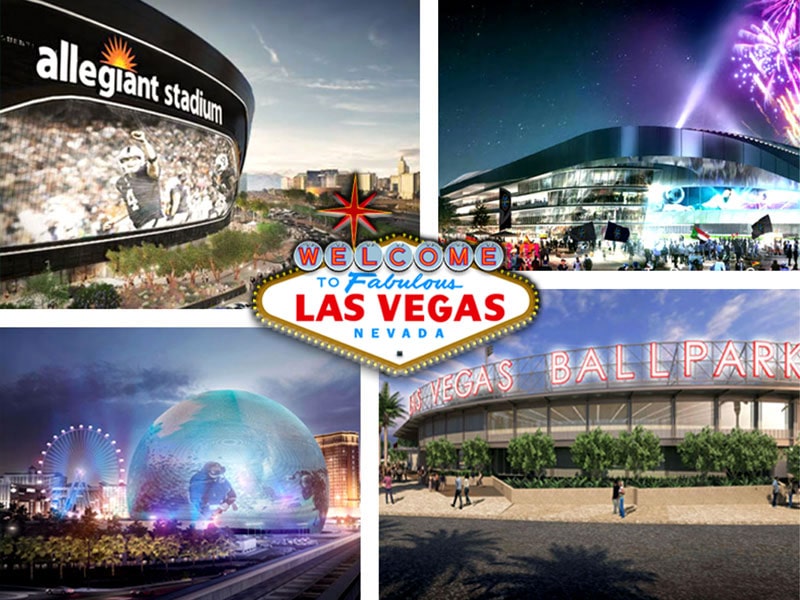 The T-Mobile Arena threw open its doors on April 6, 2016, and it is a multiuse arena on the Las Vegas Strip in Paradise, Nevada. A joint venture of MGM Resorts International and the Anschutz Entertainment Group, the T-Mobile Arena has primarily been used for entertainment events such as concerts and has been booked for mixed martial arts and professional boxing events, as well as other annual sporting events. It is also the home venue of NHL’s Vegas Golden Knights.

Mark Faber, Senior Vice-President, Global Partnerships, T-Mobile Arena, US, will give his views on premium seating at the Coliseum Summit US. Faber’s primary responsibilities include securing partners for T-Mobile Arena such as naming rights and founding partners as well as developing and selling the arena’s array of premium seating inventory. The head honcho will deliberate on how exclusive seating sections and VIP lounges in the $375 million T-Mobile Arena has raised the bar in the Las Vegas entertainment scene. The top official feels that premium seating facilities “adds a lot of value” to the arena.

Raul Gutierrez, Executive Director Arena Operations, T-Mobile Arena, US, is one of the speakers at the Coliseum Summit US. He will talk about venue security – securing the arena with the help of cutting-edge technology. He ensures that everything in the arena is up to standards when doors open and fans arrive. He is also responsible for arena security and seeks to reduce the risk of a terrorist attack – a problem looming large globally.

Don Logan, President/COO, Las Vegas Aviators, US will deliberate at the Coliseum Summit US on the challenges one has to face in the stadium construction process. Logan has been synonymous with professional baseball in Las Vegas for more than 25 years. His sound knowledge of the game of baseball and the Las Vegas sports scene is instrumental in the growth of Las Vegas Aviators. He has been inducted into the Southern Nevada Sports Hall of Fame. For years in the making, Logan worked really hard to give a final shape to the swanky Las Vegas Ballpark.

The collegiate athletic conference – Pac-12 Conference – will be moving its football championship game to Las Vegas when the Oakland Raiders’ new state-of-the-art stadium opens in 2020 in the entertainment capital of the world. The Conference has confirmed that it will play its 2020 and 2021 championship football games at the new Las Vegas facility.

Heather Vaughan, Vice-President (Marketing), Pac-12 Conference, is one of the speakers at the Coliseum Summit US. She leads campaign strategies for all Pac-12 initiatives and is at the helm of the overall look and feel of the Pac-12 brand. She also oversees marketing, production and entertainment for all of the Pac-12 championship events including the Football Championship Game at Levi’s Stadium and Men and Women’s Basketball Tournaments in Las Vegas.

With environment being a hot-button topic these days, the veteran marketer will talk about how sports stadiums are becoming more sustainable, eco-friendlier and implementing better waste management systems.

The 28th most populous city of United States – Las Vegas – is inching closer to getting a Major League Soccer (MLS) stadium. It would be a one-size-fits-all stadium – residential, retail and office space around the arena. Though everything is still very much in the nascent state, the Las Vegas City Council has recently green lighted a proposal to sign on the dotted line with California-based Renaissance Companies Inc. to chalk out a blueprint in the next six months for the venue plot – the 62-acre downtown Cashman Center site.

Brett Lashbrook, CEO & Owner, Las Vegas Lights FC, US will speak at the Coliseum Summit US on how to stay organized to keep the venue business running smoothly, help achieve goals and keep fans in good humor. He is in talks with the developers and is ready to sell the USL franchise if Las Vegas manages to get a MLS stadium. Brett Lashbrook and his family own 100 percent of the team. He has agreed to sell the team in a bid to become a MLS franchise. Pro-soccer advocate Lashbrook is playing a key role in the finalization plan of the club’s new 25,000-seat downtown stadium.

AEG Facilities, a stand-alone unit of the world’s leading sports, venue and live entertainment company AEG, is involved in constructing the 65,000-seat Allegiant Stadium at Las Vegas in US. The $1.9 billion domed stadium is all set to open in August 2020 in Paradise, Nevada, and will be the new home of the National Football League’s (NFL) iconic and hugely popular franchise Oakland Raiders (they will relocate from Oakland to Nevada). AEG was made the operator of the stadium last month.

Christopher Sotiropulos, Director Stadium Operations, Oakland Raiders, US, who has played a key role in the development and design of the new Las Vegas stadium, will speak at Coliseum Summit US. He will speak on venue design – the next generation of venues and how stadiums are no longer an isolated project but come with added attractions like retail space, entertainment zones and food joints.

On August 29, 2019, delegates will be taken on a tour of the stadium – ‘Behind the Scenes of Las Vegas Stadium Tour’ as part of the Coliseum Summit US.

The under-construction MSG Sphere venue in Las Vegas is all set to become an architectural marvel with its incredible iconic spherical shape and fully programmable LED exterior. The arena is being built in Paradise, Nevada, the construction work of which began in 2018 and the venue is set to open in 2021. The Madison Square Garden (MSG) Company and the Las Vegas Sands Corporation are partnering to build the arena. Once complete, the sphere-shaped venue will have a capacity of 18,000.

Three people from AECOM, a multinational engineering firm based in Los Angeles and the main contractor for the project, will attend the Coliseum Summit US. Though the cost of the project has not been disclosed, but big dollars are involved. MSG Sphere is expected to produce an annual economic output of $730 million from operation and visitation. On the job front, it will create 4,400 jobs annually once the architectural wonder opens its doors to the public.

AECOM has quite a few plumes to its beret – apart from building the 3-year-old $375 million T-Mobile Arena in Las Vegas, the engineering firm has also built Mercedes-Benz Stadium and State Farm Arena in Atlanta as well as the US Tennis Association Billie Jean King National Tennis Center in Queens, New York.

University of Nevada, Las Vegas (UNLV) in tandem with casino corporation Caesars Entertainment has jointly announced the creation of ‘Black Fire Innovation,’ a technology hub featuring a mock casino, hotel rooms, sports betting area and Esports arena. The 43,000-square-foot space will host, develop and market hospitality products and ideas. To be built at UNLV’s Harry Reid Research and Technology Park southwest of the Las Vegas Strip, the two-story facility will include a student lab, work space and a replica resort and casino with slot machines and table games.

Zachary Miles, Associate Vice-President (Economic Development), UNLV, who is one of the speakers at the Coliseum Summit US, will air his views on brand development. The branding business is very important in stadiums to make a positive impression on the minds of potential buyers. It is not just the stadium which needs brand development but also the clubs they represent. Talking about the Blackfire project he says, “Black Fire Innovation has space you can really test out that idea and build the next prototype, or engage elbow-to-elbow with a corporation to move that (idea) forward to some type of life-changing product or services.”

University of Nevada, Las Vegas (UNLV) fans will have a chance to enjoy college football in luxury and style at the new Las Vegas Stadium when it opens for the 2020 season. But the tickets will come at a premium. The university announced that its all-inclusive VIP Club Seats will range from $2,000 to $2,500 per seat for the season based on contracted commitment and seating location. The facilities include access to the Field Club with open bar and game-day buffet along with on-site parking, but for that the fans will have to loosen their purse strings.

The Coliseum Summit US will also have Venue VIP as a topic in its conference stream. The discussion will center on how VIP clienteles are among the main patrons of a stadium and how this crème de la crème audience gets the best of facilities.

Allied Esports is a premier esports entertainment company with a global network of dedicated esports properties and content production facilities. Their aim is to bring together players, streamers and fans via integrated arenas and mobile esports trucks around the globe. These arenas serve as both gaming battlegrounds and every day content generation hubs.

There has been a huge rise in esports and keeping this in mind, developers are building huge arenas to give fans a lifetime experience. This is being done so that esports lovers get to view matches in a proper ambience rather than on streaming platforms like Twitch and YouTube. In 2018, Allied Esports opened a 30,000 square foot former nightclub inside the Luxor Hotel and Casino in Las Vegas going by the name of HyperX Esports Arena.