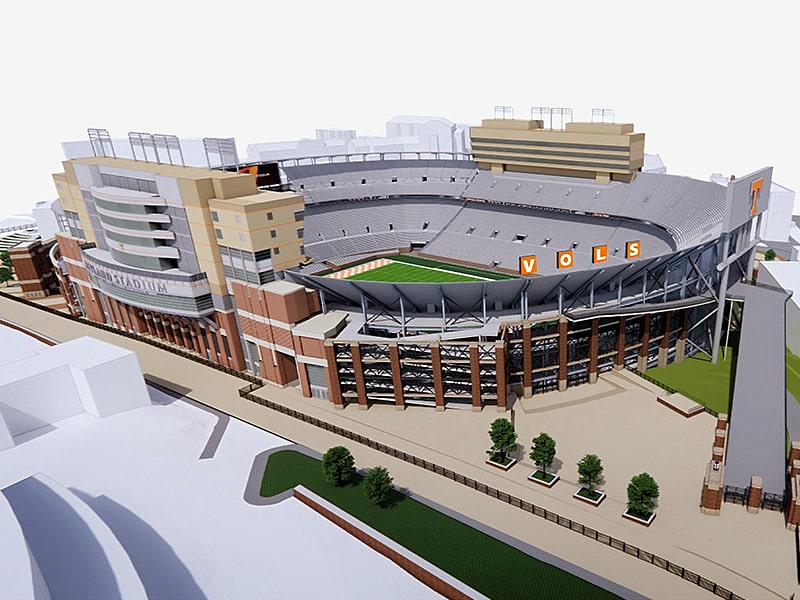 The University of Tennessee (US) Board of Trustees recently approved Tennessee Athletics’ request to adjust the scope and budget of the ongoing Neyland Stadium renovations project originally approved in 2017. The estimated total project budget at the time of the 2017 approval was $340 million.

‘University of Tennessee’ stated that Vice-Chancellor/Director of Athletics Danny White and his leadership team conducted a detailed review of the stadium project and identified new strategic priorities aimed at delivering an unparalleled experience for the University of Tennessee community through impactful and resourceful modifications. The revised project scope requires a total budget increase of $108 million, resulting in an overall Phase I budget of $288 million, which will be fully funded.

The Neyland Stadium is a sports stadium in Knoxville, Tennessee, United States. It serves primarily as the home of the Tennessee Volunteers football team, but is also used to host large conventions and has been a site for several National Football League (NFL) exhibition games. The stadium’s official capacity is 102,455.

Said White, “I appreciate the Board of Trustees for understanding and supporting our revised plan and budget, which will ultimately allow for a significantly enhanced gameday experience for every fan throughout Neyland Stadium. We’ve done a great deal of listening and learning over the past 18 months, and our fans have been instrumental in helping to shape the vision for the future of one of the most iconic sporting venues in the world.”

Added White, “Through our evaluation process, we also developed a new business philosophy prioritizing project elements that generate revenue. That will enable us to invest in key amenities that impact our entire fan base, such as enhanced Wi-Fi, larger concourses, nicer restrooms, and more.”

A critical remaining element in the plan is major and necessary upgrades to the South side and perimeter of the stadium, including the widening of concourses, construction of expanded gates and entryways and provision of additional restrooms and concessions areas. The delivery of this primary component will dramatically improve fan comfort and safety, reduce wait times and allow for more food and beverage offerings.

The project will continue ongoing renovations, which include new amenities delivered for the impending Fall 2022 football season, and will provide annual deliverables through an anticipated project completion date of Fall 2026.

The various project scope adjustments from the 2017 plan ($180 million) to the revised plan ($288 million) are as follows: