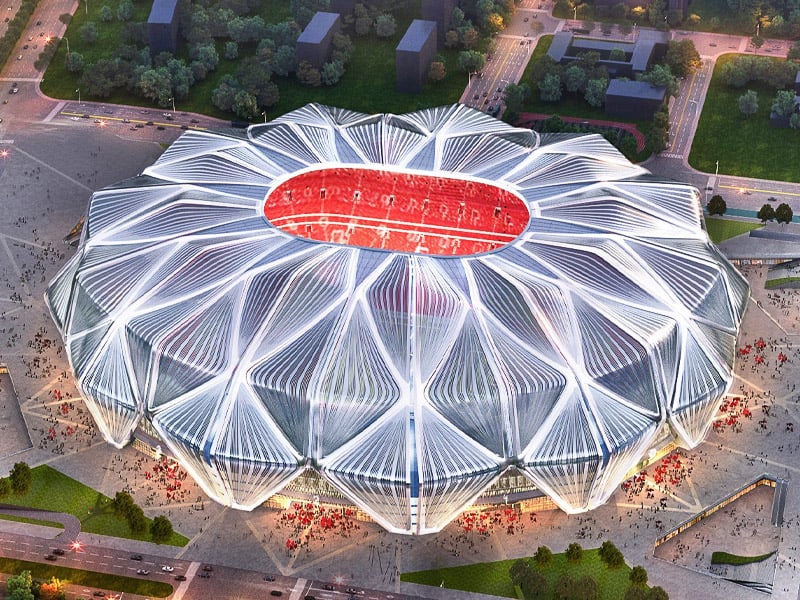 Plans have changed for the world’s largest professional football stadium at Guangzhou in China.

The 100,000-capacity Guangzhou Evergrande Football Stadium will no longer be in the shape of a lotus as was originally planned. The vision in Guangzhou has changed and a significantly different plan is being implemented. The new shape of the stadium will only subtly evoke a ‘lotus crown’.

It was probably the year’s most significant stadium plan announcement made in April this year amid the coronavirus pandemic when global football was brought to a grinding halt. The lotus shape of the stadium invited a lot of attention.

However, as per a decision taken in early July, the stadium will no longer be lotus shaped. A new concept is being implemented, again to be created by global practice Gensler. US-based Gensler was picked up among eight invited architectural teams, which included the likes of AFL Architects, gmp Architekten, HPP Architekten and Populous, among others.

Gensler eventually created three visions for the stadium. On May 28th , the Planning and Natural Resources Bureau of Guangzhou City invited six Chinese experts in architecture and urbanism for consultation, along with members of other municipal bureaus. Based on their input the third vision was selected, and then optimized to meet suggestions, FIFA requirements and economic efficiency.

On July 3, the design was unanimously approved by the Guangzhou City Planning Committee and Regional Planning and Urban Design Professional Committee.

The winning design is not as colorful as the ‘lotus’ one, and has a slight resemblance to a ‘lotus crown’ in keeping with Guangzhou’s reputation as the ‘City of Flowers’. New meanings were created along the way. More angular, the new form can also be read as a diamond, complementing the Panyu district’s meaning in the global jewelry industry.

The metallic, polyhedral form is also meant to bring up high-tech and futuristic associations. But perhaps most importantly, this design should be far more material-efficient than the initial one. The stadium will be adorned with perforated aluminum (ensuring good ventilation), translucent ETFE (ensuring daylight access) and photovoltaic glass (generating clean energy). The diamond form will also help collect rainwater for internal stadium use.

The design may have changed, but the truly impressive scale of the project has not, which will see the stadium’s peak at 86 meters! That’s roughly the height of 30-35 residential floors. Of course, the stadium does not require 35 levels, it will still be eye-catching with seven floors above ground and two underground ones. Up to 4,850 cars and 2,500 bicycles can be parked beneath and directly around the arena.

The mammoth project is likely to be delivered in December 2022, and it will be a watershed moment for Guangzhou with the stadium becoming one of Guangzhou’s main landmarks. One issue still to be ironed out is how to bring 100,000 people to a game and back. The parking places will mostly be reserved for players, staff, VIP guests and representatives from media outlets.

As of today, there are only 10 bus lines within a reasonable radius. That suffices for an average football stadium but surely not for one which can lodge 100,000 spectators. The modern southern train station is 2.6 km away and only one metro line (No. 7) has a stop within 1 km from the plot. A plan of altering new line 22 has surfaced, adding a station close to the stadium. Because line 22 will cross with eight other lines eventually, it should facilitate smooth transfer for many fans.