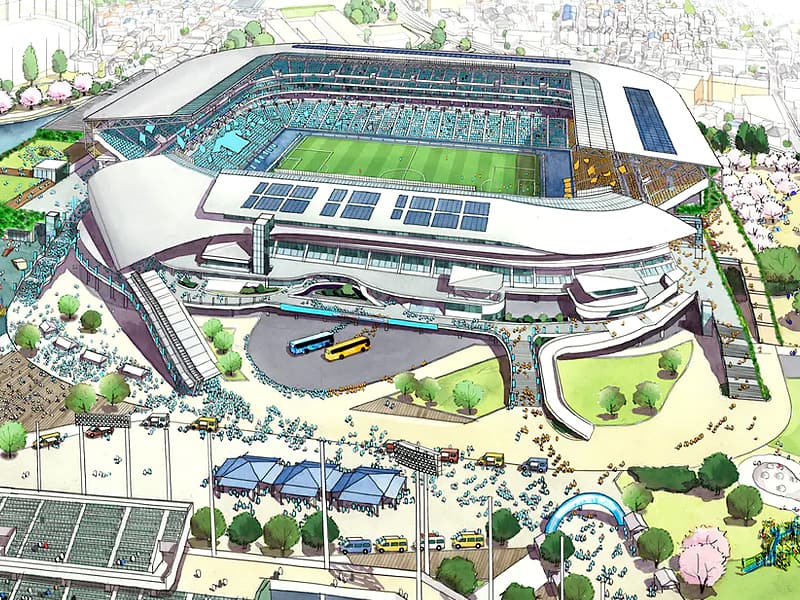 The City of Kawasaki (Japan) has unfurled its amended plan to revamp the municipal facilities within the Todoroki Green Area, and that includes a surprising proposal to reconfigure the Todoroki Athletic Stadium into a purpose-built football stadium.

‘Kawasaki City’ stated that the Todoroki Green Space boasts astonishing amount of green space and a robust urban environment and plans are in place to build sports facilities, cultural facilities and a place for citizens to relax.

The 26,232-capacity Kawasaki Todoroki Stadium, or officially Todoroki Athletics Stadium, is a multipurpose stadium located in Todoroki Ryokuchi in Kawasaki, Kanagawa Prefecture, Japan. It is currently used mostly for football matches and is the home stadium of Kawasaki Frontale.

Kawasaki Frontale is a Japanese professional football club based in Kawasaki, Kanagawa Prefecture, South of Tokyo (Japan). The club plays in the J1 League, which is the top tier of football in the country. Their home stadium is the Kawasaki Todoroki Stadium in the central area of Kawasaki.

The long-anticipated redevelopment of the Todoroki Athletic Stadium had previously been termed by many fans and supporters of the club – as well as the Kawasaki residents – as a “mission impossible” as the City officials had maintained that the City was in need of an athletic stadium to stage international athletic events. The City has stated previously that there was no other site available for a football-specific stadium. The above decision comes as a surprise for many.

‘Kawasaki City’ further stated that the new scheme includes the complete removal of the athletic tracks and the addition of seats to the rear and two side stands behind the goals to increase the overall capacity of the stadium from 27,000 to 35,000. The City has invited the residents to submit their feedback to the plan from June 1st to June 30th and finalize the plan before March 31st, 2022.

The City has also drawn up plans to repurpose the secondary athletic field within the above lush space into a futuristic athletic stadium but has made it clear that the reshaped facility will not conform to standards needed to play host to big-ticket international events.

Once implemented, it would help in driving the economic growth of the area and the new football stadium would act as the fulcrum.

The spokesperson of Kawasaki Frontale, who won three league titles in the last four years, welcomed the City’s proposal stating, “Although what’s on the table at the moment is still an early draft proposal, we really appreciate how the things are developing. Our fans have been struggling to buy tickets as most matches sell out quickly but an increase in the capacity means more fans will have a chance to attend matches. Our goal is to play in a stadium that is welcoming and open to all Kawasaki residents so we hope the new redeveloped stadium will attract many people and provide diverse range of funs to both the local residents and visitors to Kawasaki.”