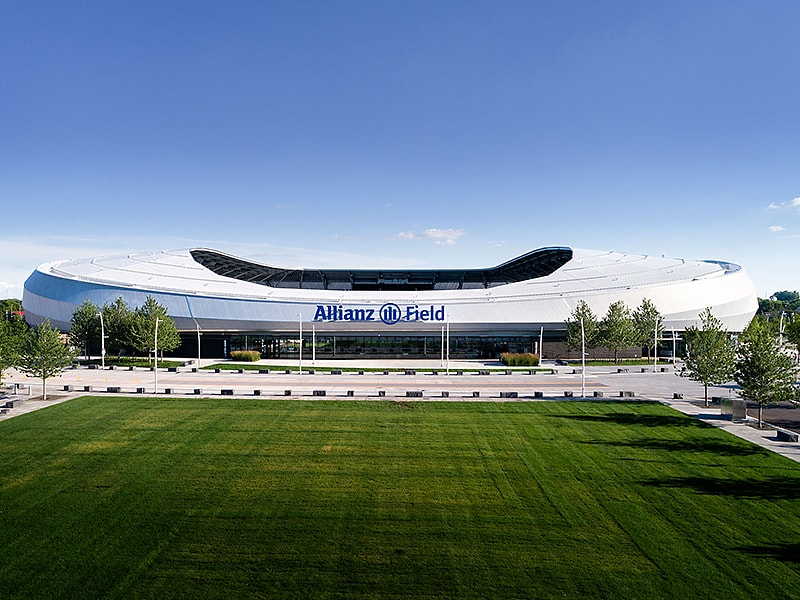 The Minnesota United FC is an American professional soccer club based in Saint Paul, Minnesota, US, that plays in the Western Conference of Major League Soccer (MLS). The club began play in 2017 as the league’s 22nd club, and replaced the North American Soccer League franchise of the same name.

The Allianz Field is a soccer-specific stadium in Saint Paul, Minnesota, home to Minnesota United FC of Major League Soccer (MLS). Opening in 2019, the 19,400-seat stadium was designed by celebrated design firm Populous during the club’s third MLS season. It is located near Interstate 94 and Snelling Avenue.

‘Populous’ further stated that take the stadium’s water conservation efforts as an example. Rainwater that falls on paved areas funnels into underground tree trenches. The process nourishes plants while naturally filtering out contaminants in storm water before it flows back into public pipes.

Hundreds of feet above, the stadium canopy collects and diverts rainwater to a reservoir underneath the Great Lawn, a 28,000-square-foot green space that unfolds to Allianz Field’s North. From there, an estimated two million gallons of water will be filtered and reused each year to irrigate a beautiful urban park full of maple trees and other native plants.

When it comes to being good stewards of the environment, Minnesota routinely ranks among the best in the United States. A 2018 study by WalletHub (personal finance website) listed the State’s water and soil quality as second to none.

The latter measure of soil quality often goes overlooked with the creation of new venues like the Allianz Field. The redevelopment of this once-contaminated and vacant site not only injected new life into the Midway neighborhood it calls home, it also removed toxic substances from the earth. Residents can breathe easy knowing their community’s new gathering space brings new life to the site both above and below the ground.

Shifting the focus from the site’s organic health to the structure itself, Allianz Field’s innovative exterior conserves resources in its own right. Made of lightweight woven fiber glass, the custom-designed skin can span longer distances between steel supports than traditional metal panels.

This one design feature conserved about 100 tons of steel. It not only kept costs low for the privately-funded project but more importantly reduced the building’s carbon footprint in terms of both the manufacturing and transportation of heavy steel supports.

The skin also serves a higher purpose with its bird-friendly qualities. Unlike typical architectural glass that creates a double hazard for birds by reflecting the daytime sky and appearing invisible at night, Allianz’s exterior is clearly visible to the hundreds of species of birds who share Minnesota’s skies.

The Audubon Society and American Bird Conservancy conducted a Bird-Safe Building calculation, with the building’s score of 11.97 falling well below the maximum of 45. At night, the 1,700 energy-efficient LED lights that give Allianz Field its glowing aura are tuned to not disrupt birds’ migratory patterns while still showcasing the building.

Whether it’s in the air, on the ground or below the surface, the Allianz Field embodies Minnesota’s respect for the environment in ways big and small. Fans may not notice it come matchday, but their new home protects the natural resources they cherish so much. It’s yet another example of Populous’ experience designing for Twin City (Minneapolis and Saint Paul in Minnesota) authenticity.

Kansas City, Missouri (US)-based Populous is a global architectural and design practice specializing in sports facilities, arenas and convention centers, as well as the planning and design of major special events.