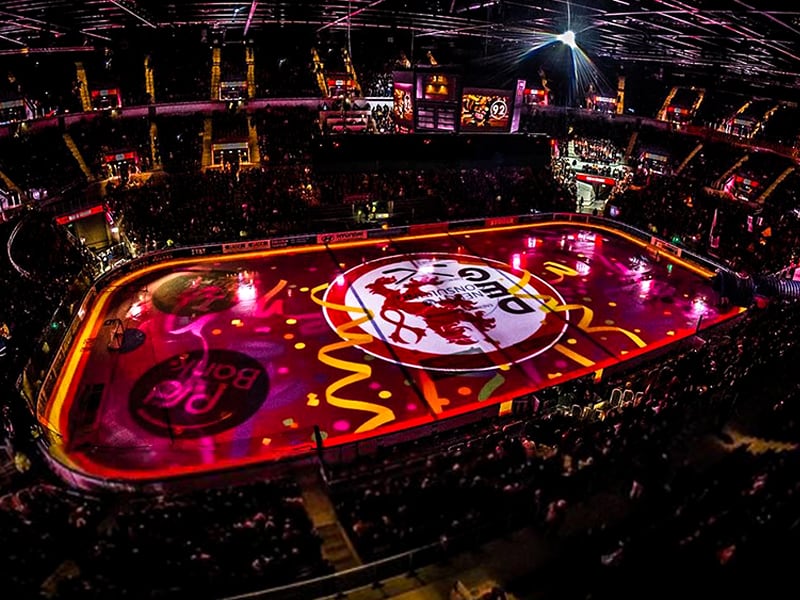 The PSD BANK DOME in Düsseldorf, Germany, the home turf of the ice hockey team Düsseldorfer EG (DEG) since the year 2006, will undergo redecoration for the 2022-2023 seasons.

The ‘Düsseldorfer EG’ stated that the standing room in the East curve and on the straight will be permanently converted to a seating area. A new, compact fan wall is being created in the West stand to facilitate fans to stand together and chant. The new standing room area in the West curve will then sit in the lower and middle tiers. Düsseldorfer EG offers all season ticket holders in the ‘East’ and ‘Straight’ areas the opportunity to stay in their respective spaces for a year at the previous price. They therefore have the choice of standing together in the new DEG wall or sitting in their previous areas – and all at the same price.

The PSD BANK DOME is a multiuse indoor arena in Düsseldorf, Germany, which opened its doors in 2006. The arena can hold up to 12,500 people and 13,400 people for hockey matches. It is used mostly for ice hockey matches, as well as concerts. Its home team is the Düsseldorfer EG.

The Düsseldorfer EG is a German professional ice hockey team in Düsseldorf (Germany). It was Germany’s most successful hockey club for a long time and boasted several international players.

The ‘Düsseldorfer EG’ further stated that the conversion of the multifunctional indoor arena from an ice hockey arena to one that can stage concerts and shows will bring a lot of pecuniary benefits. The standing room area of the arena is gradually showing signs of wear and tear.

Said Gregor Eßer, General Manager, PSD BANK DOME, “We are very grateful to DEG for the joint solution that we have worked out. The reconfiguration of the seating plan eliminates the considerable conversion work. This is a huge relief for us as the hall operator.”

Stated DEG Managing Director Harald Wirtz, “Each DEG fan can make a financial contribution and support the whole restructuring exercise. The fan wall will also help in cost-savings and enable flexible use of the facility.

A fan who previously had a standing room season ticket ‘Straight’ can now sit in the same place and only pay 299 euros instead of the regular 699 or 799 euros for this category.

The above offer also applies to seated season ticket holders in other categories (e.g., Category 4, middle tier), whose season ticket seats fall in a more expensive category due to the new seating plan.

Previous seat season ticket holders in the area of the new fan wall can book a seat in the next higher category at the previous price.

This offer is valid for the 2022-2023 seasons. After that, the regular prices of the respective areas will apply.

Season ticket holders who want to change their seat due to the new hall configuration can go ahead with the same.

Of course, every season ticket holder has the right to cancel their tickets.

Online discussions will be held soon and the first virtual discussion is expected to take place on February 24th, 2022. Details on this will follow shortly.