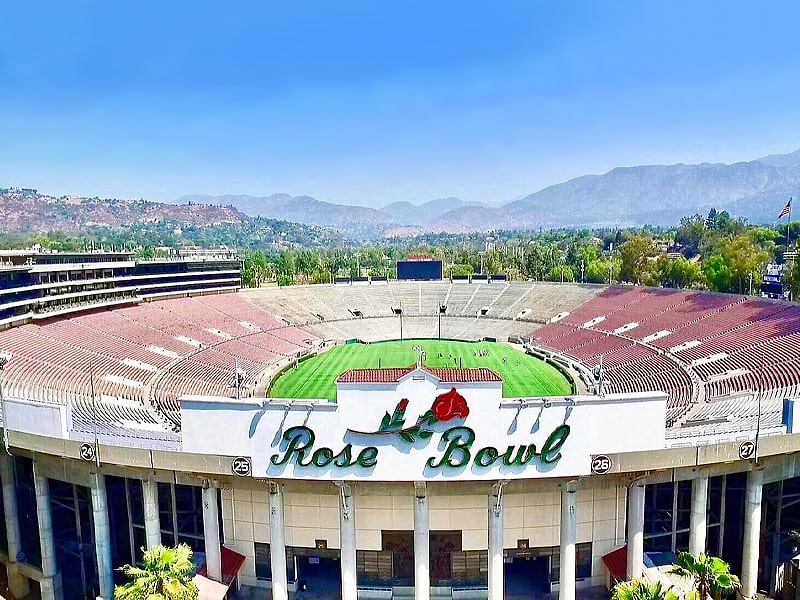 Weiden feels that the 70,000-capacity SoFi Stadium in Inglewood, California, does not boast the kind of backdrop which the Rose Bowl Stadium enjoys and “will never be able to replicate the same”.

‘Rose Bowl Stadium’ stated that Weiden earlier served as the Rose Bowl Operating Company’s Chief Revenue Officer, a position he has held since 2013. During his tenure, Weiden has led a dynamic team that has increased enterprise event revenue by over 500 percent since arriving at the Rose Bowl.

The 90,888-capacity Rose Bowl is an outdoor athletic stadium located in Pasadena, California (US). Opened in October 1922, the stadium is recognized as a National Historic Landmark and a California Historic Civil Engineering landmark.

The Rose Bowl Operating Company (RBOC) is responsible for the governance and stewardship of the Rose Bowl Stadium and Brookside Golf Courses. The RBOC will ensure that the Rose Bowl remains a world-class destination for sporting and entertainment events for all of Pasadena’s residents and visitors.

‘Rose Bowl Stadium’ further stated that under Weiden’s leadership, the Rose Bowl campus became one of the most dynamic entertainment venues in the nation during the COVID-19 pandemic, putting on innovative events that provided safe entertainment during a difficult time. Weiden has also been instrumental in leading the Rose Bowl Stadium Premium Seating and Sponsorship teams and has been integral in attracting world-class musical acts and sporting events to America’s Stadium.

Maintained Weiden, “I am truly honored to continue to build upon the 27-year legacy that Darryl established, supported by an unbelievable team of professionals throughout the RBOC organization. We will work collaboratively with the Mayor, the City Council, the City Manager, and all Pasadena residents to ensure that the Rose Bowl campus remains a world-renowned destination and point of pride for the community. I am grateful to the Rose Bowl Operating Company’s Board of Directors’ confidence in my abilities and leadership, and I am eager to begin the next chapter in our storied history.”

Prior to joining the Rose Bowl Operating Company staff, Weiden worked for the Major League Baseball (MLB) team San Francisco Giants and was responsible for all non-baseball events held at the 41,915-capacity Oracle Park in San Francisco, California. He has also held positions at the 24 Hour Fitness Corp. where he led marketing efforts and was a General Manager for the American Golf Corporation. Weiden holds a bachelor’s degree from St. Mary’s College (California).

Noted Rose Bowl Operating Company Board of Directors’ President Steve Haderlein, “A few years ago, the Board asked Darryl Dunn to develop a deep pool of executive staff to ensure that a transition would go smoothly – and it paid off. We are thrilled that we can stay within the organization as Jens has proven to be invaluable in so many ways during his tenure in Pasadena. We are excited about what the future holds and are confident that Jens, and our entire senior team and staff, will lead us to even greater heights.”

The Rose Bowl Stadium will celebrate its 100th anniversary this year and Jens Weiden is stepping in as General Manager/Chief Executive Officer in time to prepare for the venue’s “party of the century”.

‘Pasadena Weekly’ quoted Weiden as stating, “I think right now is a very interesting time for the Rose Bowl. It will be important in my new role that I focus on listening to stakeholders and help tell the story of how we can ensure that America’s Stadium is relevant for another 100 years. It’s also a time of challenge. We’re a 100-year-old building and we have to stay relevant in the most competitive stadium market in the world.”

Among the competition are the 56,000-capacity Dodger Stadium in Los Angeles and the drop-in-a-swoon SoFi Stadium in Inglewood, California. Weiden said it’s imperative to work hard to ensure that the Rose Bowl Stadium will be around and utilized for another century.

He added, “I love the setting here. That’s what sets us apart from SoFi and other big buildings in town. SoFi wishes they had the beautiful setting here. We have 300 acres of beautiful parkland in the middle of the central arroyo. It’s something SoFi would never be able to replicate. The backdrop here is beautiful. That is the space we manage, and it was a no-brainer for me to take this job.”

The Rose Bowl Stadium, in coordination with the Rose Bowl Legacy Foundation, will celebrate its anniversary on August 13th, with the ‘Party of the Century’.

‘Pasadena Weekly’ further stated that Weiden has replaced Darryl Dunn who has since retired. He is looking forward to working in a larger capacity with the stadium by bringing a new voice “that can speak toward the future”.

Darryl Dunn, former CEO and GM of Rose Bowl Operating Company, US, is a Member of ‘Coliseum Strategic Committee’.

Weiden was raised in Sandpoint, Idaho, a small town of 6,000 in the Northern Area of the State. He attended St. Mary’s College of California, where he played two seasons of baseball. He wrapped up his college sports career with rugby.