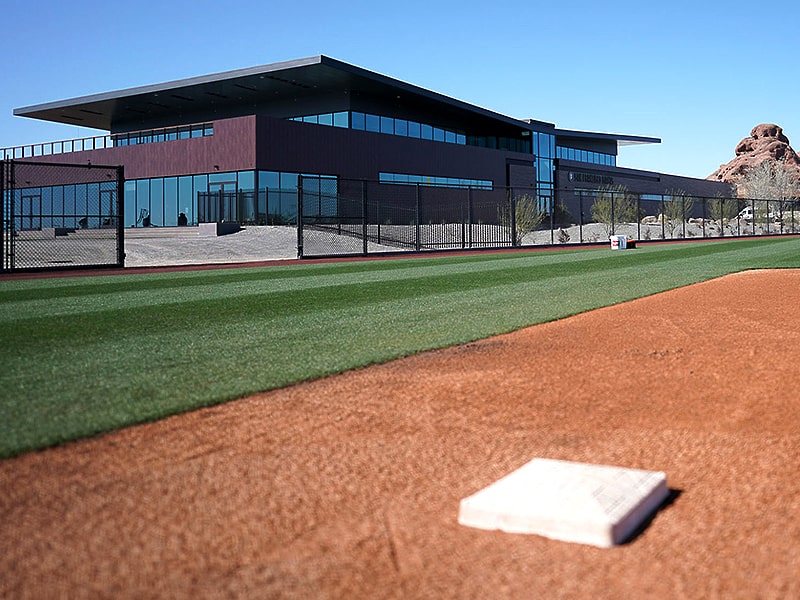 The San Francisco Giants are an American professional baseball team based in San Francisco, US. The Giants compete in Major League Baseball (MLB) as a member club of the National League West division.

The 41,915-capacity Oracle Park is a Major League Baseball (MLB) stadium in the SoMa neighborhood of San Francisco, California, US. Since 2000, it has been the home of the San Francisco Giants. Previously named Pacific Bell Park, SBC Park and AT&T Park, the stadium’s current name was purchased by the Oracle Corporation in 2019.

Populous is a global architectural and design practice specializing in sports facilities, arenas and convention centers, as well as the planning and design of major special events. Populous was created through a management buyout in January 2009, becoming independently owned and operated.

The ‘Populous’ further stated that the San Francisco Giants Player Development Center was designed to incorporate the best features of elite training facilities, allowing the team to prepare players and coaches for both the Minor and Major League seasons. Populous oversaw the master planning for the 33-acre site, which includes six outdoor practice fields (five natural grass, and one synthetic turf), an agility field and covered exterior pitching lanes, also designing and delivering the main clubhouse, an indoor practice facility (which houses a synthetic grass half field and eight indoor batting lanes) and a new field maintenance building. The impressive complex’s project team included building contractor Okland, site and field contractor Frontier Golf and landscape architect iN2iT, among other partners and consultants.

The Player Development Center is designed for ease of use throughout the complex – players enjoy easy access from the main clubhouse and locker rooms to all of the playing fields and indoor areas along a centrally-organized walkway, and direct access to the agility field just outside the weight room doors. Players have the option to practice and train both indoors and outdoors on a mix of natural turf and synthetic turf, allowing them to develop flexible skills throughout the complex. At the center of the complex is a plaza that offers public access for games and exhibitions.

Commented Alfonso Felder, Executive Vice- President of Administration, San Francisco Giants, “We believe that together with Populous and all of our project partners, we have designed, created, built and now opened one of the most innovative development centers in baseball. Providing our players with the best resources to achieve their potential is our priority and we believe our new facility does just that.”

The main structure on site, a 50,000-square-foot Clubhouse Building, offers five player locker rooms, coaching locker rooms, a weight room, player training space, and hydrotherapy on the ground floor. Its second level features two classrooms, a dining hall, office/meeting spaces, and an observation deck with views to all six practice fields. The clubhouse’s sophisticated interior is designed to reflect Papago Park and its surroundings, employing a desert-like palette and incorporating warm, subtle tones and natural materials such as reclaimed wood throughout the space, as well as stunning views of the nearby topography. From the reception atrium with distressed wood finishes and a desert orange leather backdrop, to the dining space and training areas with expansive glass walls for views outside, the clubhouse turns outward and embraces its space.

Adjacent to the Clubhouse Building stands a first-of-its-kind space when it comes to MLB training facilities – a more than 30,000-square-foot building which includes an indoor half field along with hitting and pitching lanes.

Other impressive features of the San Francisco Giants Player Development Center include a new 15,380-square-foot groundskeeping and maintenance building with several sustainable features, including a wastewater recycling system for washing mowers and equipment.

Previously used as the Oakland A’s training facility from 1988-2014 and demolished, the new facility is home to the Giants and its affiliate teams including the Sacramento River Cats Triple-A, Richmond Flying Squirrels Double-A, Eugene Emeralds High-A, and San Jose Giants Low-A teams.