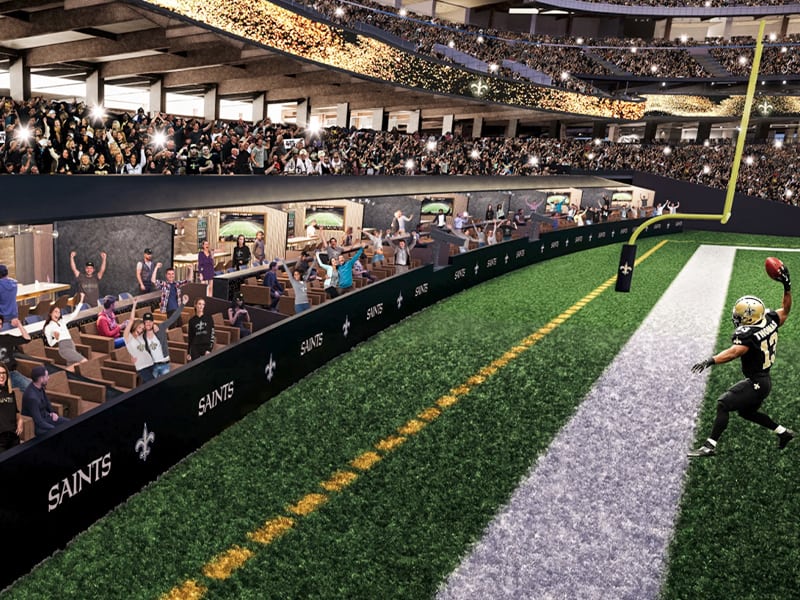 Details of the next phase of upgrades to be lent to the Mercedes-Benz Superdome (US) have been shared by the National Football League (NFL) team New Orleans Saints. The Saints have stated that the addition of field level suites for the 2021 season will take the game experience to a “whole new level”.

The rehabilitation project is due to continue through to the start of the 2023-24 NFL seasons. It will be fully complete in time for the Superdome’s rescheduled staging of the Super Bowl. In October last year, it was announced that the facility will play host to the NFL’s annual season finale in 2025, a year later than planned to avoid a conflict with the Mardi Gras celebrations (read carnival celebrations).

The New Orleans Saints are a professional American football team based in New Orleans, Louisiana (a southeastern US State on the Gulf of Mexico). The Saints compete in the National Football League as a member of the league’s National Football Conference South division.

The 74,295-capacity Mercedes-Benz Superdome, often referred to simply as the Superdome, is a domed sports and exhibition stadium located in the Central Business District of New Orleans, Louisiana, United States.

In November 2019, the Louisiana Stadium and Exposition District (LSED) approved the first phase of a $450m (£329.6m/€364.5m) renovation of the Superdome, with a construction firm appointed and the first renderings revealed for the project.

The Louisiana Stadium and Exposition District is a State agency/political subdivision comprising seven members appointed by the Governor. The board’s primary purpose is to plan, finance, construct, develop, maintain and operate facilities located within the district for events of public interest.

Work has been on since last year after the Superdome staged the College Football Playoff Championship Game on January 13th, with the Saints now further unbolting plans to add field level suites, which are increasingly becoming part of the new wave of NFL stadia.

On December 5th, the Saints began fielding inquiries from fans potentially interested in the 12 suites, which have been separated into three pricing tiers and hold 21-24 seats apiece, including entry to the stadium’s new North End Zone Club Lounge.

The closest seat will be located only yards from the end zone, with the suites offering a variety of food and beverage packages, as well as premium parking and a dedicated gameday entrance.

Jen Martindale, Saints’ Vice-President, Brand Strategy, told mediapersons, “The field level suites will take the Saints’ game experience to a whole new level. In addition to being the closest seats to the field, these suites are the most luxurious, comfortable spaces in the Superdome.”