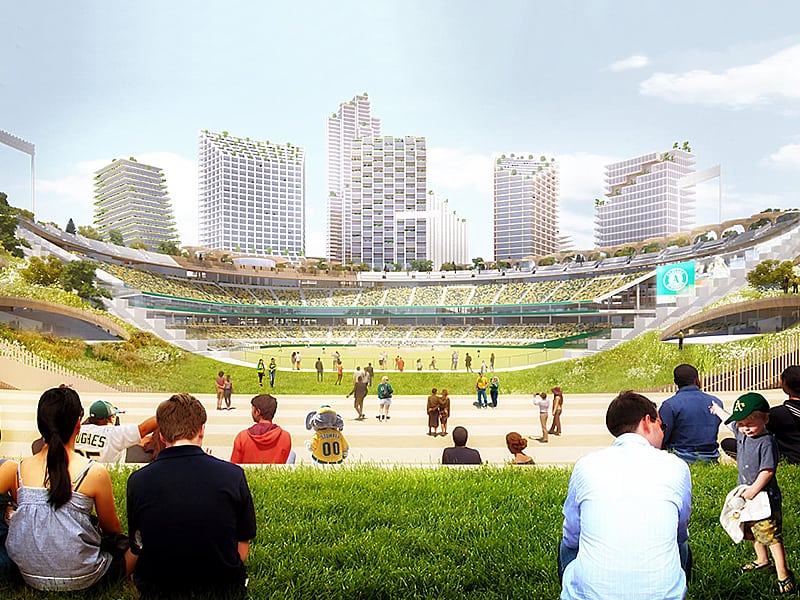 Worried over the snail pace progress in their efforts to privately finance a new chic ballpark in downtown Oakland (US), the ‘A’s’ have begun looking for greener pastures.

‘The A’s’ stated that the above decision comes after the Major League Baseball (MLB) issued a statement on May 10th instructing the ‘A’s’ to explore other markets as they continue to pursue their proposed waterfront ballpark near Howard Terminal in Oakland.

The Oakland Athletics, often referred to as the A’s, are an American professional baseball team based in Oakland, California (US). The Oakland Athletics compete in Major League Baseball (MLB) as a member club of the American League West division. The team plays its home games at the 63, 132-capacity Oakland Coliseum.

Oakland-Alameda County Coliseum, also known as simply Oakland Coliseum, and branded as RingCentral Coliseum for naming rights reasons, is a multipurpose stadium in Oakland and serves as the home arena of Oakland Athletics.

A statement out by the League stated, “MLB is concerned with the rate of progress on the A’s new ballpark effort with local officials and other stakeholders in Oakland. The A’s have worked very hard to advance a new ballpark in downtown Oakland for the last four years, investing significant resources while facing multiple roadblocks. We know they remain deeply committed to succeeding in Oakland, and with two other sports franchises recently leaving the community, their commitment to Oakland is now more important than ever.”

Dave Kaval, President, Oakland Athletics, US, was one of the Speakers at the ‘Coliseum’ Online Europe Conference held in March 2021.

The A’s proposed project at Howard Terminal includes a plan for 3,000 new homes in addition to a new 34,000-seat stadium, 18 acres of new parks and open spaces all around the area. ‘A’s’ President Dave Kaval has urged Oakland City Council to vote on the new stadium project before summer recess, which begins July 28th and runs through August 31st.

‘The A’s’ quoted Dave Kaval as stating, “It’s important to remember that we made a proposal to the City that they’re sitting on. We’re hopeful that they take that up before the summer recess. It’s a really robust financial offer to privately finance the stadium, invest $12 billion in private capital and have $450 million in community benefits. That’s something that we’ve advanced as an organization. I think it’s important that people know that and know we’re still pushing towards that. But at the same time, we’re running out of time here at the Coliseum.”

The current lease on the Oakland Coliseum, which the ‘A’s’ have called home since 1968, expires in 2024. Though some view the Coliseum grounds as an acceptable site to build a new facility, the A’s and MLB have both taken the position that the present site is not a viable option for the future of the club. Kaval cited a recent issue at the Coliseum on April 20th in which a light tower went out in the upper deck of the stadium – causing a 25-minute delay – as evidence that the ‘A’s’ need to find a new home sooner rather than later.

Affirmed Kaval, “The existing facility is past its useful life. We had the lights go out the other night and couldn’t even get a game going. I think MLB is really seeing very clearly, and we agree with them, that with a lease only through 2024 and probably the earliest a ballpark can be built at Howard Terminal is 2027, we really need to start looking at some other options to have some viable alternatives for the club.”

Expanding on why the Coliseum is not seen as a desirable spot, Kaval said it is not fit for “baseball in the 21st century” based on the targeted areas for new spiffy ballparks that have opened up around the League in recent years. To buttress his argument, Kaval pointed to the National Football League’s (NFL’s) Las Vegas Raiders and the National Basketball Association’s (NBA’s) Golden State Warriors – who both left the site over the past few years.

He added, “It’s important for people to understand that the most successful Major League ballparks are in downtown urban locations where people can walk, bike, come from their work or their living to the stadium for 81 days. The location here at the Coliseum – two teams have already left this location. It’s just not a site that is conducive to the 21st century and not one where Major League Baseball would ever approve a group building. It’s really important that people understand that really our options in Oakland are limited to a downtown option, and that’s Howard Terminal.”

The ‘A’s’ will work in close collaboration with the MLB to determine the best Cities to consider, though Kaval said the final specific locations will be determined by the League.

Kaval continued, “We have a fully funded plan at the waterfront that we think is really tremendous with a great vision. But at the same time, we are going to start exploring other markets and talking to other communities. We need to have options and take the direction of Major League Baseball to ensure that we really advance the viability of the franchise for another generation.”

The Oakland Mayor, Libby Schaaf, issued a statement urging the team and the community to find common ground, “We share MLB’s sense of urgency and their continued preference for Oakland. Today’s statement makes clear that the only viable path to keeping the ‘A’s’ rooted in Oakland is a ballpark on the waterfront. We have made great strides with the Governor’s certification and release of the Environmental Impact Report (EIR). Now, with the recent start of financial discussions with the ‘A’s’, we call on our entire community — regional and local partners included – to rally together and support a new, financially viable, fiscally responsible, world-class waterfront neighborhood that enhances our City and region, and keeps the ‘A’s’ in Oakland where they belong.”

« Previous News: Community first in Bologna home revamp
» Next News: Fans to be greeted back in England stadia