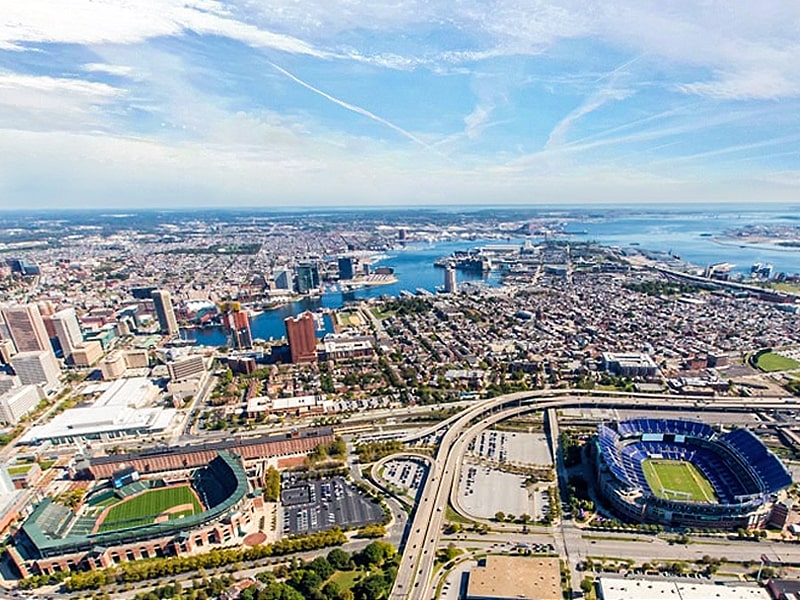 A 10,000-seat soccer stadium could be coming to Port Covington in Baltimore, Maryland (US) depending on the results of a feasibility study requested by the Mayor of Baltimore, Brandon Scott.

‘Baltimore Fishbowl’ stated that the Maryland Stadium Authority (MSA) voted 4 to 0 on July 5th to explore the feasibility of constructing a soccer stadium somewhere in Baltimore City, and to make the Port Covington renewal district one of the areas under consideration.

Port Covington is a neighborhood in Baltimore, Maryland (US). Previously, Port Covington was a railroad terminal built by the Western Maryland Railway in 1904 on the Middle Branch of the Patapsco River.

Port Covington is a former industrial area in South Baltimore that is being transformed to a mixed-use community with housing, offices, shops, and recreational use. The largest single parcel is a 235-acre tract with some land already targeted for recreational and open space.

The Maryland Stadium Authority (MSA) was established by the General Assembly in 1986. The original mission was to build, manage and maintain quality facilities to retain Major League Baseball (MLB), and return National Football League (NFL) football to Maryland. MSA is committed to enhancing the Maryland experience for those who live, work and visit here.

Jeffrey Provenzano will be one of the Speakers at the Coliseum Summit US to be held in Los Angeles on September 28th+29th, 2022.

‘Baltimore Fishbowl’ further stated that the vote came after Al Tyler, Vice-President with the Stadium Authority’s Capital Projects Development Group, told the Board that Mayor Scott asked for the study and for the State to pay one-third of the study’s cost.

Tyler said Scott did not have a specific site in mind for the stadium but wanted Port Covington to be considered – “The stadium will host an organization by the name of ‘Right To Dream’ as its primary tenant. ‘Right to Dream’ follows an academy-style model that uses soccer as a means to provide educational and athletic opportunity to under-privileged children. It’s very similar to the…IMG Academy.”

The IMG Academy is a boarding school in Bradenton, Florida (US) that offers academic classes and sports training.

The academy “operates on a campus, which usually includes residential and academic buildings as well as a multipurpose stadium,” Tyler said.

Added Tyler, “The other thing that the stadium is envisioned to host is a men’s and a women’s USL [United Soccer League] professional team that ‘Right to Dream’ has the exclusive rights to operate.”

Tyler told the State Board that the City of Baltimore and Right to Dream “envision that the residential and academic buildings will be privately-funded and they’re envisioning that the stadium be publicly-funded and owned and operated by the Stadium Authority.”

Tyler explained, “This study includes a market and research analysis related to professional soccer and the USL in Baltimore to see what that activity would generate as well as what any other sort of multiuse, multipurpose activity would generate in Baltimore as well as an operational and economic impact analysis from owning and operating a new stadium in the City of Baltimore,” so State officials will have information about what impacts the project would have.

The study will cost $62,000. Tyler said the City of Baltimore and private funding sources would cover two-thirds of the study’s cost, roughly $41,333, and Scott asked the stadium authority to pay the other third, roughly $20,667. Members were told that State funds are available to pay for the study in the fiscal year that began July 1st.

Tyler stressed that the Mayor does not have a specific City site in mind for the soccer stadium, except that he wants Port Covington to be considered – “It’s not otherwise site-specific. There is a potential site that the ‘Right to Dream’ and the City of Baltimore folks are talking to Port Covington about. However, this is a non site-specific, other than the City of Baltimore, effort.”

Agreeing to work on the study does not in itself represent a commitment to move ahead with the project or take an ownership interest, he added.