Spick-and-span key mantra in US venues 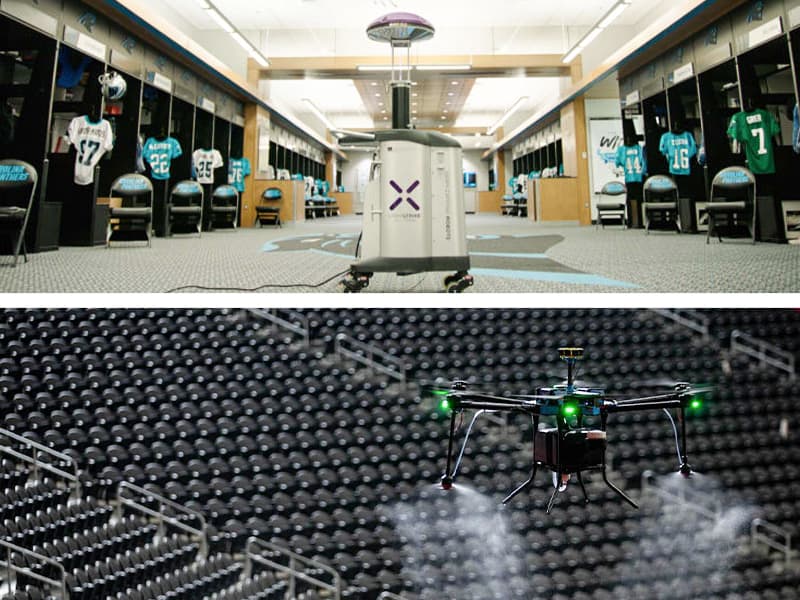 With COVID-19 still spreading like wild fire in the United States and simply refusing to die out, cleanliness has become the catchphrase and many venues are hopping on the ‘squeaky clean’ bandwagon and are leaving nothing to chance.

Mercedes-Benz Stadium in Atlanta, Georgia (US) has called in a fleet of drones as part of the stadium’s cleaning protocols taking into cognizance the dangerous scenario which coronavirus is creating in the country.

Mercedes-Benz Stadium is a multipurpose stadium located in Atlanta, Georgia, US. Opened in August 2017 as a replacement for the Georgia Dome, it serves as the home stadium of the Atlanta Falcons of the National Football League (NFL) and Atlanta United FC of Major League Soccer (MLS).

Known for its novel methods, Mercedes-Benz Stadium has teamed up with Lucid Drone Technologies, a cutting-edge company based out of Charlotte, NC, that provides D1 disinfecting drones in order to sanitize key areas in a flawless manner.

The technology has been tested as part of the sanitization process and will be implemented as the stadium team welcomes fans back for the NFL Atlanta Falcons’ home game against the Carolina Panthers on October 11th.

Dietmar Exler, COO, AMB Sports and Entertainment, commented, “The process of welcoming fans back involves actively listening and responding to their concerns and we understand that proper cleaning and sanitization protocols are top of mind in the current environment. We have worked tirelessly to provide a safe environment for not only our associates, players and staff, but especially our fans.”

Even in a pre-COVID world, stadium operators were exploring the utilization of drones, but the whole process got expedited due to the pandemic, making the Mercedes-Benz Stadium the first professional sports stadium to adopt this cutting-edge technology.

The drones utilize electrostatic spraying nozzles for even distribution of medical-grade disinfecting chemicals including an inhibitor that prevents harmful bacteria and virus to adhere to surfaces without leaving a residue.

Apart from this, their unique, wrap-around effect helps distribute the disinfectant to hard-to-reach areas. The non-toxic Hypochlorous Acid solution used is in tune with the Environmental Protection Agency (EPA) for maximum effectiveness without being harmful.

As COVID-19 continues its onslaught in the US, stadium leadership worked with Lucid to implement its purpose-built drones that were designed specifically for disinfecting large facilities.

This technology will be used for post-event disinfecting of the seating bowl, handrails, and glass partitions at the venue. The drones allow for a 95 percent reduction in time spent cleaning the seating bowl and the ability to redeploy associates in other areas of the stadium and 14 times more efficacy than the regular backpack foggers. It is no run-of-the-mill kind of disinfecting method.

Jackie Poulakos, Manager, Building Operations, commented, “This stadium is incredibly large and as we begin to slowly welcome fans back, these drones allow us to maximize the time between games and private events to thoroughly sanitize. We are always challenged by leadership to continually innovate and this new technology is the ideal solution to effectively disinfect and sanitize our stadium in an efficient manner.”

The drone is the latest addition to the Mercedes-Benz Stadium cleaning and sanitization program, which includes daily cleaning using GenEon’s ionized solution that kills harmful germs and bacteria, while causing no harm to humans.

Additionally, the stadium added a sanitation team for hourly disinfecting, 600 hand sanitizer dispensers and monthly anti-viral coating to help reduce the risk of exposure and spread of the fatal virus.

Venue operators in US – going by the monstrous form of coronavirus – are bending over backwards to ensure stadiums are thoroughly clean in every corner as well as germ-free so that when fans come back to the stadia they do not have worry lines on their foreheads and can put their hair down and enjoy the game.

In Charlotte (US), two robots go from one place to another and emit strong UV light to disinfect spaces throughout Bank of America Stadium.

Bank of America Stadium is a 75,523-seat football stadium located on 33 acres in uptown Charlotte, North Carolina, United States. It is the home facility and headquarters of the Carolina Panthers of NFL, and is planned to be the home of Charlotte FC of MLS.

Carolina Panthers have acquired two mobile robots (considering adding more), each supposedly worth $125,000, in order to disinfect spaces around its residence – Bank of America Stadium. Usually used in hospitals, such robots can kill germs in up to 60 regular hospital rooms per day. At the football stadium they were first used to clean players’ facilities. But now the use has been expanded.

“We began using the robots to disinfect the locker rooms, weight room, rehab areas and offices during camp, and we’ve expanded utilization throughout the building and throughout the stadium,” Eddie Levins, Director of Security and Infection Control Officer, said.

“We can use it in suites, we are using it in any public space that needs a quick sanitization. We clean it, and then we disinfect it so that people can feel safe coming in here again,” Levins added.

Because of their adverse health effects, the UV light beams cannot be used when people are present. But the solution supposedly works very well and is also used to clean players’ helmets after every training session.

Both Carolina Panthers and Atlanta Falcons are preparing to welcome supporters back at their respective NFL stadia.

As per the decision of Governor of North Carolina Roy Cooper, Bank of America Stadium can hold up to seven percent of its regular capacity, which means 5,200 people.

Atlanta Falcons will be able to welcome a similar number, 5,700 fans. Further opening of each stadium would depend on the COVID-19 situation locally and Statewide.