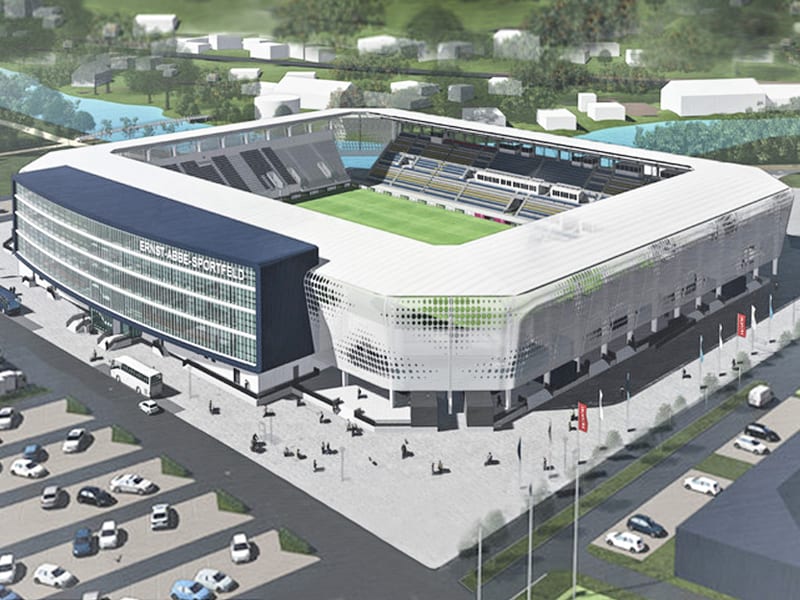 The coordinated design of the new Ernst Abbe Stadium in Jena, Germany, was presented on September 30th, 2020, and attracted a lot of media attention. Representatives of the City of Jena, the stadium operator EAS Betriebsgesellschaft mbH, the investors and German football club FC Carl Zeiss Jena as primary users of the facility were all agog about the final design. The new stadium will be a focal point of attraction for the citizens of Jena – the new home of football.

Construction work on the stadium in Jena can begin as the City handed over the stadium to the EAS operating company and the venue is expected to be completed by mid-2023 so that the 2023-24 seasons can begin in the new, completely covered stadium.

Ernst Abbe Sportfeld is a sports facility in Jena, Germany. It was dedicated on August 24, 1924, and was named after entrepreneur Ernst Abbe 15 years later. The facility is in southern Jena, directly on the Saale River. The City of Jena purchased the stadium from the Ernst-Abbe-Stiftung in 1991.

FC Carl Zeiss Jena is a German football club based in Jena, Thuringia. Since German reunification in 1990, the club have competed no higher than the second tier. In the 2020–21 seasons, Jena is playing in the Regionalliga Nordost.

The Regionalliga Nordost is the fourth tier of German football in the States of Berlin, Brandenburg, Mecklenburg-Vorpommern, Saxony-Anhalt, Saxony and Thuringia. These comprise the States of former East Germany as well as West Berlin.

The planned facility will be able to accommodate 15,100 onlookers and it will be constructed in such a manner that it sits well for all DFL (German Football League) fixtures. Structure wise, a homogeneous, modern stadium area will be created while retaining the West stand (presently the main stand). A distinctive stadium complex awaits the guests against the backdrop of majestic mountains. Big-ticket events can be held in the facility and players will get better training facilities. The newly created artificial turf pitch will help during inclement weather.

Though the new venue will be lent a futuristic touch, it will still retain the pristine sheen of the club: Apart from the West stand, the legendary T-building as well as the Zeiss lens will form key parts of the ensemble.

The new arena will be rounded off with 800 VIP seats, eight boxes for 110 people, 370 new parking spaces, a functional building in the East stand with a total area of circa 5,500 m² for events which can be attended by up to 800 people and a new talent center to tap the potential of young guns as well as a rest area. The future Ernst-Abbe-Sportfeld will spread over 10 hectares of land and a permanent food joint will also come up.

The structure will be floodproofing. Better facilities will be provided to the cops on duty at the arena, the fire brigade personnel as well as the other rescue services people.

Women’s football will also go on to benefit in the new venue with an office and cabin exclusively for their use.

Varsity sports will get a shot in the arm once sweeping changes are brought to the Wöllnitzer Strasse location. Popular sports in Jena like utilizing the stadium ring for annual events such as the Paradise Triathlon or running and cycling fixtures will get a boost once the new facility is complete.

Remarked Jena Mayor Thomas Nitzsche, “The new Ernst Abbe Stadium will be a stadium for entire Jena and can be utilized in serveral ways. I am convinced that the new tendering model – planning, construction, operation and financing come from a single source – and will ensure the long-term economic success of the stadium and the City will benefit from it in many ways.”

Mayor Christian Gerlitz commented, “The new Ernst Abbe Stadium is part of a large number of urban development projects that will shape the future of Jena in the coming years and will send a signal far beyond it. Jena will emerge as a City boasting best infrastructure in sports, for citizens, for guests and business partners. But it is also crucial that the nearby Oberaue area – a green oasis – which lies in the vicinity is handled sensitively so that the sustainable quotient of the stadium is maintained.”

Stated Sports Director Benjamin Koppe, “The redesigned area and the athletics facility on Wöllnitzer Strasse that was built in connection with the new facility are another important component in relation to the continuous development of the City’s sports infrastructure. The new football stadium will be an important meeting place due to its versatile nature not only for sports, but also for different event formats and gastronomy. I would particularly like to thank the investors for their commitment.”

Lars Eberlein, Managing Director of JenArena KGm stated, “In the beginning of 2014, the Sparkassen Arena opened. A key component of the financing at the time was third-party marketing with events outside of sport. The same policy is being adopted with the new arena now. With our experience, we want to take the right decisions right from the start. We have a clear marketing strategy for the stadium and the arena. We are convinced that we will be able to operate the stadium economically.”

Andreas Kuhn, Managing Director of EAS Betriebsgesellschaft mbH, put in, “With the new construction of the stadium and the redesign of the arena, the Ernst-Abbe-Sportfeld is being realigned as a modern sports and events facility. For this purpose, important tasks and new functions have been taken into account in the planning stage. The new stadium as the home ground of FC Carl-Zeiss Jena will be a modern arena with a little over 15,000 seats, in which all football fans as well as families alike will feel comfortable. The new functional building with a total usable area of approximately 5,000 m², which offers space for varied private or public events, will also offer huge opportunities for the City of Jena.”

Kuhn added, “The historical components of the old stadium will be preserved and all credit goes to the architectural body IBA. To keep intact the historical value, the old T-building with the tower, the Zeiss lens and the clock will be retained. A new museum for fans will be built which will serve as the meeting point of supporters. A portion of the old stone wall which forms the entrance to the present marathon gate will also be retained. The objective of the venue operators is to restructure the Ernst-Abbe-Sportfeld into a meeting point for the young and the old alike.”

Klaus Berka, President, FC Carl-Zeiss Jena, observed, “Once construction work on the new stadium starts, a long-cherished dream of all football fans will be realized as well as sports lovers. A lot of hurdles had to be overcome to get the nod to build the new venue. The new arena will boast state-of-the-art sporting infrastructure – for children, for young footballers – boys and girls as well as professional soccer players – men and women. We will try to give back 100 percent for all the investment that has been done to give FC Carl Zeiss Jena an advanced stadium and will also create an environment in the stadium perfect for family.”

Chris Förster, Managing Director, FC Carl Zeiss Jena Fußball Spielbetriebs GmbH, noted, “The construction of the new stadium in Jena is a dream come true for football fans in Jena. At last, the football buffs of Jena will get to savor the game in a futuristic facility and the new arena will also acts as an urban development milestone. The new stadium will also provide us vistas of marketing opportunities which is crucial for financing professional football. We are eagerly waiting for the opening of the new stadium that will provide the electrifying atmosphere experienced in a stadium on game day.”