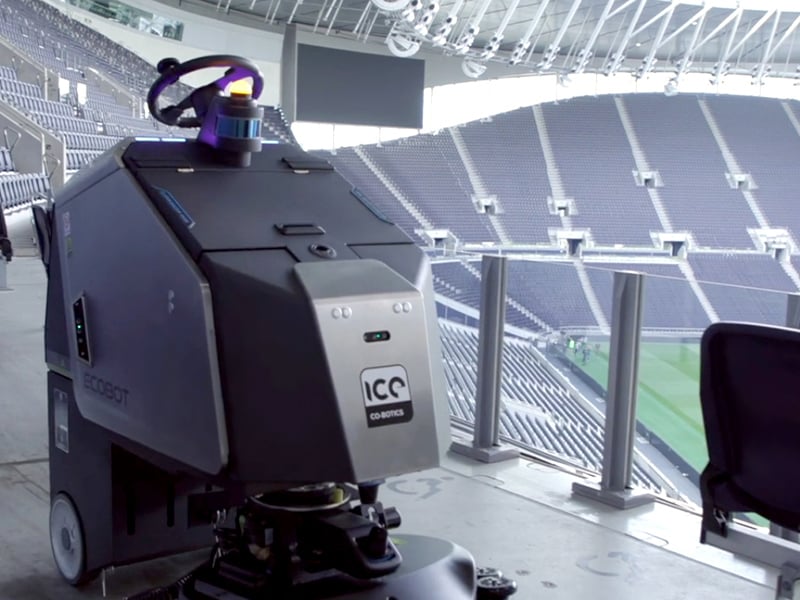 With the Premier League (UK) season getting off to a start and stadia welcoming capacity crowd, the Tottenham Hotspur Stadium has become the first in the world to utilize a new revolutionary robotic cleaning technology to help keep supporters safe.

The ‘Tottenham Hotspur’ stated that the above technology was applied in the ‘Spurs’ Premier League season opener against Manchester City F.C. on August 15th in the former’s home.

The 2021-22 Premier League is the 30th season of the Premier League, the top English professional league for association football clubs since its establishment in 1992. It started on August 13th, 2021 and will end on May 22nd, 2022.

The Tottenham Hotspur Football Club, commonly referred to as Tottenham or Spurs, is an English professional football club based in Tottenham, London, which competes in the Premier League, the top flight of English football.

The Tottenham Hotspur Stadium is the home of Premier League club Tottenham Hotspur in North London, replacing the club’s previous stadium, White Hart Lane. With a seating capacity of 62,850, it is the third-largest football stadium in England and the largest club stadium in London.

The ‘Tottenham Hotspur’ further stated that the club has introduced a fleet of Eco Bot 75’s, from ICE Co-Botics, to clean and disinfect large areas of the stadium, whilst valuable labor resources continue to focus on sanitizing and deep cleaning – something that is now more important than ever as we emerge from the COVID-19 pandemic.

Furthermore, the Eco Bot 75 is environmentally friendly and is designed to operate continuously for six hours on a single power charge. The revolutionary robot has a state-of-the-art four stage filtering system that ensures 70 percent of its water usage is filtered and recycled without affecting the standard of clean. To date, by using the Eco Bot 75’s, the club has saved over 1,300 liters of water.

The Tottenham Hotspur was recently announced as the Premier League’s greenest club, following a study carried out by the UN-backed Sport Positive Summit and BBC Sport, having implemented a range of sustainable measures across its stadium and training centre.

Paul May, Head of Stadium Operations, Tottenham Hotspur, said, “We are always looking for innovative ways to improve our cleaning standards – with a large team working around the clock to ensure our 62,850-seater stadium is ready for the safe return of fans. Co-Botics allow us to enhance our staff performances, making the cleaning operation even more thorough and covering vaster areas in a shorter amount of time. As matches and events return to our stadium, it has never been more important to ensure we have a clean and safe environment for our fans.”

Darren Marston, Chairman of ICE, put in, “We are delighted that Tottenham Hotspur share our long-standing belief and have the vision to invest in a meaningful fleet. The demand for Co-Botics is really gathering pace and we have a strong order book fueled by the heightened priorities for infection control at an appropriate distance. Tottenham Hotspur is certainly on the front of the curve, demonstrated by integrating these machines into the daily cleaning operations of such an iconic stadium.”

« Previous News: With Messi catch, PSG looking to expand home
» Next News: ‘Whites’ set to bloom in riot of colors