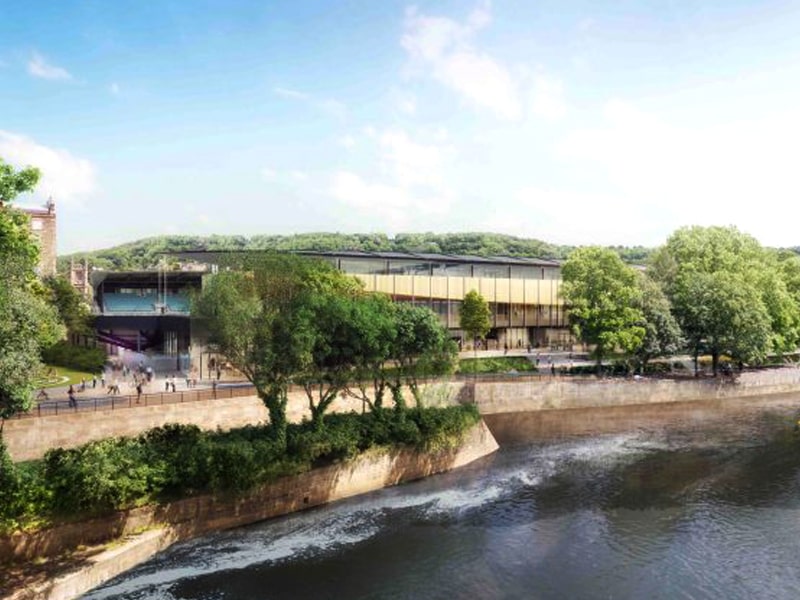 The Stadium for Bath in England has announced final review to the detailed design of an arena planned at the Rec ahead of a planning submission. The Recreation Ground (commonly known as the Rec) is a large open space in the centre of Bath, England, next to the River Avon. It is hoped that the revised planning permission will be made in the first half of 2020.

The stadium authorities took this decision following threadbare discussions with residents and representatives of the City as regards proposals to breathe fresh lease of life to the riverside between Pulteney Bridge and North Parade in order to create a new, world-class community and sporting stadium at the Rec.

The basic design changes include: The overall height reduction will stand at 5.1 m; parking spot which can fit in 550 cars and provides blueprint for electric vehicle usage in the city; mature trees retained along riverside with enhanced public realm design; improvising the West, East and North stands which provides sweeping views of the local landmarks; and advanced hybrid playing surface which can be used the year round.

Throughout the process, feedback has been sought from a cross-section of people living close by to the Rec as well as from a broad range of stakeholders vis-a-vis the unique project. The team held a detailed discussion with B&NES officers, Historic England and the Environment Agency along with other statutory stakeholders and Bath Preservation Trust.

If the go-ahead is given and everything goes on track, the new venue which can fit in 18,000 fans will not only retain Premiership Rugby in the heart of the City but also herald economic boom and citywide benefits. The coming up of the stadium will generate job opportunities in the construction, operations and hospitality sector, and offer a multi-million pound boost to the City’s economy per annum in the form of visitor spending.

Tarquin McDonald, Bath Rugby Chief Executive, commented, “For 125 years we have played our rugby at the Rec. This project is about the next 125 years and beyond. Keeping sport in the heart of the city is the catalyst for this project, but we are also incredibly proud of the opportunity to regenerate the riverside creating an amazing place for everyone to enjoy; of the significant social legacy we will build through the delivery of education and employment programs being run on the site every day of the year and of the opportunity to promote grass roots community sport.”

McDonald added, “We are passionate about the potential to support electric vehicle take-up in Bath; and of the significant boost Stadium for Bath will bring to our local economy. We have taken time to revisit and challenge every aspect of the design philosophy and to review how best to draw on Bath’s amazing architectural heritage – in particular its World Heritage Outstanding Universal Values – and we look forward to submitting a planning application which we hope will be early in the New Year.”

To pave the way for a flourishing local economy, the Bath & North East Somerset Council takes the onus of reducing air pollution and congestion in the City. To this end, a considerable amount of money will have to be invested to reduce traffic snarls and introduce electric vehicles.

Stadium for Bath will streamline the entire parking scenario in the city, it will maintain city parking provision at current levels and will help reduce parking hassles at other sites like Avon Street, with the benefit of reduced cross city traffic from spaces located nearer to the eastern approaches.

The concealed under-pitch car park located conveniently close to the City center, yet outside the historic core, will open up scope for pedestrianisation and help in boosting Bath’s economy.

The car park will provide proper framework to encourage Bath residents to go in for electric vehicles by more than doubling the daytime city centre electric vehicle charging provision. For residents using on-street parking, such as those living in flats, charge points will also be made available overnight.

Once the stadium opens, shower and changing facilities will be opened for a dedicated cycling commuter club. Stadium for Bath will also provide extensive accessible spaces and provision for bicycles.

The Stadium for Bath plans to submit its planning application to Bath & North East Somerset Council early next year. Once the application is submitted, members of the public can give their feedback on the application directly to the Council.

Leading design practice Grimshaw is the main architect for the project. It is entrusted with translating into reality the vision for a new arena with community at the heart in Bath – a certified UNESCO World Heritage Site.

The design aesthetic and stadium experience will be at the core of the overall design solution. The essential ingredients of a successful design will be the smart use of space at the site, the design of internal and operational spaces, and the landscape setting of the stadium. To facilitate the same, Grimshaw has therefore appointed two further practices, Kay Elliott and Gross Max, as sub-contractors to further sharpen the design prowess on this unique project.

Kay Elliott is the Destination and Interiors Architect of the stadium. Kay Elliott will give a good look and feel to the new stadium. Internal areas include hospitality, player areas, bars and toilets, together with non-match day uses such as conferencing and banqueting.

Gross Max will lead on riverside design and the public realm to make certain that they are made to the standard which matches with the stature of Bath.