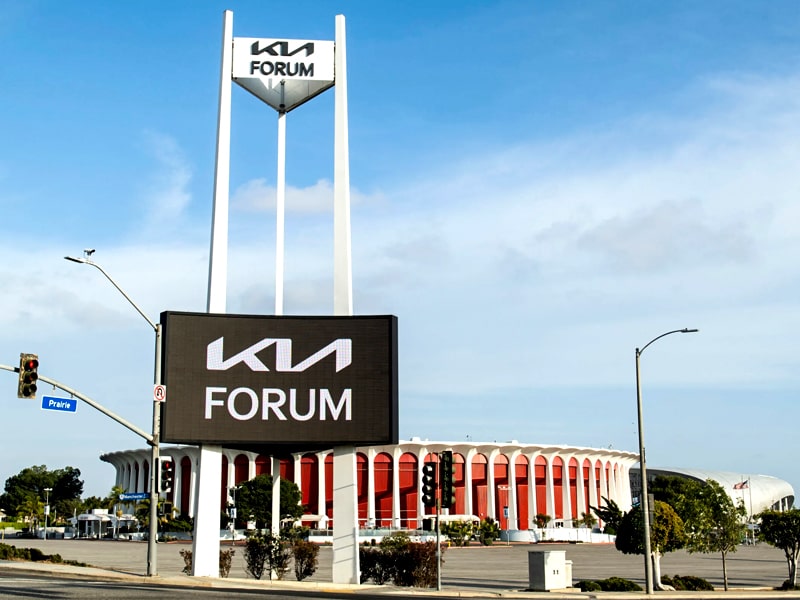 In the past, the stalwart entertainment venue on the corner of Manchester and Prairie in Inglewood, California, US, has been known as the ‘Fabulous Forum’ and the Great Western Forum and, well, just The Forum. But now, thanks to a deal with the South Korean automaker’s Southern-California wing, Kia America, as of April 4th, 2022, it’s The Kia Forum.

The ‘Daily Breeze’ stated that Kia America formally announced that it purchased the naming rights for the arena from Forum owner Steve Ballmer – the first US naming rights deal for the automaker – with a ceremony at the familiar venue, which has been packing in crowds on since 1967.

The 17,505-capacity The Kia Forum, located in Inglewood, California, US, is the only arena-sized venue in the country dedicated to music and entertainment, delivering a superior experience for artistes and fans alike. It is a multipurpose indoor arena adjacent to Los Angeles. Located between West Manchester Boulevard, across Pincay Drive and Kareem Court, it sits North of the 70,000-capacity SoFi Stadium and the Hollywood Park Casino, about three miles East of the Los Angeles International Airport.

The ‘Daily Breeze’ further stated that the announcement wasn’t much of a surprise, however, as the new signage out in front of the stadium bearing the Kia logo had been visible for quite sometime. The arena’s website switched on the new name on April 4th.

Noted Russell Wager, Vice-President of Marketing for Kia America, “Kia America is proud of our history in Southern California going back to the establishment of our US headquarters here in 1992, and so we all celebrate now being part of one of the most historic, and emotionally-connected live entertainment and sports venues in California – if not the world. We are thrilled to be a part of the entertainment and excitement of live music and events at the Kia Forum moving forward.”

Kia America is based in Irvine, California. Kia Corporation’s international headquarters are in Seoul, South Korea.

Financial details of the naming deal were not released on April 4th.

Its towering arches and 60-foot columns inspired by the Roman Forum, the arena was once the inspiration for Inglewood’s ‘City of Champions’ moniker when the National Basketball Association (NBA) team Los Angeles Lakers called it home. The Lakers have since moved on and the hall has been reinvigorated in recent years as a concert and entertainment venue.

Asserted Geni Lincoln, General Manager and Senior Vice-President of Live Events for the Forum, “We’re proud to partner with Kia and weave together our history with an innovative future, while continuing our dedication to the SoCal community. We look forward to merging the entertainment and automotive industries, broadening our mutual commitments to diversity, sustainability and creativity.”

Kia, founded in May 1944, was Korea’s first automaker. The Hyundai-Kia Automotive Group, with a growing international footprint, is currently the world’s fifth-largest vehicle manufacturer.

Kia officials hope the marketing deal helps boost its efforts to boost the profile of its electric vehicle, the EV6. Along with the new signage, the automaker will install EV charging stations and EV6 vehicle displays at the Forum.

Steve Ballmer, former Microsoft CEO and current owner of the NBA’s Los Angeles Clippers, purchased the Forum for $400 million two years ago, ostensibly to resolve a legal battle launched by previous owner Madison Square Garden Co. over his plans to build a new arena for his Clippers just blocks away. MSG officials claimed the project violated its agreements with the City of Inglewood by placing a competing venue in the area.

The Forum is just the latest Southern California venue to get a new name. Late last year, the 20,000-capacity Staples Center in Los Angeles, California, was rechristened after Crypto.com secured naming rights to the current home of the Lakers, NBA teams Los Angeles Clippers and Sacramento Kings in November 2021. The Clippers will depart that hall when Ballmer’s 18,000-capacity Intuit Dome opens down the street from the Forum in 2024.

The Forum, once home to the Lakers and Kings, is now primarily a music venue. Former Lakers and Kings owner Jack Kent Cooke commissioned the arena, designed by architect Charles Luckman, at a cost of a then-hefty $16 million.

It was once one of the most recognized sports arenas in the nation and became identified with the Lakers during their dynasty days.

Hall of Fame announcer Chick Hearn called the hall ‘the Fabulous Form’ and the nickname stuck with fans.

The Lakers won the 1982, 1987 and 1988 championships at the Forum. The arena also played host to Games 3 and 4 of the 1993 Stanley Cup Finals pitting the Kings against the Montreal Canadiens, the only time the National Hockey League championship series was held there.

The Forum figures prominently in the current HBO series ‘Winning Time: The Rise of the Lakers Dynasty’, which tells the story of the team’s championship heyday. John C. Reilly stars as the Late Dr. Jerry Buss, who turned his collection of cobbled-together real estate acquisitions into one of world’s most valuable sports franchises.

The arena, which fell off the pace of other major sports venues because of its size and lack of corporate-level luxury boxes, lost the Lakers and Kings to the new Staples Center in 1999. The arena struggled in the years that followed.

But the Madison Square Garden Company acquired the arena in 2011, and promptly announced plans for a $50 million facelift. The aging hall was reborn, with new lighting, seats, video screens, and acoustics. Since then, the Forum has primarily hosted major musical acts and touring shows (as well as the occasional sports event, including boxing and mixed martial arts bouts).

The Forum’s parking lot also served as a mega-testing center during the height of the coronavirus pandemic.