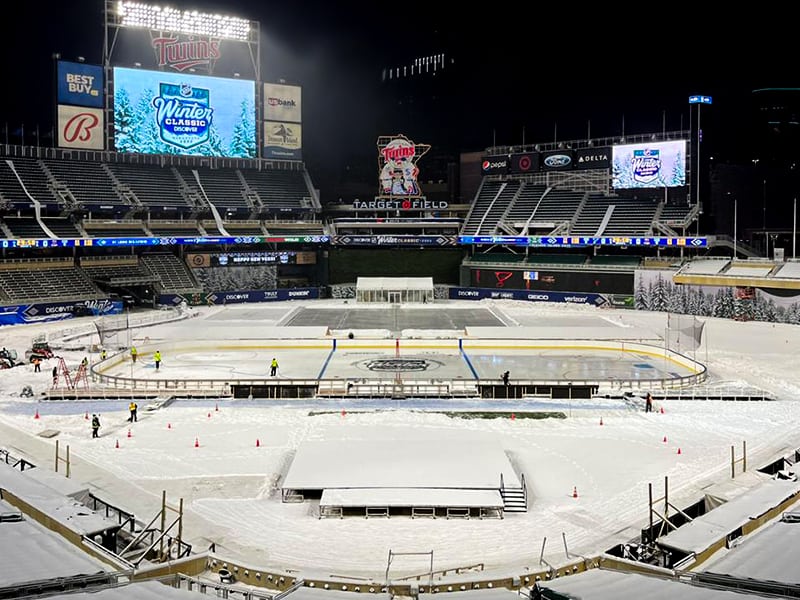 Brrr!!! Maybe playing hockey indoors isn’t such a bad idea after all.

The ‘FOX NEWS’ stated that the Target Field in Minneapolis (US) set the record for the coldest game in the National Hockey League (NHL) history when it hosted the league’s annual Winter Classic on the night of January 1st, 2022.

The game between the NHL teams Minnesota Wild and St. Louis Blues ended in a 6-4 win for St. Louis.

The 39,504-capacity Target Field is a baseball park in the historic warehouse district of downtown Minneapolis (US). It is the home ballpark of the Minnesota Twins, the State’s Major League Baseball (MLB) franchise. It is named after the Minneapolis-based retailer Target Corporation. It was home of the MLB All-Star game in 2014.

The ‘FOX NEWS’ further stated that when the puck dropped at 6:20 pm were around minus-7 degrees, with the wind chill estimated to be around minus-18 degrees.

By 8:30 pm., temperatures at the stadium – which is normally used by MLB’s Minnesota Twins for baseball in the Spring and Summer – were around minus-9 degrees.

Previously, the coldest outdoor NHL game was played between the Edmonton Oilers and Montreal Canadiens in Edmonton (Canada), according to the league.

Because of the cold weather, some 40,000 hand-warmers were available to be distributed at the game and concession stands offered soup, according to the NHL.

Even in sub-zero weather conditions, the ice still has to be heated, according to the league.

Said Mike Craig, the NHL’s Senior Manager of Facilities Operations, “Once we get too cold, we can have some issues with it being brittle or skate marks where it does chip away, so we really try to control that temperature.”

Since conditions were so cold, heat was transferred to the ice from a mobile refrigeration unit.

The NHL, however, didn’t expect the cold weather to discourage fans from attending the game.

Remarked NHL Chief Content Officer Steve Mayer, “We had a lot of people here in Minnesota who told us also how tough a Minnesota fan is, and that was certainly a factor in coming here.”

« Previous News: Initial design plans for AGF Aarhus venue
» Next News: ‘Prime Time’ is the name of the game