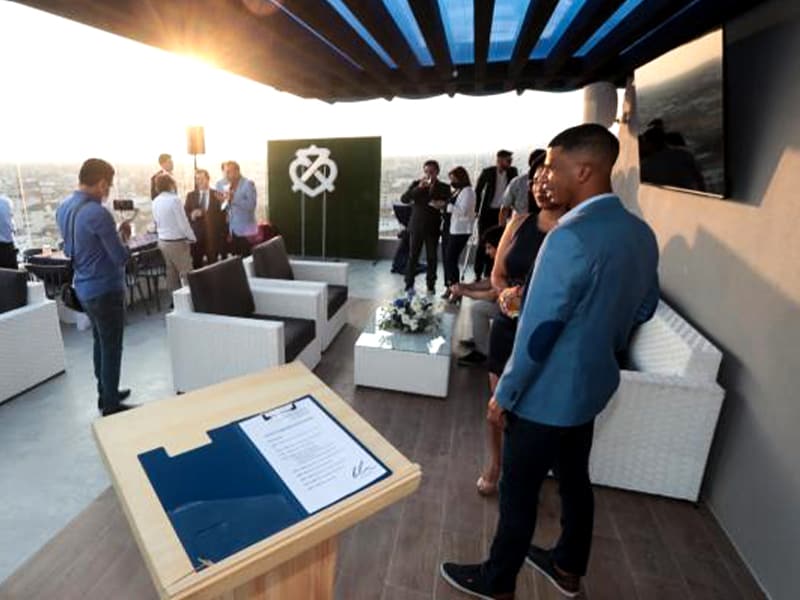 The ‘El Universo’ stated that ‘Blu’ enjoys four levels in the tower located at the intersection of Quito Avenue and San Martín Street at Guayaquil in Ecuador. The first three levels are mezzanine floors and the last a terrace. The terrace is the main high point of the restaurant and provides a panoramic view of the City of Guayaquil.

The George Capwell Stadium is a multipurpose stadium in Guayaquil, Ecuador. It is currently used mostly for football matches and is the home stadium of Emelec. It was announced right after Emelec won the 2013 Ecuador Serie A title that Stadium George Capwell would be completely remodeled to hold 40,000 fans. The remodeling began in June 2014 and ended in December 2016.

The ‘El Universo’ quoted Pío Montúfar as asserting, “The George Capwell Stadium is one among the few football stadia in the world to boast a rooftop restaurant. This is one of the reasons that we decided to invest in the restaurant. ‘Blu’ will facilitate people to come and let their hair down and it will also attract tourists.”

The ‘Blu’ construction work began in 2019 and though it was slated to be completed in June 2020, but COVID-19 threw its long shadow on the project and finally the eatery opened its doors to tickle people’s taste buds on November 8th, 2021.

The price tag of the rooftop restaurant is circa one million dollars. It will offer gourmet food and leave foodies spoilt for choice and those who love to frequent the watering hole – it will have the choicest of cocktails on offer. Topmost priority will be given to food quality.

Informed Gastón Pogoda, Project Operator and Investment Partner, at the inaugural ceremony, “Our menu will comprise unique dishes and food quality will be maintained.”

There is a parking spot devoted solely to gastronomes that come to the restaurant and cars perched will be under the watchful eyes of the security guards.

Ivonne Tufiño, Marketing Manager of the club, believes that with ‘Blu’ now being brought on stream, more people will start flowing into the stadium because the venue operators also organize stadium tours for the visitors and the rooftop restaurant will now act as an added attraction for the guests.

Tufiño also explained that the objective behind opening the rooftop restaurant is to portray the arena as “a multipurpose venue which has more to offer beyond sports”, and tourists and fans will not just visit the stadium to watch football but also to soothe their frayed nerves and enjoy mouthwatering food at the rooftop restaurant while soaking in the beautiful views of the City.

‘Blu’ will be open even when a match is not being held in the facility to provide fans a more exhilarating experience and eat and drink to their hearts’ delight.

Added Neme, “The rooftop restaurant will be a focal point of attraction not only for the fans and the tourists but also for the general public of Guayaquil.”

Gourmands will also be able to enjoy a view of the Emelec’s playing field apart from the City of Guayaquil while digging into their favorite bowl of food.

The rooftop restaurant is located in one of the new towers of George Capwell Stadium, which was last expanded and remodeled in February 2017.