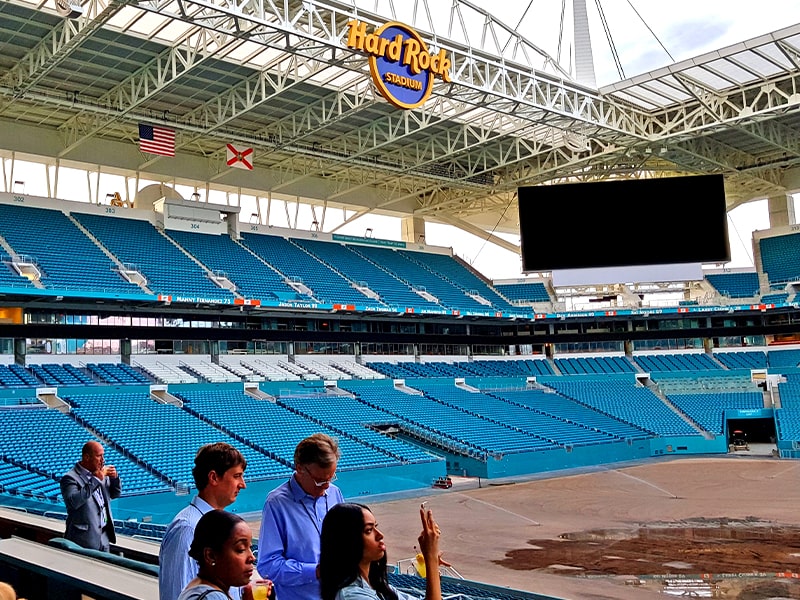 US President Donald Trump announced on Thursday a plan to reopen the economy, including guidelines for public assembly facilities, after weeks of closures aimed at arresting the coronavirus pandemic which has taken the country by storm.

The federal guidelines are nonbinding and put decision-making in the hands of States and their respective Governors.

The Trump administration’s ‘Opening Up America Again’ plan calls for a phased reopening of businesses based on benchmarks, dubbed gating criteria, that must first be met.

Trump stated, “In terms of sports, they’ll probably start off — as you know I spoke to the Commissioners yesterday of almost, I guess of every sport — and many of them are going to be starting without the fans. So, it will be made for television. The good old days. Made for television and it’ll go that way and then fans will start coming in.”

The benchmarks require a series of downward trajectories, reported within 14-day periods, of influenza and COVID-like illnesses as well as documented COVID-19 cases and positive tests as a percentage of total tests administered.

The phases lays down guidelines to be implemented by States and facilitates places such as movie theaters and sports venues “to operate under strict physical distancing protocols,” including six feet of separation.

Phase One call for gatherings of no more than 10 people when such distancing is not possible.

Phase Two calls for employers in States and regions with no evidence of a rebound in coronavirus cases to continue operating with strict distancing measures but with expanded gatherings allowed.

“Social settings of more than 50 people, where appropriate distancing may not be practical, should be avoided unless precautionary measures are observed,” the guidelines say.

Phase One also lays down that employer should minimize nonessential travel, while Phase Two calls for its resumption.

Phase One and Two call for vulnerable individuals — defined as the elderly or those who have “serious underlying health conditions, including high blood pressure, chronic lung disease, diabetes, obesity, asthma and those whose immune system is compromised such as by chemotherapy for cancer and other conditions requiring such therapy” — to continue to shelter in place.

Phase Three allows for vulnerable individuals to resume public interactions, but with “physical distancing, minimizing exposure to social settings where distancing may not be practical, unless precautionary measures are observed.”

All phases of the guidelines seek employers to develop plans for social distancing; use of protective equipment; administration of body temperature checks; testing, isolating and contact tracing; and sanitation and disinfection of high-traffic workplace areas.

“We are not opening all at once, but one careful step at a time, and some States will be able to open up sooner than others,” Trump further stated.

States will be allowed to remain closed if they think the situation warrants so, he said – “Governors will be empowered to tailor an approach that meets the diverse circumstances of their own States. Every State is different.”

Dr Anthony Fauci, Director of the National Institute of Allergy and Infectious Diseases, stressed that the health and safety of the American people was the No. 1 factor taken into consideration while formulating the guidelines.

“A light switch on and off is the exact opposite of what you see here, which is a gradual gradation,” Dr Fauci remarked.

The thrust is that the gating criteria must be satisfied, with no rebound of outbreak. Before Phase One can begin and again before moving into each subsequent phase, making for “multiple checkpoints of safety”, Fauci stressed.

“We are a very large country and we have different dynamics in the country,” We have areas of the country that have gone through a terrible ordeal and others that fortunately have … gotten through this rather lightly,” he added.

Dr Fauci said that it is “conceivable” that the third phase would see the return of packed to capacity arenas for sporting events, large crowds and concerts. However, he added that “any rebound in infections would likely require a reimposition of mitigation efforts”.

Dr Fauci concluded by saying, “There may be some setbacks. Let’s face it. This is uncharted water.”