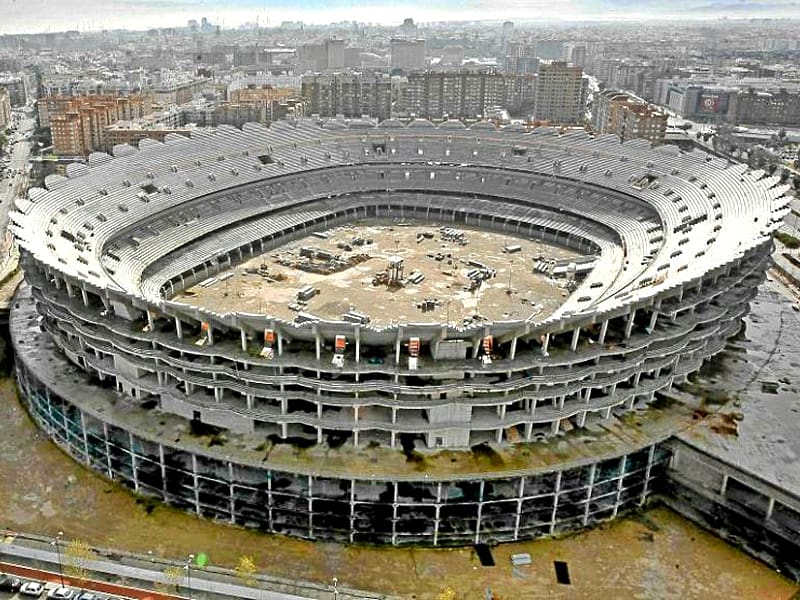 The Spanish professional football club Valencia CF (Spain) held a working meeting with the Ayuntamiento de Valencia City Council on January 18th, 2022 to explain all the details regarding the construction of the club’s new stadium work on which got halted due to pecuniary reasons.

Mestalla Stadium is a football stadium in Valencia, Spain. The stadium is the home of Valencia Club de Fútbol and has a capacity of 48,600 seats, making it the eighth-largest stadium in Spain, and the largest in the Valencian community. The North Stand of the stadium is known for its very steep section.

Nou Mestalla is a partially built 54,000-seat football stadium in Valencia, Spain, intended as a replacement for Valencia CF’s current stadium, Mestalla Stadium. The basic concrete structure of the stadium was built between August 2007 and February 2009, but work was then halted for financial reasons. The design was revised in 2013 with a reduced capacity.

The ‘Valencia CF’ further stated that the meeting arrived at a decision to continue with the stadium project and involving a municipal body in the entire exercise. Earlier, the club held a meeting in December 2021 with the Generalitat Valenciana and following that meeting, the club has held meetings with several strategic institutions to find ways and means to continue with the above development.

Stated Murthy, “The meeting ended on a positive note. After the two meetings with the Generalitat, we arrived at a strategic decision to formally present the project to the City Council. We want to wrap up the project at the earliest as it holds a lot of significance for the City of Valencia. It is a project which will prove to be a windfall for the City.”

Added Murthy, “Work will resume on the stadium project at the earliest and we have reached a decision with Mayor Ribó in this regard. After presenting the project to the Generalitat and the City Council, we are working out the formalities. The new home of Valencia CF will help lure investors to the City.”