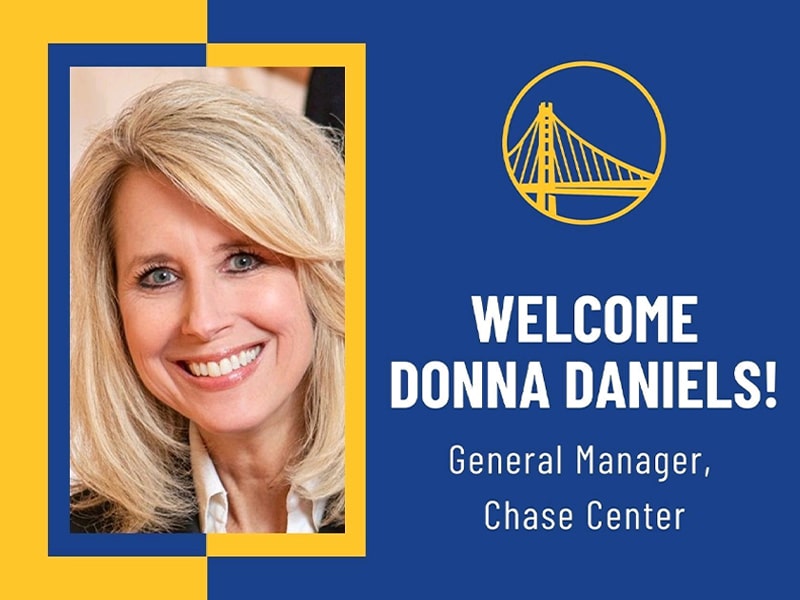 The ‘Chase Center’ stated that the above announcement was made on May 26th.

The Golden State Warriors are an American professional basketball team based in San Francisco, US. The Warriors compete in the National Basketball Association (NBA) as a member of the league’s Western Conference Pacific Division.

The 18,064-capacity Chase Center is an indoor arena in the Mission Bay neighborhood of San Francisco, California (US). The building is the home venue for the Golden State Warriors of the National Basketball Association and occasionally for San Francisco Dons men’s basketball.

The ‘Chase Center’ further stated that Daniels, who has over 30 years of experience in professional sports and live entertainment -including 25 years at the NBA league office – will oversee all Chase Center operations. Daniels will report to the Warriors President and Chief Operating Officer (COO), Brandon Schneider.

Said Schneider, “Donna is held in extremely high regard in our industry and brings extensive and valuable operations experience to San Francisco. As we continue to solidify Chase Center and Thrive City as a global destination for fans and tours alike, Donna’s vision, leadership and perspectives will elevate the Chase Center experience for everyone visiting the venue. As an established executive in the NBA, we are thrilled to welcome Donna to our leadership team.”

Daniels joins the Warriors and Chase Center from Harris Blitzer Sports & Entertainment, where she served as the Executive Vice-President and General Manager of the 19,500-capacity Prudential Center in Newark, New Jersey (US) from 2019 through 2021. In that role, she led all Prudential Center operations, including management of the Grammy Museum Experience at the Prudential Center.

From 2016 through 2019, Daniels served as the Harris Blitzer Sports & Entertainment Senior Vice- President of Business Operations, where she oversaw operational efficiencies related to all business operations efforts.

Enthused Daniels, “I am thrilled to join Chase Center and the Warriors’ organization. The vision that Joe Lacob, Peter Guber and the Warriors ownership team has articulated for the arena and the surrounding Thrive City, is extraordinary. Chase Center is an incredible venue, one that has established itself as a premier destination for fans to experience world class live entertainment in many forms, a nod to the talented group of team members at the company. I am honored to lead the venue, and look forward to meeting Warriors fans, concert attendees and the community members that make up the fabric of San Francisco.”

Prior to her time at the Harris Blitzer Sports & Entertainment, Daniels held various roles at the NBA. Most recently, Daniels served as Vice- President, Team Marketing and Business Operations (TMBO) from 2011 through 2016. Her span at the NBA also included stops as Vice-President of Strategic Initiatives (2008-2011), Vice-President, TMBO (2004-2008), Vice- President, Team Sponsorship Development (2002-2004), Vice-President, D-League Marketing (2002), and in 2001, was named Team President of the Roanoke Dazzle, launching one of the then-NBA D-League’s inaugural teams, where she oversaw all business operations.

In 2019, Crain’s New York named Daniels to their Notable Women in Sports Business list and she was named a 2020 VenuesNow Women of Influence. In 2021, ROI New Jersey named Daniels a Woman in Sports Business Influencer, and Cynopsis Women in Media named her to their annual Operations Front Runners list. A native of the East Coast, Daniels graduated with her Bachelors of Arts from Hobart and Williams Colleges.