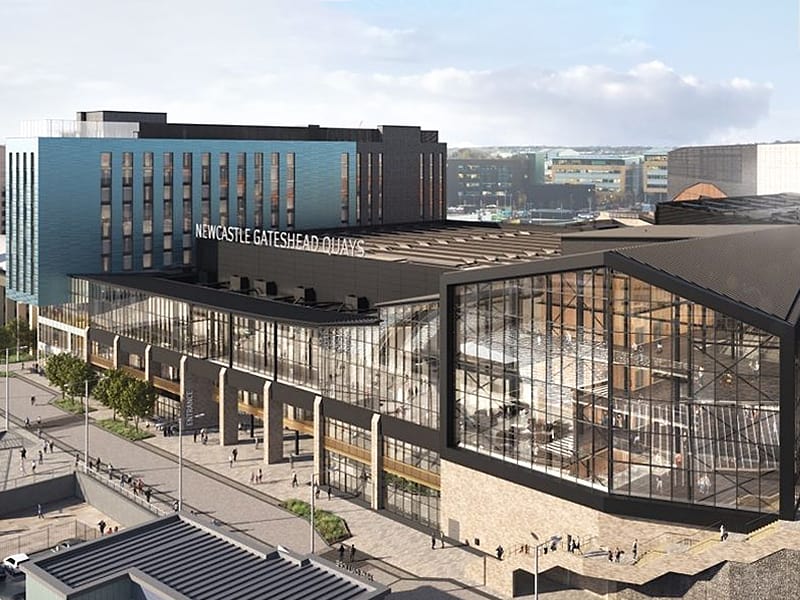 A major hotel development on the Gateshead Quayside in Newcastle upon Tyne (UK) that neighbors feared would leave them living in darkness is set to be relocated in a bid to cut costs, it has emerged.

‘ChronicleLive’ stated that earlier this year residents of the Baltic Quays apartments held major worries about an 11-story hotel, planned as part of the visions for a new Quayside arena and conference center, looming over their homes. It was claimed in March that the dual-branded Novotel (French midscale hotel brand) and Ibis (French brand of economy hotels) would leave the flats next door feeling “like a Victorian prison”.

The £260m Gateshead Quays (UK) development, which will encompass a 12,500-capacity arena to be run by ASM Global – a venue and event management company based in Los Angeles, United States, specializing in managing stadiums, convention centers, theaters, and unique venues.

The Quayside is an area along the banks (quay) of the River Tyne in Newcastle upon Tyne (the North Bank) and Gateshead (South Bank) in the North East of England, United Kingdom.

But, in a surprise announcement made recently, the developers behind the £300m riverside complex unveiled proposals to relocate the controversial hotel to a new site behind the proposed arena – and build a park where it was originally meant to be. The news comes amid uncertainty over the future of the arena development, to be known as The Sage, with the Gateshead Council having asked the Government for £20m of Levelling Up Funding to help cover escalating building costs.

The Levelling Up Fund provides a unique opportunity to improve the collective understanding of what types of interventions work well in addressing leveling up challenges, through programs, individual projects and across varying spatial scales.

‘ChronicleLive’ further stated that the local authority bosses said the reworked proposals would be “more cost-efficient” as they grapple with the economic fallout of COVID-19 and the war in Ukraine. Developers Ask Real Estate and PATRIZIA UK added that the changes were being made due to “operational and constructional reasons”, rather than in reaction to local residents’ complaints, as they announced the launch of a public consultation on revised plans to instead build a nine-story hotel on vacant land at the corner of Hawks Road (Kingston upon Thames, UK) and Quarryfield Road (Gateshead, UK).

Relieved neighbor Peter Bauckman, who has lived at the Baltic Quays since 2003 and is a Director of the building’s management company, said the redesign was “really, really good news”. Of the proposal to instead build a public park on land the hotel had been earmarked for, he added, “That is what it always should have been used for”.

After the Gateshead Council granted approval for a larger version of the hotel in March this year, campaigners had pleaded for it to be redesigned to protect its neighbors.

The developers say they intend to submit a new planning application for the relocated hotel by the end of the year, with a public consultation running until November 16th. They said that the new hotel, next to a 1,000 space multistory car park under construction for the Gateshead Council, would be nine stories tall and contain 344 bedrooms, adding that the new park would bring “valuable green space into the area and enhance biodiversity”.

It has been suggested since this Summer that, if the Council is unable to secure new funding for the arena and conference center, the huge plans would have to be redesigned and scaled back. However, the local authority bosses have repeatedly insisted to the Local Democracy Reporting Service that the major riverside attraction will be built, following concerns that spiraling inflation could put it at risk.

It will feature a 12,500-capacity arena that will replace the 11,000-capacity Utilita Arena in Newcastle upon Tyne, England, a conference center, plus new bars, restaurants, public space and walkways along the Quayside with Sage PLC (British software company based in North Tyneside) having bought the naming rights for the new complex, the existing Sage Gateshead music center next door is due to be renamed.

A Gateshead Council spokesperson said, “The project, like other major schemes, has not been isolated from international crises including COVID-19 and escalating construction costs as a result of the war in Ukraine. The design team has been conducting a full review of the project costs to realize cost efficiencies. The design review has led to the proposed relocation of the two hotels currently on the site, to currently vacant land within the Baltic Quarter. This new design is more cost-efficient but also improves the original by introducing a new park adjacent to the conference and exhibition center, for the benefit of both residents and visitors to enjoy. The combination of the green space and the campus being heated by heat from the local mine water will aid the Gateshead Council aim of achieving its net zero target.”

The Local Democracy Reporting Service (LDRS) is an initiative in the United Kingdom funded by the British Broadcasting Corporation (BBC). The scheme pays for the employment of journalists by local independent news outlets, in order to improve the coverage of issues relating to the local democracy.