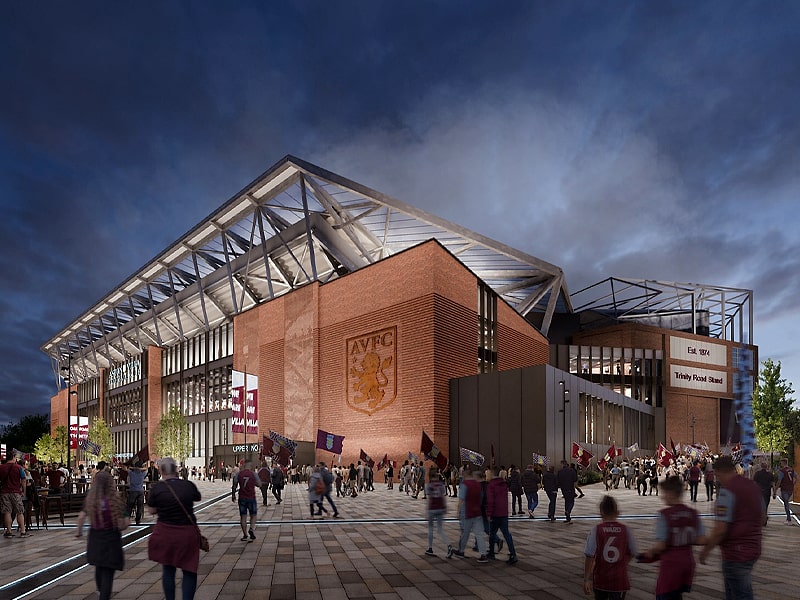 The Premier League team Aston Villa F.C. (UK) has released a host of new computer-generated imagery (CGI) images to illustrate their vision for the future of their home ground – Villa Park.

‘Aston Villa FC’ stated that this comes as the club announces that they will submit a planning application for the redevelopment and expansion of the stadium at the end of August 2022.

The Villa Park is a football stadium in Aston, Birmingham, England (UK), with a seating capacity of 42,682. It has been the home of the Premier League side Aston Villa F.C. since 1897.

‘Aston Villa FC’ further stated that the plans will pave the way to create a world-class sporting venue, enabling the club to compete at the very highest level, with an increased stadium capacity of over 50,000.

The move follows a public pre-planning application consultation that ran throughout June and July, in which nearly 10,000 residents and businesses, stakeholders and fans had their say on the plans.

Aston Villa head honcho Christian Purslow said, “Following a successful consultation period, we are pleased to announce that we will be submitting our proposals for the redevelopment and expansion of the Villa Park at the end of the month. We have received a hugely positive response from the local community, our supporters and other stakeholders and are confident that this project will transform both the stadium and the local area.”

Added Purslow, “These new CGI images showcase our spectacular vision for Villa Park which includes a brand-new commercial destination, Villa Live, and high-quality public space for the community. We look forward to continuing to work with all partners to realize our future vision.”

The Villa Park is home to a rich heritage and unique atmosphere that Aston Villa F.C. wants to celebrate, expand and enhance.

The top-flight club not only wants to redevelop Villa Park for the benefits of their fans and players but to make a difference beyond the grounds of the stadium. To this end, they are developing a wider masterplan for Aston in collaboration with the Birmingham City Council and the West Midlands Combined Authority.

The club has developed a set of aspirations that demonstrate their vision for the future of Villa Park, to help focus their plans on what is important to the club, fans and the local community, and will underpin everything that they do.

The Premier League club is proposing to increase the spectator capacity to over 50,000 and modernize the stadium to create a world-class sporting venue that can satisfy the growing demand and enable them to compete at the very highest level. The plans also set out their commitment to the local community, creating a destination that can be enjoyed all-year round.

The ambitious plan to support the regeneration of the area will begin with an £100m+ investment in the first phase of improvements to the Villa Park, with works estimated to take place in late 2023 and construction completion toward the end of 2025.

The key areas of Phase One involves: