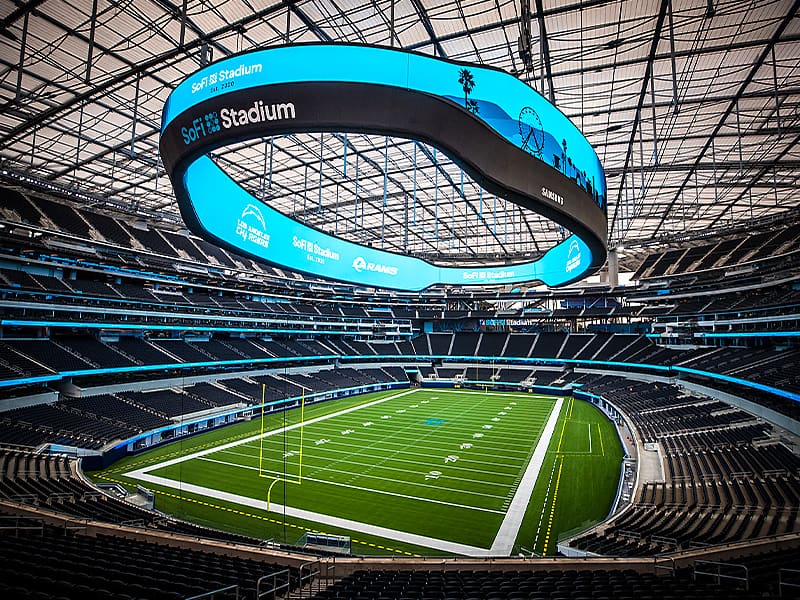 The wait was finally over for visitors who wanted to take a look inside Inglewood’s (US) pride – the oh-so-alluring SoFi Stadium!

‘abc7’ stated that the operators of the stunning SoFi Stadium launched its new tour program on May 22nd and the public got to savor an immersive, behind-the-scenes experience of the scintillating stadium.

The 70,000-capacity SoFi Stadium is a stadium and entertainment complex in Inglewood, California, United States. It is located at the former site of the Hollywood Park Racetrack 3 miles from LAX Airport, immediately Southeast of The Forum. It is the home of the Los Angeles Chargers and the Los Angeles Rams.

The Los Angeles Chargers are a professional American football team based in the Los Angeles metropolitan area (US). The Chargers compete in the National Football League (NFL) as a member club of the League’s American Football Conference West division.

‘abc7’ quoted Jason Gannon, Managing Director, SoFi Stadium, as stating, “This is the largest venue in the National Football League (NFL) at over 3.1 million square feet. It’s absolutely spectacular, stunning and the tours program gives folks an opportunity to come here and experience that.”

During the tour, guests also got a complete knowhow as regards the creation of the stadium, they could run through the tunnel, check out VIP sections, and player locker rooms. They were even able to test their football skills on the field with some on-field challenges and compare them to the professionals.

Commented Chris McConnaughey, General Manager, Hospitality for Legends, “Fans alike, want to experience what it’s like to make it to the big time. Before you come out here on the field, you take the tunnel, we call it the tunnel run. When you get out here and you start running around, I would say that the inner child in you starts to come out.”

Stadium executives stated that people who are passionate about stadia or if one is a Rams or Chargers fan, the tour is for them. The stadium executives were all agog over the fact that they were able to finally greet fans into the SoFi Stadium fold as the United States is making a progress for the better as far as the COVID thwack is concerned. They are also excited to be in the Inglewood community which is why they are offering Inglewood residents discounted prices on tour tickets.

Stated Gannon before the start of the tour, “Can’t wait to have folks in and around Hollywood Park in the Inglewood community to come in and see what’s right next door.”

The tour concluded in the stadium’s team store – The Equipment Room – which will also be open to the public and won’t require a reservation.

Tour tickets ranged from about $30 to $50 depending on the package.

From the SoFi Stadium stable

The ‘SoFi Stadium’ stated that it was ‘say cheese!’ moment for fans as they could experience SoFi Stadium with a VR photo opportunity and download the Hollywood Park and SoFi Stadium Mobile Apps for even more behind-the-scenes access.

Once the visitors descend in the stadium, they simply cannot miss out on the impressive private suites, take in the luxuries of the premium guest experience with the unhindered views, premier catering, and the luxurious décor, which in some suites includes a chandelier. Imagine the gameday or event day atmosphere from a unique vantage point and relish the squeal-and-thrill moments.

Guests can feel like a pro as they are given the opportunity during the stadium tour to run through the 60-foot tunnel room to hype them up before they enter onto the SoFi Stadium field. Once on the turf, they will be able visit locker rooms, compete in the on-field challenges and experience a post-game interview.

Once inside the spiffy stadium, guests can experience a tunnel runout and show off their skills as pro, kicking field goals, throwing at targets, running the ‘40’ and testing their high jump.

Toast to the stadium

While winding up the stadium tour, there’s no better way to commemorate a trip to SoFi Stadium than through the official team shop, where one can find the pick of stadium-exclusive merchandise and gear.

The ‘SoFi Stadium’ further stated that the public as well as the football fiends can book their tickets for that unique and immersive SoFi Stadium tour!

All the above category tickets are now available for purchase.