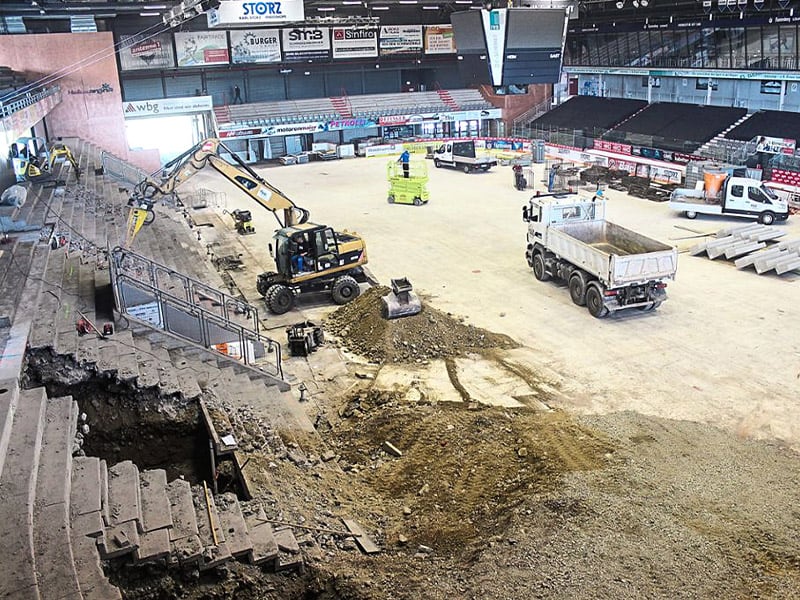 Helios Arena in Germany – home ground of the professional ice hockey team Schwenninger Wild Wings – is being rebuilt. A new grandstand is coming up to replace the standing room. As per the plan, the construction work should be completed by the end of August this year at the latest.

Helios Arena is a facility which sits in Villingen-Schwenningen, Germany. It is primarily utilized for ice hockey, and holds 6,215 spectators.

In the construction site, work is on in full swing despite the coronavirus situation. The architect Uwe Schlenker, and Wild Wings Managing Director Christoph Sandner are engaged monitoring work in the construction site. Architect Schlenker explained that new foundations are being laid for the new grandstand.

Since it will be modified into an all-seater arena from standing, the capacity of the stadium will get reduced from 6,200 seats to 5,300 seats. VIP space and sponsor boxes will come up in the upper tier. The second level of the facility will be accessible to wheelchair users in the future.

Schlenker further informed that the facility should be ready by August as “From our side, we have been on schedule so far.”

“Our goal is to be ready by the end of August at the latest,” says Klaus Hässler, Managing Director of Kunsteisbahn-Gesellschaft (KEB). KEB Technical Director Hermann Vikoler informed that ice will be made for the rink in mid-July.

“Nobody knows when the season will actually start due to COVID-19. But we have to be ready when the time comes,” stated Hässler.

The ice surface will also be reduced while construction work is on. Says Sandner, “The atmosphere in the arena will be an electrifying one as the seats will be much closer to the ice where all the action lies.”

According to Schlenker and Sandner, the costs are “flexible”. The reason behind it is that the whole remodeling work is a project of Wild Wings GmbH and not of the city of Villingen-Schwenningen. “We currently assume that we can even expand two to three boxes this year. There is space for a maximum of five,” maintained Schlenker.

Sandner stated that whether fans will be able to come to the arena once it is up and running still remains a question mark due to the fatal respiratory disease which has caused a huge health crisis. The groundbreaking ceremony did not take place as fans were not in a position to participate.