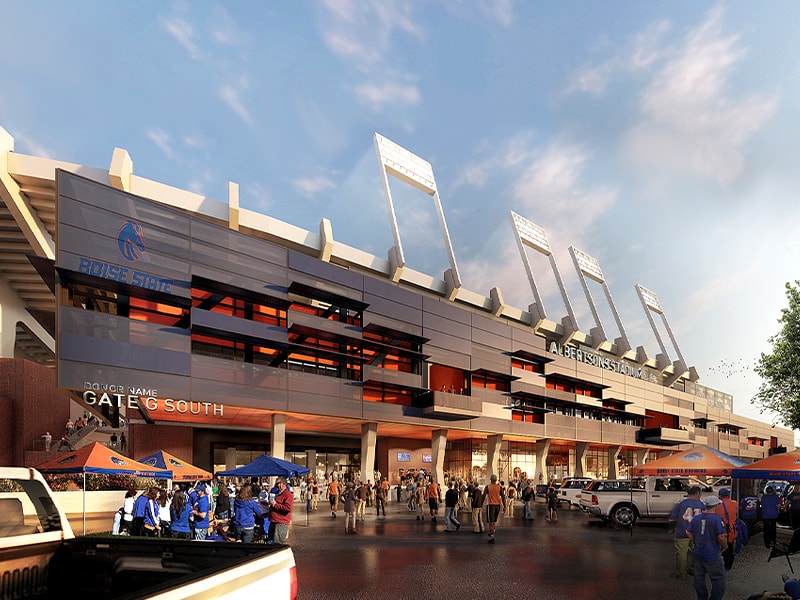 Albertsons Stadium – the outdoor athletic stadium in Western United States – will soon wear a chic look due to proposed renovations. This is as per information given by Boise State University authorities. A complete remodeling of the east side of the facility is planned in the near future.

The development will include sprucing up the exterior of the venue, an expanded Academic Center, and a home solely for BroncoLIFE. In 2002, the Boise State University Athletics Department introduced the BroncoLIFE program encouraging student-athletes to dedicate themselves to Lives Invested for Excellence.

The other development plans include added seating, expanded concourses, and upgraded amenities. The upgrades include individual club seats, four-person loge boxes and a climate-controlled indoor space with supporters spoilt for choice with food and beverage options.

Boise State University students are excited over the whole revamp plan as it will include food options to tickle their taste buds.

Exulted one of the students Nicolas Gutierrez, “Food too, because the lines are like, 30 to 40 minutes. You miss like a whole quarter just trying to get some snacks. I think that’d be great to get more food in there.”

BSU will not know how much the entire development will cost until the renovation proposal gets a go-ahead and is put to bid.

Private fundraising and proceeds from ticket sales from new premium seats will be used to fund the project. A timeline will be set for the project after the university authorities figure out when they will be in a position to fund the same. Once the funding plan is finalized, they will begin the approval process with school leadership and the State Board of Education.

Says alumni Blu Kboy as to who would benefit most from the proposed changes – “The school, actually. They could sell all those boxes and the club seats down at the bottom. Get more interest in actually filling up again.”

Boise State Athletics is confident of moving ahead with the project. They say the overhaul plans would not affect 2020 season ticket holders.

Boise State University authorities have asserted that the project will touch every aspect of Bronco Athletics.

Officials said that the need of the hour is to modernize the east side of Albertsons Stadium. The project will facilitate the university authorities to address a need for more student-athlete academic space.

The cost projection for the project is still not known. Season ticket holders in the lower bowl of the east side will be impacted and some parking on the east side of Albertsons Stadium will likely be lost as a result of the construction.

The renovation work will be broad in scope. “It is a rare opportunity to take on a project that will impact every student-athlete in our department and our fans. That’s what is so special about the East Side Renovation. This project benefits everybody,” remarked Boise State Director of Athletics Curt Apsey.

The renovation work will make available new seating options on the east side and include a redesigned lower bowl and premium seating. Those displaced will have priority in the reconfigured lower bowl based on their priority rank. Rest of the season ticket holders will be able to choose new seats during the improvisation process.

Once the project is through, two different seating options will be made available:

“Our mentality is about being in a constant state of improving and getting better. That’s the entire ‘Attack The Future’ push that defines our program,” opined Boise State football head coach Bryan Harsin.

“Enhancing the east side of Albertsons Stadium with additional premium seating, upgraded fan amenities and experience options and developing an area that will benefit our student-athletes academically, nutritionally and in life skills and career development is absolutely vital to the success of our program. This project is a game changer for Bronco football on so many levels,” stated Harsin.

Albertsons Stadium went on stream in September 1970 and can presently fit in around 36,387 supporters. It is reported that the stadium plan comes amid thin attendance of spectators and fall in ticket revenue at the arena.