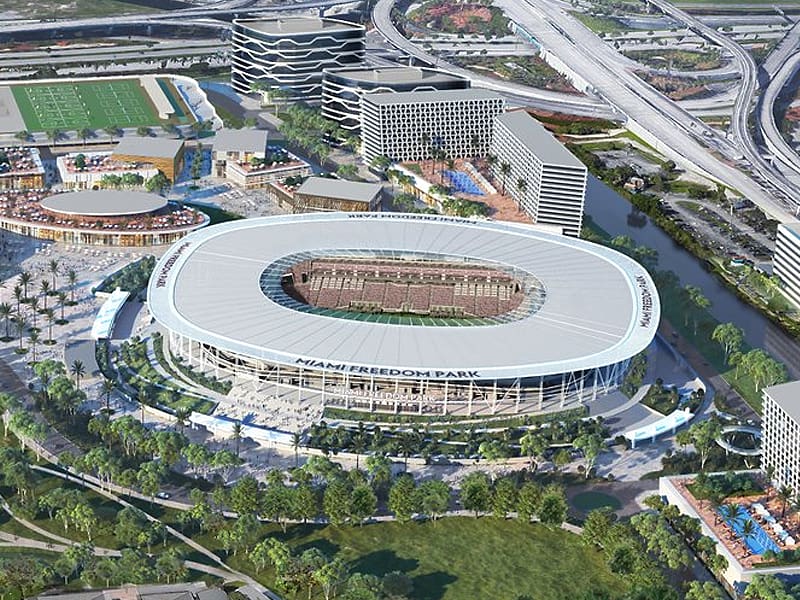 The ‘Miami Herald’ stated that nearly a decade after he retired and set his sights on launching an MLS team in Miami, Beckham and partners Jorge and Jose Mas have been awarded a 99-year lease to develop the Miami Freedom Park plan, which would transform the Melreese golf course into a complex that would include a 40,000-seat stadium, hotel, retail shops, a parking structure with rooftop playing fields, and a 58-acre park.

The Inter Miami CF or simply Inter Miami is an American professional soccer club based in the Miami (US) metropolitan area. Founded in 2018, the club began play in Major League Soccer (MLS) in the 2020 season.

The DRV PNK Stadium is a soccer-specific stadium in Fort Lauderdale, Florida (US). Built on the site of the former Lockhart Stadium, the 18,000-seat facility is the home pitch of Inter Miami CF of Major League Soccer and its MLS Next Pro reserve side Inter Miami CF II.

The Miami Freedom Park is a proposed 25,000-seat soccer-specific stadium, retail shops, hotels, restaurants, and a training center to be built in Miami, Florida for Inter Miami CF. Although the location of the stadium is yet to be finalized, the team’s ownership group led by David Beckham has expressed a desire to build on the Miami waterfront. The other locations elsewhere in Miami have been offered as fallbacks.

The ‘Miami Herald’ further stated that the size of the stadium grew after Inter Miami agreed to discuss hosting University of Miami Hurricanes football games (the Miami Hurricanes football team represents the University of Miami in football) with the Coral Gables school. This vote on the massive real estate deal had been delayed four times over several months. The approval of the lease agreements creates significant momentum for Inter Miami’s owners, who still need Commissioners to approve zoning changes before the project can move forward.

A zoning vote is expected to take place before the end of the year. Amid a flood of criticism from skeptics and support from soccer fans, the vote on April 28th came after some compromises were made.

After hours of sometimes tense debate and negotiation with team owners, financial terms changed on the floor as City Commissioners proposed amendments to a set of lease agreements between the City (Miami) and Inter Miami’s owners. The changes include a bump in the overall annual rent floor to $4.3 million from $3.57 million, an increase in rent during the construction period and a revenue-sharing provision that provides the City six percent of gross revenue instead of five percent if that figure is greater than the rent floor.

Additionally, the City will order two new appraisals and use them to calculate what fair market rent would be on the property. To boost the amount, possibly past $4.3 million, the City and the team agreed to use a number that assumes the property is not contaminated – Melreese was built atop a layer of toxic ash from an old municipal incinerator. Any development on the site would require extensive environmental cleanup, and the Mas brothers have committed to shouldering the cost of the remediation. They can still ask for Federal and State aid under environmental programs, but the vast majority of the project is required to be privately-financed without taxpayer dollars.

In 2018, voters authorized City officials to negotiate a no-bid deal with Beckham and his partners, but the final lease agreements required approval from four of five Commissioners. Commissioner Manolo Reyes had pledged to vote against the Miami Freedom Park since it was conceived in 2018. He was the lone ‘No’ vote on April 28th – “I tried,” he quietly said to a reporter in the moments before the vote.

The meeting at the Miami City Hall was attended by critics and supporters, including the Inter Miami soccer players Victor Ulloa and Damion Lowe in their pink uniform shirts.

Enthused Fernando Fiore, a Spanish-language sportscaster and soccer booster in South Florida, “This is a great moment for all of us, and I’m so happy that it’s a great deal for all the Miami citizens.”

The Miami citizens celebrated after the vote by donning an Inter Miami scarf and hollering “Gooooaaaal!”

After the vote, Miami Mayor Francis Suarez thanked the Commission, the team and supporters of the deal, which he had championed since its inception. The vote marks a significant legislative win for the Mayor’s municipal agenda.

Suarez told reporters, “I have never been prouder to be a Miamian than I am today.”

Jorge Mas beamed with pride outside the City Hall during an impromptu presser where he said he never lost faith that the deal could be sealed – “No matter how difficult, how long, how frustrating, good days and bad days, I always knew that this would happen.”

The Commissioners, several of whom had previously kept their requests for changes close to the vest, spent much of the discussion listing the items they wanted to see in the agreement.

Commission Chairwoman Christine King wanted local preference in hiring to make sure Miamians got jobs at the complex, and she wanted to guarantee a percentage of minority-owned businesses will operate at Freedom Park.

Commissioner Alex Díaz de la Portilla, whose district includes Melreese, wanted to increase the percentage of gross revenue that would go to the City. Commissioner Ken Russell wanted to ensure that $20 million for parks in the City was going to be distributed fairly across districts, and that a living wage deal for workers at Freedom Park would be bumped up to $18 an hour. The chief architect of the final deal was Commissioner Joe Carollo who requested a boost in the dollars the City would receive in this deal.

In addition to the changes to the minimum rent and negotiating a deal to have Inter Miami commit to funding maintenance of the roadways in Miami Freedom Park, Carollo pushed team owners to increase the rent for the period of time the stadium is under construction. The construction rent is increased to $650,000 from $500,000 at 18 months after the lease is signed, after which there would be another increase of $100,000 a year for four years and a $1 million penalty in the fifth year if the stadium is not completed.

Carollo also pushed for payments to the City to be moved sooner in the lease’s timeline, including two $12.5 million payments that are meant to fund the long-delayed Baywalk-Riverwalk projects and other parks initiatives across the City.

Commented Carollo, “We squeezed the orange until there was no juice left.”

There was a tense moment when three of the Commissioners called for a vote, and Russell interrupted by saying he planned to vote ‘No’. He and Díaz de la Portilla started arguing after Russell complained he had not had a chance to outline his unmet demands. When the conversation grew heated, King called for a 30-minute break. At one point, Suarez pulled Russell into a backroom. By the time Commissioners took their seats again, the votes were there to approve the lease.

In the end, the Mas brothers agreed to the changes that made the Commissioners comfortable with approving the project. Suarez said the City is committed to preparing the final contract in time for the delivery of the two new appraisals so the rent figure can be quickly finalized and both parties can sign it quickly. City attorneys and team lawyers are expected to take the verbal assurances made at the meeting on April 28th and put them into legal documents. Any major disagreements could result in the matter returning to the Commission.

The ‘Florida Politics’ stated that Mas unenthusiastically gave a preliminary ‘OK’ to several other changes that will cost him and his partners millions more.

He conceded to raising the hourly wages of Freedom Park employees to $18, ensuring that construction workers on the stadium portion of the project will be paid a responsible wage and paying more rent during what is expected to be a lengthy soil remediation process done at Inter Miami’s expense.

The ‘Florida Politics’ further stated that Mas has estimated the team will spend approximately $1.3 billion to turn a large portion of Miami’s public Melreese golf course into a 73-acre, multifaceted development. Beyond the 25,000-seat stadium, the project will include more than one million square feet of commercial and office space, 750 hotel rooms, a parking structure with rooftop recreation fields, and 58 acres of parkland.

Earlier, on April 26th, Agriculture Commissioner and gubernatorial candidate Nikki Fried weighed in on the pending pact. Miami officials shouldn’t sign off on anything, she said, until they receive more input from the public – “Deals of this magnitude should always be executed in the sunshine. There should be an abundance of community engagement, a wealth of public input, and full stakeholder investment… If that takes years, then so be it.”

Miami voters in 2018 approved the Freedom Park plan, including its non-stadium components, by a 60-point margin. The City never solicited other development offers for the golf course land.

The project has drawn criticism over that and other issues, including potential negative impacts on the nearby Miami International Airport and the leasing out of the City’s largest remaining green space at a rate far below the average rent rates in the area.

One of its most vocal critics, documentary filmmaker Billy Corben, released a video recently bashing the deal, which he has likened to an agreement that Miami, Miami-Dade County and the then-owners of the Major League Baseball (MLB) team Miami Marlins reached in 2009. That deal has since reached infamy as one of the worst public-private sport stadium deals in American history.

The video features former Marlins President David Samson, who helped broker the ballpark deal, calling the agreement with Inter Miami a “billion-dollar heist” that, among other things, does nothing to address Miami’s skyrocketing housing costs.

Inter Miami quickly pushed back on those comments, arguing the privately-funded project will reap myriad benefits for the community and make an area that is now a financial drain on the City profitable.

In its present state, Melreese loses Miami money and is pricy to use, costing South Florida residents between $65 and $100 daily and non-residents up to $195 per day. Club members play at discounted rates.