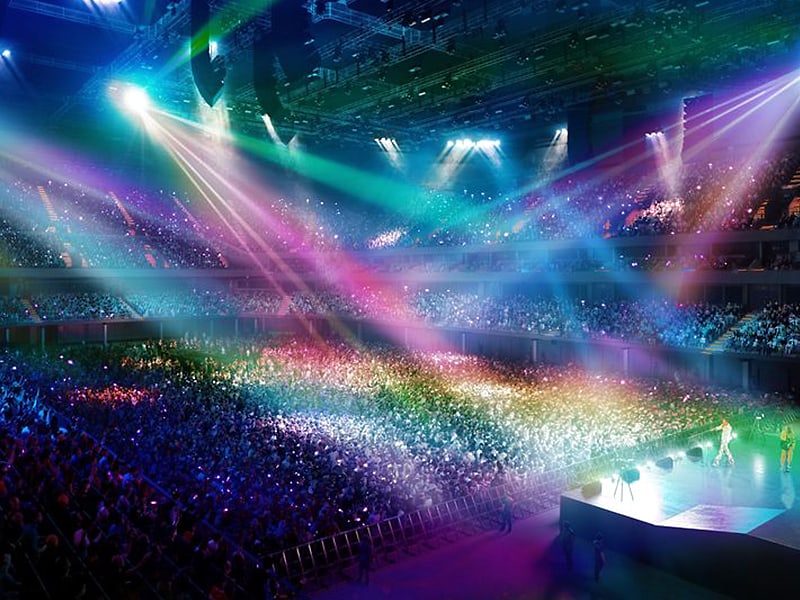 ‘Manchester Evening News’ stated that boasting itself as the only music-first arena, the 23,500-capacity venue will feature an innovative ‘smart bowl’ which was inspired by conversations with rock legend Bruce Springsteen and star Harry Styles (English singer-songwriter). The music-focused approach to the arena’s design has resulted in an impressively large floor space, a noticeably lower ceiling and tiered seating that allows fans to be as close as possible to their favorite musicians.

The 23,500-capacity Co-op Live is an indoor arena currently under construction in Manchester, England (UK). Due to open in 2023, it is planned to have the largest maximum capacity of any indoor arena in the United Kingdom, greater than the existing 21,000-capacity Manchester Arena, which is less than two miles away.

‘Manchester Evening News’ further stated that the arena has also been designed to bring a more immersive experience to live music, with no corporate branding during shows as well as soundproof black curtains in the suites lining the edges of Level 2 to maximize the impact of a show’s sound and lighting.

Said President of OVG International, Jessica Koravos, “Co-op Live is about the fan and the artiste. It is specially designed to deliver the best sound, atmosphere and experience for everyone who walks through our doors. Innovative technology and design will bring a unique live entertainment experience to the United Kingdom.”

The venue is set to open in December 2023 and is currently under construction at the Etihad Campus (stadium in Manchester, England). It is a huge joint venture between the Oak View Group (OVG) and the City Football Group, as well as Harry Styles who’s privately invested in the arena’s development.

The OVG Oak View Group, LLC is an American Global Advisory, Development and Investment Company for Sports and Live Entertainment industries. Based in Los Angeles, it was formed on November 16th, 2015 by Tim Leiweke and his business partner, Irving Azoff. Leiweke is the company’s Chief Executive Officer (CEO).

Manchester (UK)-based the City Football Group Limited is a holding company that administers association football clubs. The group is owned by three organizations of which 78 percent is majority-owned by the Abu Dhabi United Group, 14 percent by the American firm Silver Lake and eight percent by the Chinese firms China Media Capital and CITIC Capital.

In 2020, Harry Styles said, “I am incredibly happy to be partnering with OVG on their plans for Co-op Live. Manchester is an incredible City filled with incredible people and I couldn’t be happier to be involved in this project. It very much feels like coming home.”

Tim Leiweke, CEO of Oak View Group, earlier stated that there are big plans in place for the arena – “Manchester deserves one of the great, great music venues. The arena we’re building here, it’s going to be the greatest music arena ever built. The amount of expertise, knowledge and passion we have on this arena and this design, it’s the best design I have ever seen and the proudest I have ever been.”