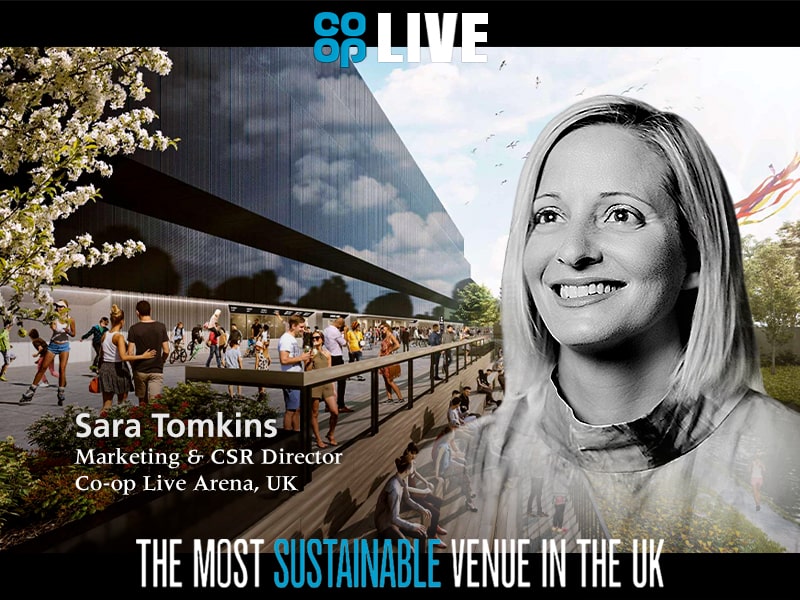 Sara Tomkins joined Co-op Live in November 2020 bringing with her a wealth of experience working as Chief Executive of a charity, an Assistant Chief Executive in the public sector at the Manchester City Council (UK) and she also had a stint with the British multinational retailer Marks & Spencer.

The Co-op Live Arena is an indoor arena currently under construction in Manchester, England (UK). Due to open in 2023, it is proposed to have the largest maximum capacity of any indoor arena in the United Kingdom, greater than the existing Manchester Arena which is about two miles away.

The Oak View Group (OVG) and the Co-op are joining forces to develop UK’s biggest and most exciting new arena in Manchester – with the project injecting £350m of private investment into the local area. Co-op Live will be one of the world’s premier music and entertainment venues rivaling New York’s 20,789-capacity Madison Square Garden, the 17,505-capacity The Forum in Los Angeles (US) and the 20,000-capacity The O2 in London (UK). The 23,500-seat entertainment arena price tag is £365,000,000.

The OVG Oak View Group, LLC is an American Global Advisory, Development and Investment Company for Sports and Live Entertainment industries. Based in Los Angeles (US), it was formed on November 16th, 2015 by Tim Leiweke and his business partner, Irving Azoff. Leiweke is at the company’s helm.

Sara Tomkins, Marketing & CSR Director, Co-op Live Arena, UK, tells ‘Coliseum’ in an exclusive how the under-construction Co-op Live Arena has laid out its ‘Green Goals’ and will emerge as the most planet-friendly arena in Europe when it comes on stream in 2023. She further stated that so firm are the arena operators in their sustainability objectives, that even “people will be hired within Manchester so that they could walk down to the venue and thus, in a way, help in reducing carbon footprints”.

Stated Sara Tomkins, “It is going to be a very special place and a fantastic venue. Though the venue has been designed for music, it will host everything – from sport events and comedy gigs to award shows and family entertainment, effectively doubling Manchester’s live events every year.”

She added, “Renowned design practice Populous has designed the facility and though the venue is huge, but it is a very intimate space. The low ceiling seats close to the stage and large standing floor space will create an electric, atmospheric yet intimate live music experience.”

Tomkins stated that due to its advanced acoustics, the whole sound vibration will be “Truly spectacular. Due to COVID, we have all missed live music events and live music is more about hearing rather than watching. And I think the design is very important on how you respond to the act and how the audience is connected to the event.”

She informed that the arena is being constructed on the site of the former Bradford Colliery and it will have as its neighbor the 55,097-capacity Etihad Stadium – “The Co-op Live Arena will sit on a great neighborhood site as well – a football club, a national tennis center, sports center, and velodrome, which will go on to create a very healthy environment.”

Tomkins pointed out, “Talking about venues being about communities and being about place, for us it is very important in Manchester that we are an inclusive venue and we are for everyone. Co-op is our main sponsor and it is very much involved in community service as well and we are donating million pounds in charity from which the community will benefit.”

Co-op Live will be one of the most environmentally sustainable arenas in Europe with an ambition to be a net zero carbon arena:

The arena will be in every sense sustainable and will come armed with solar panels, air source heat pumps, recycling, zero-waste and free water refills and supporting local producers, stocking Fairtrade ingredients and delivering only the best food and taste experiences.

Co-op Live is firm on its net zero carbon ambitions which will help deliver on its plans to be the UK’s most sustainable arena. It will be as sustainable as possible from construction to opening and beyond.

Asserted Tomkins, “When it comes to putting people and planet first, we do more than any other venue in the world. The arena will focus on renewable and Manchester is famous for rains. With our net zero strategy, the arena will boast solar roofs.”

She continued, “Co-op Live is for the planet – the best live music experience in the United Kingdom with the goal to be one of the most sustainable venues in the world. It will be carbon-neutral that is why the term planet-friendly vibes and will have the world’s leading sustainability rating – BREEAM. During construction, we are using pre-fabricated cores and fabric ducting (collapsible and lightweight). We are also using electric vehicles. Co-op Live is powered by nature and is 100 percent electric.”

The arena is supporting local producers and the planet with sustainably sourced, local food and produce as well as working with local food donation programs to make sure nothing goes to waste.

Explained Tomkins, “The solar-powered roof and Green energy supply will keep the lights off. Our building is smart and the environmental technology is great. Hi-tech ventilation, air filtration systems will ensure the air stays fresh and clean and we call them our ‘Super fans’. LED lights will illuminate the space and we will be harvesting Manchester’s rain and our loos have been so designed to have 100 percent rainwater harvesting flushes. We will be planting trees to purify the air and we are also working with the local food donation programs to avoid food waste from Co-op Live’s 32 bars, restaurants and marketplaces.”

BREEAM, first published by the Building Research Establishment in 1990, is the world’s longest established method of assessing, rating and certifying the sustainability of buildings.

The Co-op Live Arena will establish a framework for measuring, tracking, reporting, and reducing carbon impacts, addressing Scope 1, 2 and 3 emissions.

Tomkins stated that a lot of things will have to be taken into consideration when it comes to Scope 1, 2 & 3 emissions – “The operational part of it, we have to think about the fans, we have to think about how we can drive a whole behavioral change in what people enjoy and experience. Of course, we will have to look at how we can generate fuel, our energy and we do work at night, so solar panel is great and you can use that to generate electricity. We, along with our partners, will try to use deep green energy but everything is not always green and you are always coming up with some kind of issues on that.”

She continued, “As far as staff commuting is concerned, we would recruit people locally and we are looking at 75 percent of the population we will recruit who will be from Manchester or even 25 percent from East Manchester or within walking distance to the venue. This to ensure that the arena leaves zero carbon footprints, and we will monitor and measure how our staffs commute to our venue. We are not thinking about parking spaces for staff. We are encouraging them to travel by public transport.”

Tomkins signed off by stating that all their partners – Populous, Elavon, Co-op, Manchester City Football Group to name a few will have to see through their lens to realize the Co-op Live vision and “We sign up to a venue partner agreement. We will also have conversations with artistes and we will also want them to be a part of our story and will have an eco-friendly rider for artistes.”

Sara Tomkins made it clear that the Co-op Live Arena motto is – ‘We are here for now and for the long haul. We are doing more to use less and it is planet first for us.’