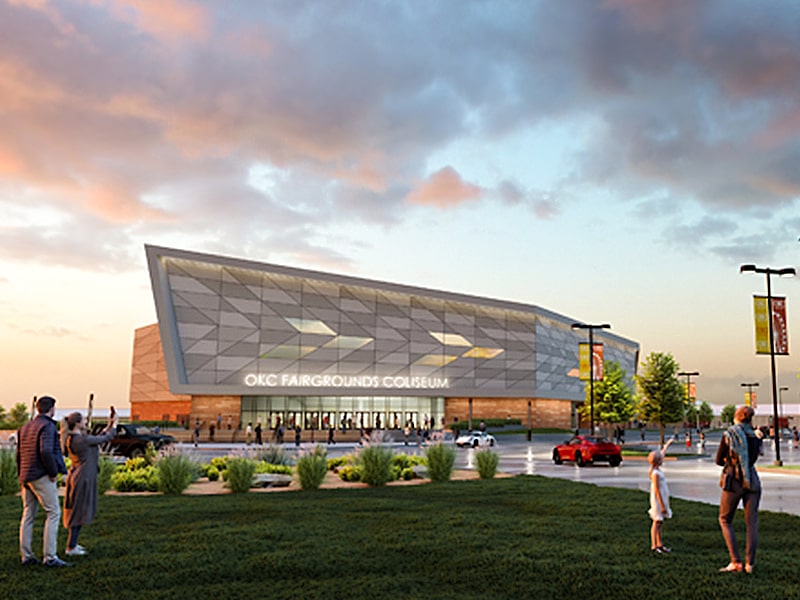 A request for bids to construct a coliseum at the OKC Fairgrounds in Oklahoma (US) will go out immediately, following the recent authorization by the Oklahoma City Council.

Completion is expected in Spring or Summer of 2024.

‘The Journal Record’ quoted project architect Travis Pawley as stating, “Hopefully, construction will begin right after the fair this year.”

The Oklahoma State Fair, Inc. is a not-for-profit corporation that serves the people of Oklahoma (US) and is dedicated to continuing the organization’s heritage of education, entertainment and economic development through the operation of the OKC Fairgrounds and the annual Oklahoma State Fair.

‘The Journal Record’ further stated that the Council approved the final plans and specification for the $102 million project, which will be funded with $55.5 million from MAPS 4 tax collections, $21.8 million from hotel tax revenue and other sources.

Put in David Holt, the Mayor of Oklahoma City, “This was a fairly momentous vote.”

The new facility will replace the Jim Norick Arena, which was named for the Late Mayor and is affectionately known as ‘The Big House’. It opened in 1965 and today hosts events more than 250 days a year.

The 10,944-capacity Jim Norick Arena is a large multipurpose arena located at State Fair Park in Oklahoma City, Oklahoma (US). Completed in 1965 at a cost of $2.4 million, it was the largest indoor facility in Oklahoma City until the construction of the Myriad Convention Center.

Added Pawley, “Currently, it has the largest economic impact of any publicly-owned facility we have here in Oklahoma City.”

The plan is to keep the arena operating until the coliseum opens in 2024 and then demolish it.

Ron Norick, Chairman of the Oklahoma State Fair Board of Directors and a former Mayor like his father, said planning for a venue to replace the arena started more than 10 years ago when his father was still alive.

Noted Norick, “I can assure you that he would be very happy when the Jim Norick Arena is removed and the new coliseum is open. On behalf of the 15 major horse shows that we produce in Oklahoma City, all those executives are extremely excited that this happened to). They’ve been talking about it for years.”

Norick said the horse shows generate about 185,000 hotel room stays a year. Events bring about 1.3 million visitors to the fairgrounds annually with 47 percent coming from out of the State – “And when you add the fair to it, we have more than 2.1 million people.”

The coliseum is designed by Populous Inc., a Kansas City-based architectural and design firm specializing in sports facilities, arenas and convention centers.

It will be constructed of materials that are flexible, functional, durable, and economical and will incorporate Native American and Western patterns seen throughout the State, Pawley said.

He added, “It’s a really flexible space. It can go from about 5,000 seats in an equine and livestock setup up to about 8,000 seats for a basketball or concert type of setup.”

A big back-of-house staging area that leads onto the arena floor will provide easy access from the barns straight into the arena for horse shows, rodeos and livestock events, Pawley said.

The concourse level will have lots of space for vendors’ and exhibitors’ booths, four concession spaces, a lounge area, a bar, and a few suites, he informed.