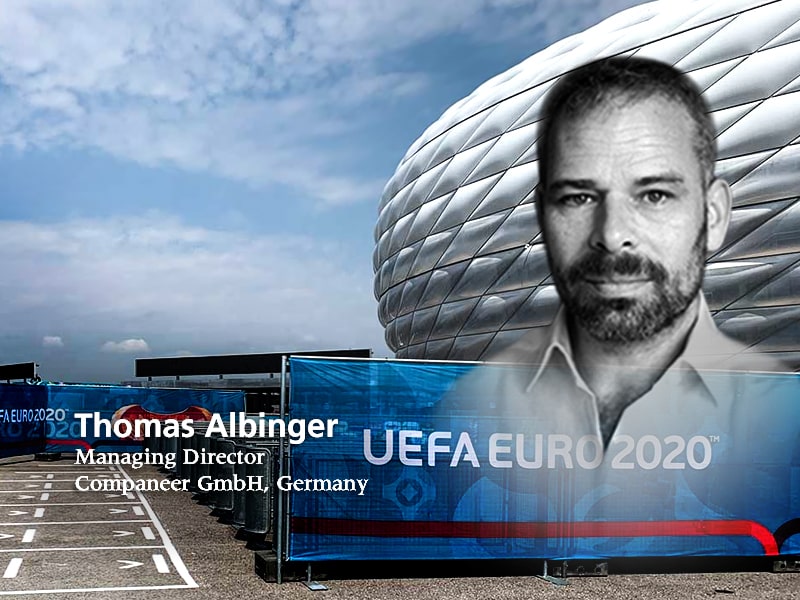 Albinger has a proven track record of managing strategic projects with global players such as Siemens, Volkswagen and Philips before moving into the stadium and arena business with Companeer in 2013.

The soft-spoken Albinger is a doer and a trailblazer. Some of his achievements for industry-leading clients such as the Allianz Arena in Germany are the optimization and digitalization of stadium operations, innovative approaches to security and safety concepts as well as developing and applying empirical methods to analyze movement flows.

Companeer GmbH in a nutshell

Companeer helps to get the best out of your stadium and arena at any stage by delivering:

Thomas Albinger who is presently in the capacity of Managing Director, Companeer GmbH, Germany, in an exclusive talk with ‘Coliseum’ dissects what led to England fans going berserk at the Euro 2020 finals held at the 90,000-capacity Wembley Stadium in London in July 2021. He also talks about the temporary outer security perimeters installed in a venue during the big-ticket events.

There was no method in the madness and it was total mayhem when groups of England fans without tickets forced their way through the Wembley turnstiles before England’s Euro 2020 final against Italy on July 11th, 2021, which Italy defeated England on penalties. Italy was crowned the European champions after shootout win over England.

He examined what led to fans running amok at the Wembley Stadium during the European soccer championship held last year – “I thought times like that are over (fans’ hooliganism) but nevertheless, things happened. There were many reasons why this happened – lack of staff, lack of tickets, the COVID-19 situation (cooped-up world), unhappy supporters, and so on.”

And the main reason he attributed was the temporary fences in the stadium. He wanted to drive home the fact that temporary facilities like mobile fences and access gates do not guarantee foolproof security and a second security perimeter should be drawn around the stadium for big-ticket sporting events.

It is here that the role of Companeer GmbH comes in and Albinger tells in details the expertise of the company in this area.

He added, “We are a small consultancy based in Munich and we are really very passionate about sports and our clients. For Euro 2020, we contracted with the City of Munich (Germany) to a mobility, safety and security concept for the entire City. So, each venue had a concept for itself but we had to ensure that people can travel safely and comfortably from bubble to bubble.”

Further elaborating on his company’s role, he provided, “Actually, we are rather good in challenges where you are not able to change the footprint but you want to upgrade in terms of quality or quantity. And, still when you have a venue you still cannot plan the event because the first thing you have to do is bring this major event home, to your venue. So, we support our clients even in the bidding phase by writing compelling bid books.”

Added Albinger, “For an event like Euro 2020 we were involved with the mobility concept for the Host City of Munich and with the integrated concept on safety and security also for the event. Actually, it was three years of preparation and alignment with the authorities. For weeks together we had to sit together with the authorities or the other stakeholders to ensure that the security part is properly taken care of.”

The existing security perimeter at the Allianz Arena works fine – “It’s a well-balanced system and it’s a working system and one should never change the working system. The challenge was to move the perimeter to the foot of the esplanade at Allianz Arena. It is a one km long walk on the roof of the parking so below this esplanade there are four levels of parking with staircases and it doesn’t appear to be a big challenge. But actually there is 800 meters in between. So, we should have moved down the security perimeter for about 800 meters to the foot of this esplanade.”

The Union of European Football Associations (UEFA) norms require that there should be more space for activation to have a security perimeter which is more far away from the stadium itself so as to have a safer venue and to enhance service by setting up more turnstiles and more gates.

But, Companeer GmbH felt that the above concept was “Not a really good idea. Fortunately, we saw that in advance. We could calculate this would overflow rather soon. And around the entire parking area, which is about 800 meters, we would have to put fences to make it safe to prevent people from sneaking in. And still cars going in, you would probably take the stairs to the esplanade without any security check. So, staff will have to be present at any of those 40 entrances in addition to the existing staff that one needs as well. So, we could prove with a calculation that this remaining space would overflow rather quickly and fortunately we went for a different solution.”

The existing security perimeter at the Allianz Arena is a working system that consists of very compact facilities for safety and ticket checks and some flight escape gates in between that one needs in case of an emergency.

Albinger put across, “Why would anyone want to change the above security arrangement? This is the compromise. We went up close to the existing security perimeter and we did some insulation there. The reason was okay we had three steps to check – first for the ticket, second to do a body control and third for the COVID passes and things like that. So, that’s why UEFA still wanted to have an additional layer installed very close to the existing security perimeter just because lines are shorter there. We did not have to build kilometers of fences and we made it possible still to keep the escape routes by having this kind of Z-shaped arrangement of gates. So, if you do something like that, building to an existing security perimeter, you still have to ensure that it is possible to use the escape routes and you still have to provide enough capacity for the turnstiles else you have a bottleneck at some place. And that’s how we do it by innovative arrangements of those gates and occasionally also by use of innovative products like this IO Gate that we invented.”

It’s a gate which is very standard for access but by pushing one button the middle thing will just move away and then one can use it as an escape route because it’s a broad way.

He added, “We set up some towers like that which though was an eyesore but the staff liked it because it was very helpful – you could give information to people or people would look for these towers to ask for information. I think we introduced the idea of the IO gate in 2019 and now it is a product in the market and you can buy it.”

Albinger warned, “We used the fences used for the construction sites in Munich and the wind blew away everything overnight and we had to reconstruct it for the next match in the morning.”

Albinger concluded by stating, “We have many clients in the Bundesliga who want solutions similar to that for their regular games because the more people you can get into the venue in short time, the better. But one also has to keep in mind that for such an exercise a huge workforce is required. If you provide hundreds of gates, you need to put there hundreds of people.” 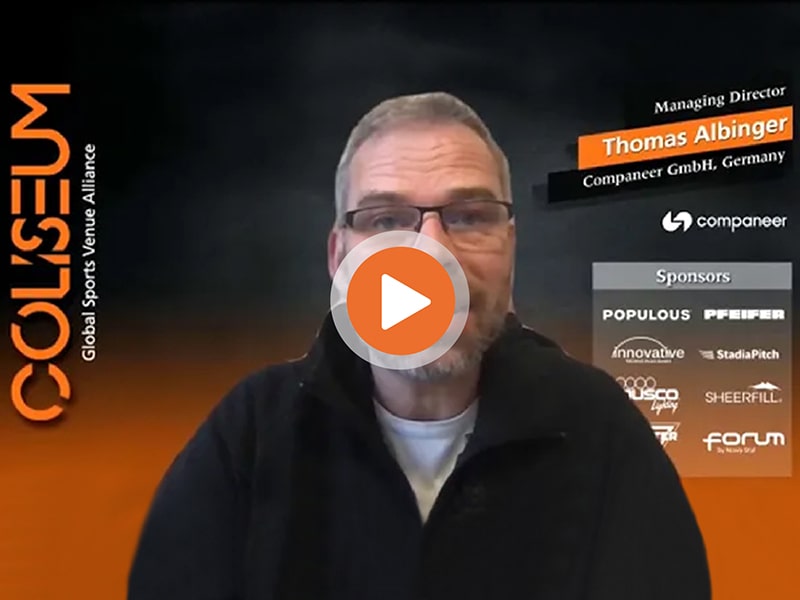