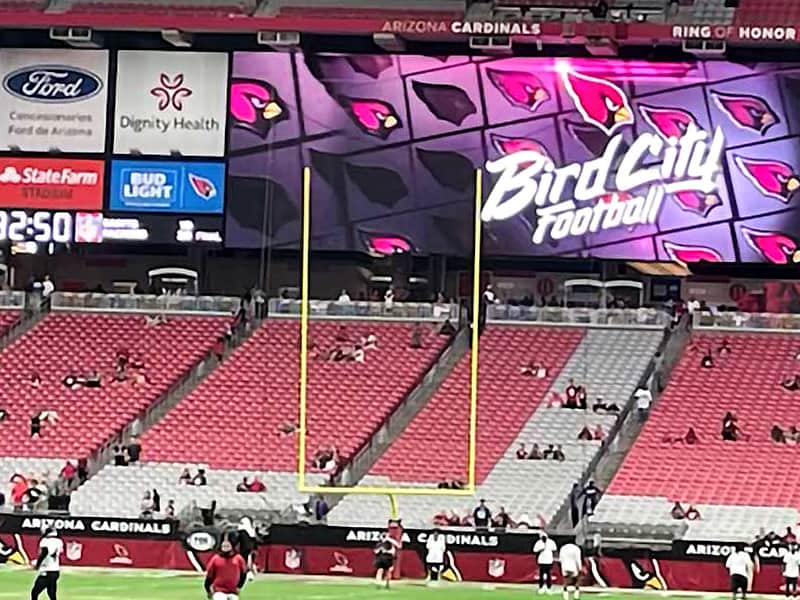 Manufacturing company Daktronics of Brookings, South Dakota (US) has continued a partnership with the National Football League (NFL) team Arizona Cardinals and their residence – the State Farm Stadium – to deliver an upgraded LED video display to the North end of the venue in Glendale, Arizona.

‘Daktronics’ stated that the new LED video display was manufactured and installed this Summer ahead of the first home preseason game of the 2022 football season and will be used for football’s championship game at the end of the season.

Daktronics helps its customers to impact their audiences throughout the world with large-format LED video displays, message displays, scoreboards, digital billboards, audio systems and control systems in sport, business and transportation applications. Founded in 1968 as a USA-based manufacturing company, Daktronics has grown into the world leader in audiovisual systems and implementation with offices around the globe. Discover more at www.daktronics.com/en-gb.

Daktronics is one of the sponsors for Coliseum Summit US to be held at the Dignity Health Sports Park in Los Angeles from September 28th to September 29th, 2022.

The 63,400-capacity State Farm Stadium is a multipurpose stadium in Glendale, Arizona, United States, West of Phoenix. It is the home of the Arizona Cardinals of the National Football League (NFL) and the annual Fiesta Bowl. The State Farm Stadium replaced the 53,599-capacity Sun Devil Football Stadium in Tempe, Arizona, as the home of the Cardinals.

‘Daktronics’ further stated that the North end zone display features 10-millimeter pixel spacing and measures 30 feet high by 117 feet wide, that’s 3,663 square feet totaling 3.1 million pixels. It is 44 percent larger and has more than seven times as many pixels as the previous display. Aside from the increase in resolution, the new display includes the same capabilities of showing all the game information, out of town scores and other statistical information fans expect to see at football games and other live events.

Informed Jay Parker, Daktronics Vice- President of Live Events, “This upgrade will have State Farm Stadium prepared to host the largest football game of the year while also bringing an improved gameday experience to Arizona Cardinals fans all season long. We’re honored to continue our longstanding relationship with the team and venue as we build something we can all be proud of in Arizona.”

Two ribbon-style displays were included with these upgrades to help supplement the main display and create an improved atmosphere for audiences at every event. These displays also feature 10-millimeter pixel spacing and add to the entire system which now totals more than 20,000 square feet of digital display space.

Daktronics has grown with the sports industry from the company’s beginnings in 1968. Today, the company has integrated LED super systems in nearly 60 percent of all professional sports facilities in the United States and Canada.