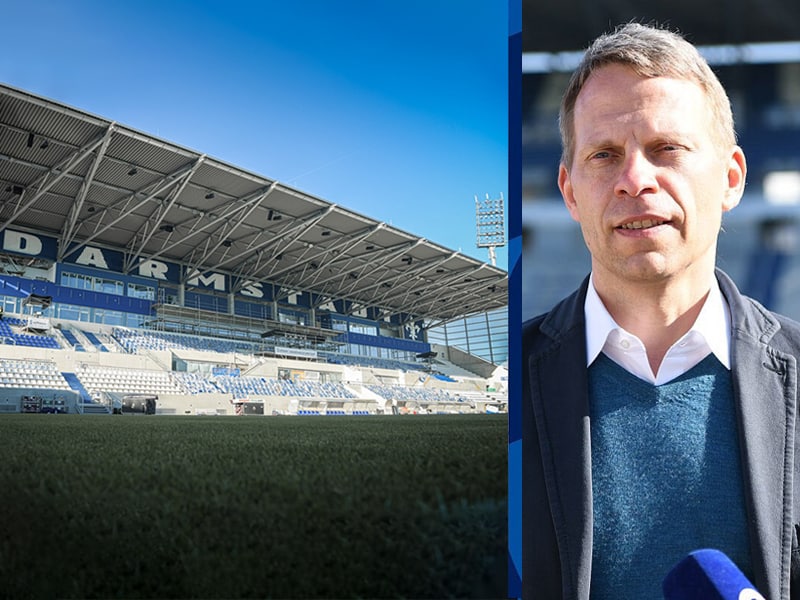 The General Manager of the 2. Bundesliga club SV Darmstadt 98, Michael Weilguny, has informed that the grandstand work of the club residence – Merck-Stadion am Böllenfalltor – is almost nearing completion and the infrastructural development work of the stadium which is currently underway is a “milestone moment” for the club.

‘SV Darmstadt 98’ quoted Weilguny as stating, “Since 2015, we have been faced with the Herculean task of sprucing up the entire infrastructure of the club – from a dilapidated structure to transforming it gradually into a spiffy soccer stadium. We started with the training pitches, construction of the new youth academy, the office, and then the entire arena. And we finally started makeover work of the stadium per se. Still, few tasks remain to be finished.”

Sportverein Darmstadt 1898 e.V., commonly known as Darmstadt 98, is a German football club based in Darmstadt, Hesse. The club was founded on May 22nd, 1898 as FC Olympia Darmstadt. It plays in 2. Bundesliga – the second division of professional football in Germany.

Merck-Stadion am Böllenfalltor is a multiuse stadium in Darmstadt, Germany. It is currently used for football matches and is the home of SV Darmstadt 98 of the 2. Bundesliga. The stadium has a maximum capacity of 17,468 since its most recent renovation works.

Though the main grandstand work is yet to be totally over, yet an opening game is being played on December 17th at the facility between Darmstadt 98 and the Young Boys (Swiss sports club based in Bern, Switzerland).

Stated Weilguny, “Such large-scale renovation work needs considerable time. Moreover, in the current volatile economic scenario, supply chain problems and skyrocketing prices of construction materials, such revamp work takes even more time. But we have decided to hold the game on December 17th despite the grandstand work going on because the long Winter break will enable us to draw people’s attention to the infrastructural developmental works going on in the venue. Moreover, for the first time since 2018 end, we can use all the seats on the grandstands once again. This is why we decided to hold a matchup on December 17th. Yes, a few of the inside areas are still not ready to be used but that is a small price to pay if one looks at the overall majestic development of the grandstands. We should be ready to look at the overall bigger picture of development. And I believe ‘The Lilies’ also look at it the same way. I want to cash in on this opportunity to show our overall stadium development when the Swiss league bosses will also come visiting with the Young Boys for the December 17th match.”

He also asserted that though the stadium will soon wear an haute look, yet, owning the stadium will not come with it set of advantages for the club – “If we stay as a tenant at the stadium, sometimes we can hold the rent for a while if faced with fiscal problems. This was specially noticed when COVID-19 was at its peak in the world. But, if you own the stadium, you have to make the payment. We were forced to take up the ownership of the arena because of licensing and security reasons. Of course, owning a stadium also has its plus points.”

Weilguny added that as owners of the stadium, the club was in a position to better respond to the wishes of the fans and its members. This is why we have gone in for massive redevelopment and have not built an arena with four closed corners and hardly any standing room. In addition, all marketing rights are with us, be it for the naming rights or for advertising or catering rights. We have the reins in our hands, which is a huge advantage. The club can also proudly say that they own the facility.”

‘SV Darmstadt 98’ further stated that the club boasts fans, members, the Science City of Darmstadt, and the State of Hesse as sponsors. In fact, the community as a whole sponsors the club and “we are happy about the increase in our number of members over the past few months and look forward to every new addition to ‘The Lilies’ family.

SV Darmstadt 98 decided to carry out the majestic repurposing work of the stadium and not move from Darmstadt as “The heart of ‘The Lilies’ have been beating here since 1921. It is a stadium which is close to the City Center and sits in a very central location. For fans to get to the stadium is a cakewalk, they can reach either by walking, the train station sits next to the venue and the pubs are also close by. For the fans, the location of a stadium matters a lot.”

The City of Darmstadt and Hessen State have loosened their purse strings for the redevelopment work of the club and ‘The Lilies’ too have picked up the tab for their home upgrade work and are “proud” of the fact that they are in a position to pay for their own stadium spruce-up work.