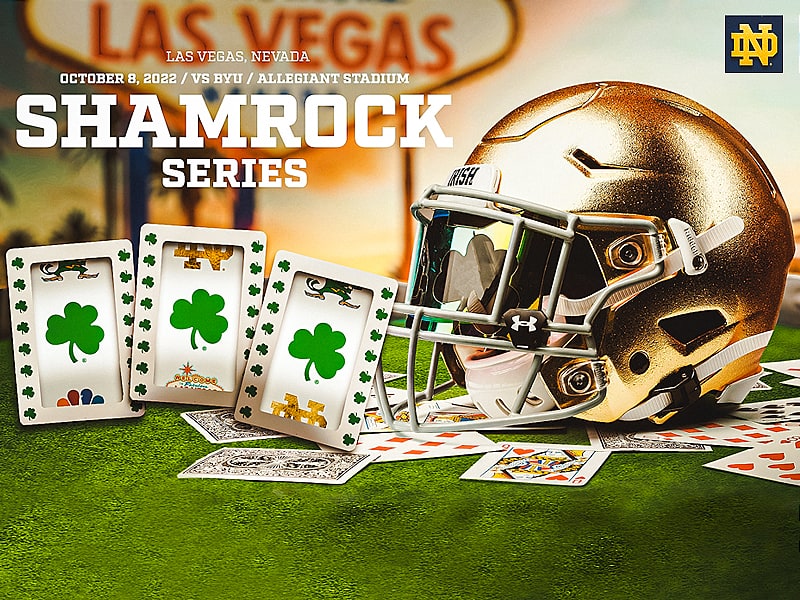 The University of Notre Dame football team – Notre Dame Fighting Irish football – will be heading to Las Vegas (US) for the 2022 Shamrock Series game against the Brigham Young University (BYU) Cougars.

The ‘Allegiant Stadium’ further stated that the game will be the ninth all-time meeting between Notre Dame and BYU. The Irish lead 6-2 in the series, with the most recent meeting occurring in 2013, a 23-13 Notre Dame win in South Bend.

The 65,000-capacity Allegiant Stadium is a domed stadium located in Paradise, Nevada, United States. It serves as the home stadium for the Las Vegas Raiders of the National Football League (NFL) and the University of Nevada, Las Vegas Rebels college football team. Located adjacent to the world-famous Las Vegas Strip, Allegiant Stadium is a global events destination, highlighted by the arrival of the NFL’s iconic Raiders in 2020. Allegiant Stadium, which won ‘Best Venue’ honors at the 2020 World Football Summit Industry Awards, is ideally located for both visitors and locals, fully enclosed and climate-controlled with a capacity of 65,000.

The Notre Dame Fighting Irish football team is the intercollegiate football team representing the University of Notre Dame in South Bend, Indiana (US). The team is coached by Brian Kelly and plays its home games at the campus’s Notre Dame Stadium, which has a capacity of 77,622.

The BYU Cougars football team is the college football program representing Brigham Young University in Utah (US), a private university owned by The Church of Jesus Christ of Latter-day Saints. The Cougars began collegiate football competition in 1922, and have won 23 conference championships and one national championship in 1984.