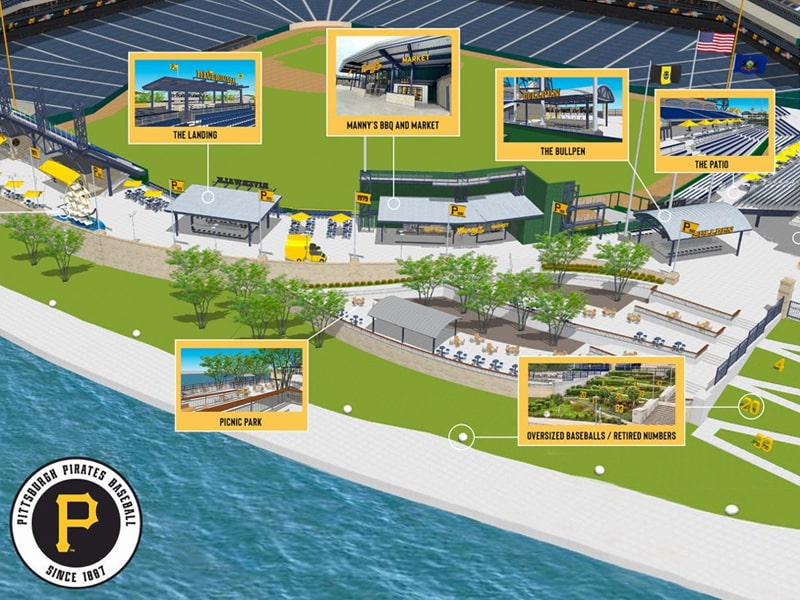 Throughout the two-plus decades that PNC Park has graced Pittsburgh’s (US) North Shore, it’s been universally regarded as one of the finest ballparks in baseball. To ensure it remains that way, the Major League Baseball (MLB) team Pittsburgh Pirates have embarked on a series of significant enhancements to the fan experience at the gorgeous venue, and on April 4th, the team shared details in that regard.

The ‘MLB’ stated that the enhancements, which are in the outfield areas, represent the continued evolution of PNC Park and will provide additional spaces for fans to connect to the action on the field and share in the gameday experience with family and friends. Included are new social gathering spaces with open sightlines to the field, new concession and hospitality concepts, improvements to group gathering areas, new kids play areas and opportunities for fans to learn more about the team’s storied history.

The Pittsburgh Pirates are an American professional baseball team based in Pittsburgh, US. The Pirates compete in Major League Baseball (MLB) as a member club of the National League Central division.

The 38,362-capacity PNC Park is a Major League Baseball (MLB) stadium located on the North Shore of Pittsburgh, Pennsylvania (US). It is the fifth home of the Pittsburgh Pirates. It was opened during the 2001 MLB season, after the controlled implosion of the Pirates’ previous home, the Three Rivers Stadium.

Said Pirates Chairman Bob Nutting, “As we work hard to build our team on the field, we are also focused on the continued evolution of the experience at PNC Park. We need to ensure that PNC Park is a welcoming and fun place for every fan, build on what is best about PNC Park and improve the gameday experience to meet the changing needs of our fans. The evolution also will include new displays that showcase and share with our fans the incredibly rich and inspiring history of the Pirates and baseball in Pittsburgh.”

The ‘MLB’ further stated that the planning process for the enhancements began when Nutting secured the services of one of the leading experts in ballpark design, Janet Marie Smith. Her impressive resume includes lead design work in the creation of the 48,876-capacity Oriole Park at Camden Yards in Baltimore, Maryland (US), the first of the throwback-style ballparks that would later inspire the design of PNC Park. Smith has also led fan-experience projects at several other iconic ballparks, including Boston’s 37,731-capacity Fenway Park and the 56,000-capacity Dodger Stadium in Los Angeles.

Added Smith, “It was clear from the first time I walked the ballpark with Bob [Nutting] that the vision was to evolve the experience and enhance the very best things about PNC Park. There is a keen awareness that fan habits have changed, and the way ballparks are experienced has changed. Every improvement was designed to bring the fans closer to the game by removing walls, barriers and even some seats to be sure that fans enjoy the new spaces while being intimately connected to the field. It was important to add something for every fan, including cool displays for baseball historians, play areas for kids, craft beer and new food concepts for friends to enjoy together.”

The enhancements are designed to offer fans the best of both worlds, the opportunity to follow what’s happening on the field while enjoying the ballpark’s modern amenities and postcard views of the Allegheny River and the Downtown Pittsburgh skyline.

Among the new elements, which have been privately-funded by the Pirates are:

Stated Pirates President Travis Williams, “What we have found is a large contingent of our fans like to congregate and share the ballpark experience together, not just sit in their seats the entire time they are here. These enhancements will give fans, especially families, more reasons to be out on the Riverwalk without having to feel disconnected from the action on the field. That will make it more enticing to go enjoy what we believe has been an underutilized area.”