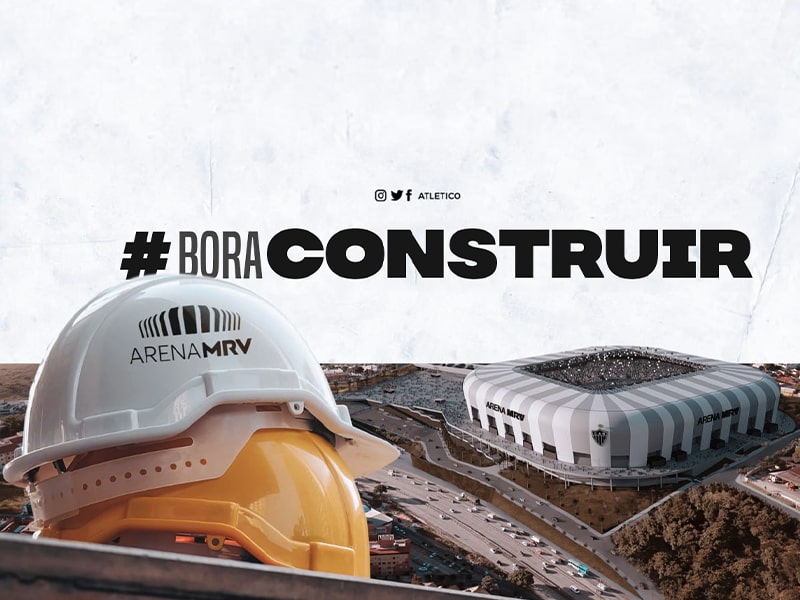 Though Brazil is witnessing a huge spike in coronavirus cases, the Brazilian professional football club Clube Atlético Mineiro decided not to wait till the coronavirus dust settles. Work has begun on the new stadium – Arena MRV – notwithstanding massive cost increase.

Clube Atlético Mineiro is a professional football club based in Belo Horizonte, Minas Gerais in Brazil. The team competes in Campeonato Brasileiro Série A, the premier league of Brazilian football, as well as in the Campeonato Mineiro, the top tier State league of Minas Gerais. Minas Gerais is a State in Southeastern Brazil.

Though Brazil is among the countries to be hit hard and by far the most affected country in South America due to the pandemic, but, it has not led to social life coming to a grinding halt.

At a time when many stadia in Brazil are being used as field hospitals to treat COVID-19 patients, work on the new MRV Arena in Belo Horizonte is moving forward. It was announced way back in 2016 that the Galos would be getting a new home. MRV Arena will be the largest modern stadium opened since the 2014 World Cup. It will also be the first arena that Atlético Mineiro will be able to call home since 1950.

Clube Atlético Mineiro’s long-cherished dream of boasting a new stadium inched closer to becoming a reality as ceremonial groundbreaking took place two weeks back on April 20. Since then, excavation has been ongoing at the hillside in north-western district of Califórnia in the northwest region of Belo Horizonte in Brazil.

Construction of the stadium should be over in 2022. Arena MRV is then expected to hold nearly 47,500 people and will become one of the largest club-owned stadiums in the country.

The club decided to progress with the construction work despite the huge health crisis which has broke out due to COVID-19 as it was waiting for years to get work started on its own new stadium. The Galos had earlier planned to open the facility in 2020. Since all planning hurdles have been cleared, it made sense not to wait any longer irrespective of the coronavirus situation.

However, the project has suffered from price inflation compared to previous estimates. Despite cost having been cut to R$410 million (from initial R$500m), the realistic price today stands at R$530-560 million ($100m / €93m).

Part of the increase can be attributed to valuation of the contracted work, but bulk increase comes due to community mitigation efforts. In order to make up for a venue coming up, local residents will get a new park, public gym, medical center and youth community center, all worth an estimated R$80 million.

Looking at the rise in cost, the Galos are now hoping to secure around R$203 million instead of R$100 million.

“That’s where we have to work very hard commercially to raise all these resources. It’s not that straightforward, you have to have a commercial strategy to sell seats, cabins, parking lots, other properties such as lounges, food, drinks, even sector sponsorships. We have already started to set up a commercial strategy for this to increase the resources we need,” said Bruno Muzzi, CEO of Arena MRV.

Earlier, Atlético President, Sérgio Sette Câmara, while expressing his joy at the beginning of this important stage (groundbreaking ceremony) in the construction of what will be the best and most state-of-the-art stadium in the country, stated on the club’s website, “It is a very special moment for Massa Atleticana. Our dream of having our own stadium is beginning to become a reality. It is a great gift and a huge pride for all Athletes. I sincerely thank everyone who is helping Galo to build the best arena in Brazil.”

The Vice-President of Atlético’s Deliberative Council and one of the main supporters of the project, MRV’s President, Rafael Menin, was pleased as Punch over the beginning of groundwork – “The most important step is the beginning of the earthworks. I would say that in two weeks, we will see a good number of machines. So, we can consider that this is the ground zero of the beginning of the works.”

The installation license of the MRV Arena was given the nod on December 21, 2019. The enclosure of the environmental reserve began on January 28 this year, together with the vegetation suppression work, which means managing the animal and plant species on the land.

Muzzi commented on the beginning of groundwork, “This is one of the main milestones at Arena MRV since the installation license was approved. For us, it is a cause of great joy to reach the earthworks stage, as our planning is taking shape. For years, we have had a multidisciplinary team committed to the project and I see that we are very aligned so that each stage goes according to the established schedule.”

Keeping in mind the grim coronavirus situation, the construction site workers will follow the current municipal and State laws and will conform to all safety and hygiene protocols, as a way to prevent the spread of the fatal respiratory disease, as Muzzi pointed out, “We go to great lengths to protect employees at the construction site. The suppression phase continued in the last month, with great security and awareness. We are all respecting social distancing and following all recommendations.”

The avant-garde private stadium of Atlético Mineiro – Arena MRV will come up in western Belo Horizonte, in the Califórnia district. The club acquired a plot of land from MRV Engenharia (the biggest Brazilian homebuilder and real estate company), lying beside a major avenue and near the ring-road connection. Though not an ideal piece of land due to its high slope, but possibly the best available.

The MRV Arena will be a multiuse arena, with complete structures and flexibility in place to stage shows and other non-sporting events. It is estimated that the completion of the works will take about 30 months.

The 130,000m² of land on which the MRV Arena will sit has been donated to the Galos by businessman Rubens Menin.

The company in charge of construction is Racional Engenharia with business operations in Brazil and approximately R$80m will be used to improve the urban infrastructure of the region.

Inspired by the club colors (alvinegro, white-black stripes), the new arena comes as the first stadium ever designed by Bernardo Farkasvölgyi, the local architect who is a staunch supporter of Galo. Before designing the arena, he visited numerous stadiums in Brazil and Europe. Though his design is a novel concept in itself, his admiration for Allianz Arena (in Germany) seems quite apparent in his design. 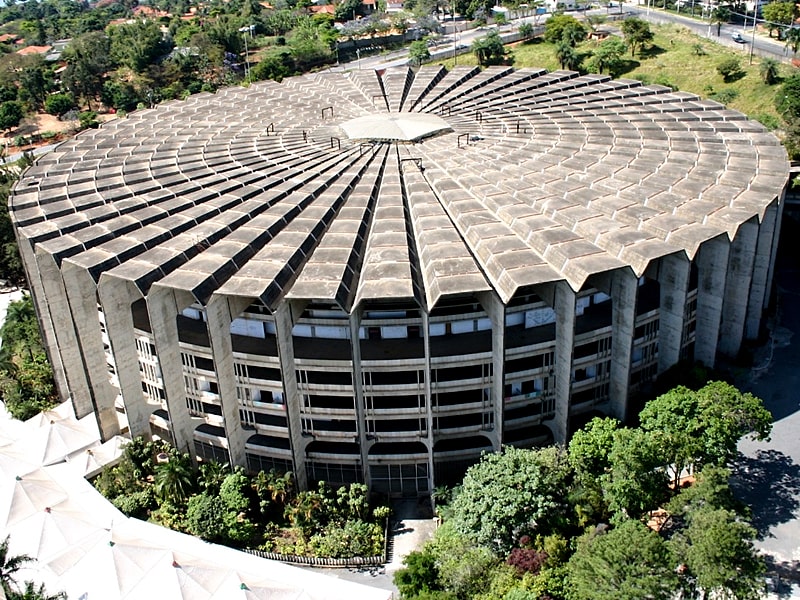 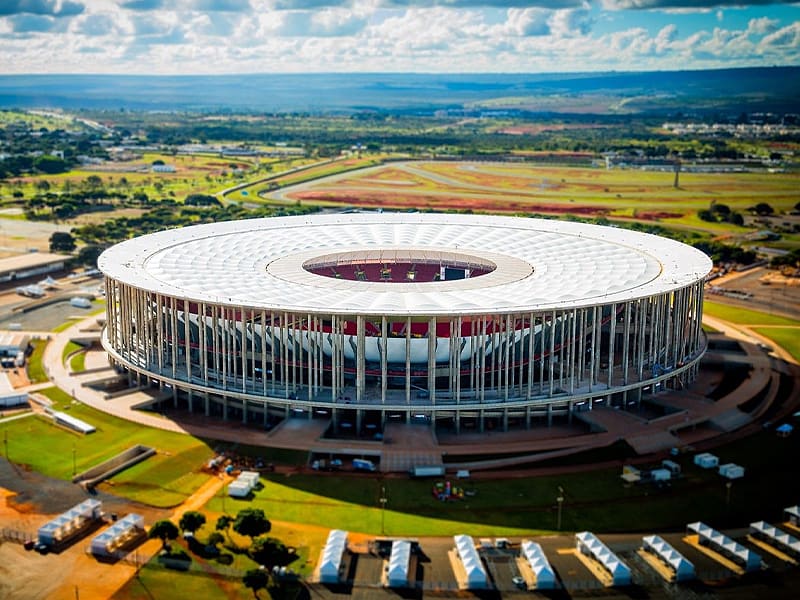 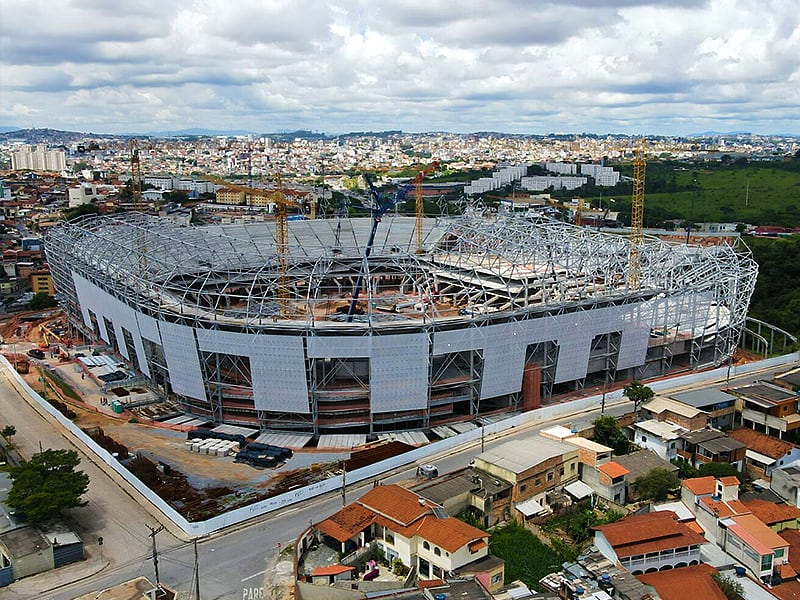