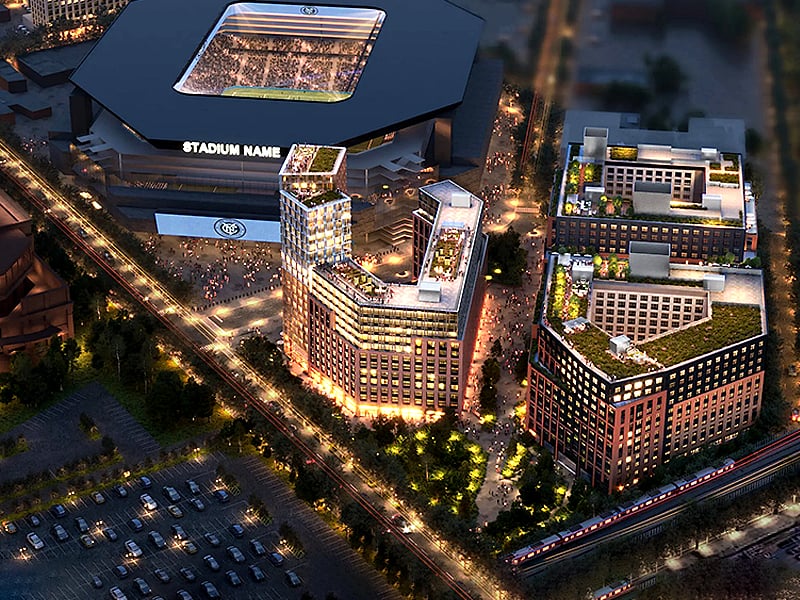 New York City officials have reached an agreement to build the City’s first professional soccer stadium, the centerpiece of a giant mixed-use development that would transform a long-underutilized waterfront section of Queens in New York, US.

‘The New York Times’ stated that the 25,000-seat stadium for the Major League Soccer (MLS) team – the New York City Football Club – is slated to rise on the City land by 2027 in the Willets Point neighborhood of Queens, across the street from the right field foul pole of the 41,922-capacity Citi Field, the home of the Major League Baseball (MLB) team New York Mets, the Mayor of New York City Eric Adams and the soccer team’s officials confirmed on November 15th.

The New York City Football Club is an American professional soccer club based in New York City (US) that competes in Major League Soccer, the highest level of American soccer, as a member of the league’s Eastern Conference.

The stadium would be the first significant major-league sports venue to be built in the City since 2012, and is set to be the focal point of a 23-acre project that includes a 250-room hotel and 2,500 units of housing. Officials say the project would be the City’s largest development of entirely affordable housing since the Mitchell-Lama developments of the 1970s.

‘The New York Times’ further stated that the deal represents Mayor Eric Adams’s most ambitious economic development initiative and comes as he is about to complete his first year in office. It also spells the end of two sagas: The team’s decade-long search for a dedicated soccer stadium and an even longer conundrum about the future of Willets Point, a once thriving conglomeration of auto body shops.

Unlike many stadium deals, including one for the National Football League (NFL) team Buffalo Bills negotiated this year by the Governor of New York, Kathy Hochul, which included nearly $900 million in public funds, City officials said subsidies for this project are largely limited to infrastructure improvements at the site and property tax breaks for the stadium.

The soccer team will pay for the entire construction of the stadium, which is estimated to cost $780 million, City officials said. Neither tax-exempt bond financing nor direct City capital infusions will be used, according to Andrew Kimball, the President of the New York City Economic Development Corporation. The developers are not getting abatements on mortgage recording or sales taxes, he said. But the stadium owners will not have to pay real estate taxes for the duration of the lease.

New York City owns the land on which the stadium and housing will be built, and will lease it to the football club and to a development team that includes Hudson Yards developer Related Companies and Sterling Equities, the development company partially controlled by the Wilpon family, the former owner of the Mets.

Over the course of the 49-year lease, the team will ultimately pay rent of up to $4 million a year to lease the land for the stadium. The team will have the option for a 25-year extension.

The project promises to transform the former industrial zone into a sports and entertainment destination site, comprising the Citi Field, the new soccer stadium and the 14,000-capacity USTA Billie Jean King National Tennis Center, which hosts the US Open. And it could put the new owner of the Mets, the hedge fund Manager Steven Cohen, in better position to win one of the three new State casino licenses up for grabs. He is in talks with Hard Rock to join forces to propose a casino by the Citi Field.

The New York City Football Club’s search for a permanent home began in 2012, three years before the team played its first game. In the waning months of the former Mayor of New York City Michael R. Bloomberg’s administration, talks were underway to build a stadium for the team in the middle of Flushing Meadows Corona Park.

Those plans were derailed by the local politicians and parks advocates, who objected to giving scarce, heavily used parkland to a team that could well afford to build elsewhere. Its majority owner, United Arab Emirates Sheikh Mansour bin Zayed Al Nahyan, also owns the Premier League team – the Manchester City Football Club (UK), and its minority owner is the New York Yankees. The Mets also objected, demanding that it be paid to let soccer fans park in the lots around Citi Field. (The current plan calls for the Mets to receive parking revenue collected during soccer games.)

When the 2013 plan fell apart, the team announced it would play at the Yankee Stadium for three seasons while it searched for a new site. Three years turned into nearly a decade.

Don Garber, the Commissioner of Major League Soccer, preferred that new stadiums be built in urban areas where fans can meet at nearby pubs and restaurants before and after matches, similar to many stadiums in Europe.

Garber said of the new stadium, “This is just another step toward this vision that we want our clubs to be embedded in the community that’s accessible to fans.”

The team considered nearly 20 locations around the City. Some were floated and then dropped, including land along the Hudson River near Greenwich Village and Baker Field, which is owned by Columbia University, because of complaints by neighbors, costs and other issues.

In 2020, just before the pandemic took hold, the owners of New York City F.C. and a group of local developers were close to a deal that would have built a soccer stadium as part of a larger development that would have replaced the parking lots and an elevator parts factory not far from the Yankee Stadium. The deal appeared to fall apart in 2021.

Playing at Yankee Stadium – with games scheduled when the Yankees were on the road – was less than optimal: Baseball fields have uneven dimensions, making for odd sightlines and tight corners for soccer. The quality of the field, which must be repurposed for each soccer game with, for example, the pitching mound removed and sod put over it, has also been criticized.

Despite it all, the team won its first MLS Cup (the annual championship game of Major League Soccer) last year.

To build a bigger following in Queens, the team will play some of its games in the Citi Field until the new stadium opens.

Maintained Marty Edelman, the football club’s Vice-Chairman, “It’s pretty much of a fantasy. We’ve been an itinerant tenant in a number of different spaces. I think our fans need a different GPS every week to figure out where they go to watch us play.”

The saga of Willets Point has lasted far longer than the team’s search for a stadium.

Once a dumping ground that inspired the “valley of ashes” imagery in F. Scott Fitzgerald’s The Great Gatsby, the land eventually morphed into the Iron Triangle, once the City’s largest collection of auto body repair shops and scrap yards, some of which sustained families for generations.

In 2007, Mayor Bloomberg announced a plan to put apartments and office buildings on the 60 acres bounded by the Citi Field, the Whitestone Expressway and Flushing Creek. His plans expanded to include a shopping mall on a parking lot technically mapped as parkland, prompting a lawsuit that stopped the project in its tracks.

Bloomberg’s successor, Bill de Blasio, re-envisioned the plan to prioritize affordable housing, and during his second term, announced a remediation of the polluted site to allow for 1,100 apartments and a school. Most of the more than 200 businesses that made up the Iron Triangle have since been evicted, or bought out. A plan to relocate many of them to the Bronx failed.

City officials initially said that only two businesses remain at the site. After the article published, they revised the number to about a dozen: Roughly half on City-owned property. Officials said the City will evict the tenants on the City land, and the developers are working on acquiring the private property hosting the other businesses.

Waiss Mohibi, who owns garages there, said the City has pressured him to leave, in bad faith. He said he has four years left on his lease and he will not leave without a buyout – “You give me a good deal, I’ll get out. If you don’t, I stay.”

The stadium project and additional housing will have to go through the City’s onerous land review process, which is heavily reliant on the support of the local Council Member. In this case, that Council Member’s support is not in doubt.

Shared Francisco Moya, a Councilman who has been pushing for a soccer stadium in Queens for years, “I’m a kid who grew up playing soccer in the fields right across from Willets Point. We hope to create the same kind of passion that we see throughout the world, where some kid right now who’s playing on Field 11 in Flushing Meadows Corona Park will one day be able to don the jersey of the team that plays right across the way from them.”