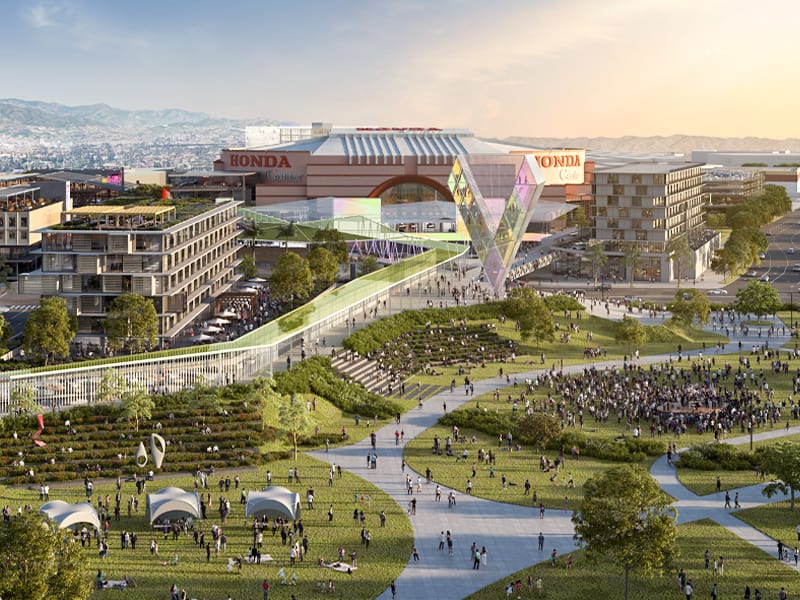 Plans have been unlocked for ocV!BE – a 115-acre mixed-use community and live entertainment district – the price tag of which stands at $3bn (£2.4bn/€2.7bn). The development will surround Honda Center, home of the Anaheim Ducks National Hockey League (NHL) ice hockey team. Honda Center is at Anaheim, California, in US.

The entertainment district is the vision of the Samueli Family, which owns the Ducks. It is hoped that the wide-ranging district can open in 2024 and be ready in time for Los Angeles’ hosting of the Olympic Games in 2028, when Honda Center will stage indoor volleyball events.

OcV!BE will encircle Honda Center with a full range of lifestyle and public amenities, as well as live entertainment venues, including a new 6,000-capacity concert facility, a 68,000-square-foot food hall, restaurants, retail, two new hotels with 650 rooms in total, a 325,000-square-foot office tower, three unique public plazas, 2,800 residential apartment units that will include a 15 percent dedication to affordable housing, 30 acres of open space and parks, and a network of pedestrian bridges and walkways.

The entire development will create 13,000 construction jobs and 3,300 permanent jobs upon completion. An analysis carried out by public finance and development economics firm DTA has predicted that the development would generate more than $2bn in a one-time economic impact.

In terms of annual recurring economic impact and revenue generated, the project would also generate over $400m and will assist the City of Anaheim to bounce back from the disastrous effects of COVID-19, as well as enhance neighborhoods and public safety.

Tim Ryan will serve as Chief Executive of the newly-created ocV!BE Sports & Entertainment company, which will take over the mantle of development and operation of the district. Michael Schulman, Managing Director of the Samueli Family office, will serve as the company’s Executive Chairman.

The Ducks and the City of Anaheim inked a deal in 2018 to extend the team’s commitment to the City for up to an additional 50 years, paving the way for a series of private acquisitions by its ownership and leading to control of 115 acres surrounding Honda Center.

Commented Dan Young, lead Master Planner for the project, “The master plan of this 115-acre district will create a liveable, balanced community that has long been envisioned for the Anaheim Platinum Triangle. ocV!BE will also link the district to the region’s broader assets including Angel Stadium and the Platinum Triangle, the growing Anaheim Resort District, and the largest Convention Center on the West Coast.”

The new 6,000-capacity concert venue will be lodged in the district’s urban park plaza, while the southern-facing plaza will play the role of a hub of sports-focused activity with elevated walkways. The northern plaza will attribute for a collection of smaller club-style venues.

Jay Burress, Chief Executive of Visit Anaheim, said, “ocV!BE will transform Anaheim as a destination. This exciting project will assist Anaheim in attracting and retaining guests, particularly conventioneers, to dine, shop, stay and be entertained in Anaheim, generating significant revenue for the local hospitality industry and the City of Anaheim.”

The announcement comes close on the heels of the City of Anaheim recently revealing plans to bring about a sea change in the area around Angel Stadium, home of the Los Angeles Angels Major League Baseball (MLB) team, into a mixed-use development boasting parks, shops, residential spaces and restaurants.

The Angel Stadium has been dubbed ‘The Big A: 2050’ and would focus on keeping the Angels in Anaheim for the next 30-plus years. Angel Stadium is located just across the road from Honda Center and the development of the two sites would form part of the city’s planning for the Platinum Triangle.

Young told mediapersons that the Ducks and the Angels worked together to avoid duplicating development, with the two projects set to accessorize each other.

“We’re very compatible and synergistic in that way. We are very excited about what they’re doing over there. It will be a great complement. We wanted to make this as much fun on Saturday morning as it will be on Saturday night,” Young added.

ocV!BE will invite visitors to eat, drink and ‘shop till they drop’ before and after events. Anaheim’s dream of a colossal sports and entertainment fun zone that would stretch across a freeway and cover hundreds of acres, anchored by an arena at one end and a ballpark at the other, is on the way to realization.

The Honda Center would get a boost with a grand entrance plaza that could be used for watch parties or holiday ice skating, and the arena would be surrounded by a food hall, beer garden, restaurants, clubs and a 6,000-seat theater. The project includes two hotels, four parking structures, and a redesigned Katella Avenue off-ramp from the 57 Freeway that would lead directly into the Angel Stadium parking area, or into one of the Honda Center parking structures.

The project was submitted to the City on Wednesday for various approvals, with the first openings targeted for 2024 and the completion for 2028, when the Honda Center is scheduled to host Olympic volleyball competition.

Henry and Susan Samueli, the Ducks’ owners, plan to maintain sole ownership of the project and finance its estimated $3-billion cost, Young said.

He added that the Samuelis would not seek to tap the city’s general fund or ask for hotel tax rebates but could pursue Government funding reserved for parks, transportation or infrastructure improvements.

Tim Ryan, who runs the Ducks and the Honda Center, said the Samuelis would continue to invest in the arena as well. He said all the seats have been recently replaced and the Ducks’ locker room has been redecorated, with more revamp work to be done soon. 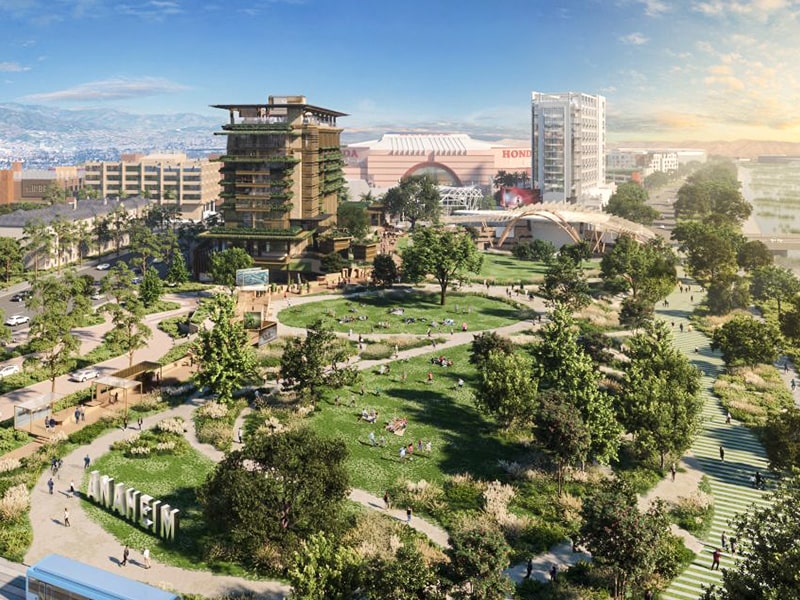 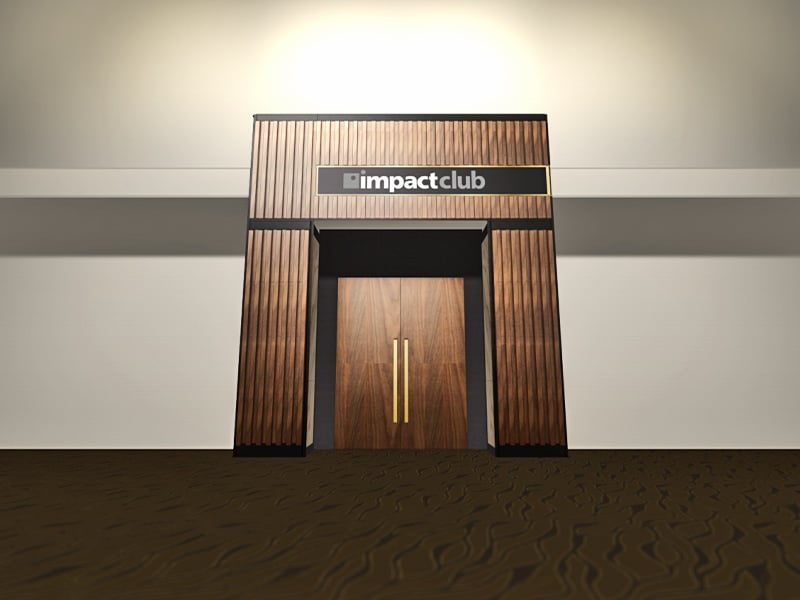 Honda Center all set to make an (impact) 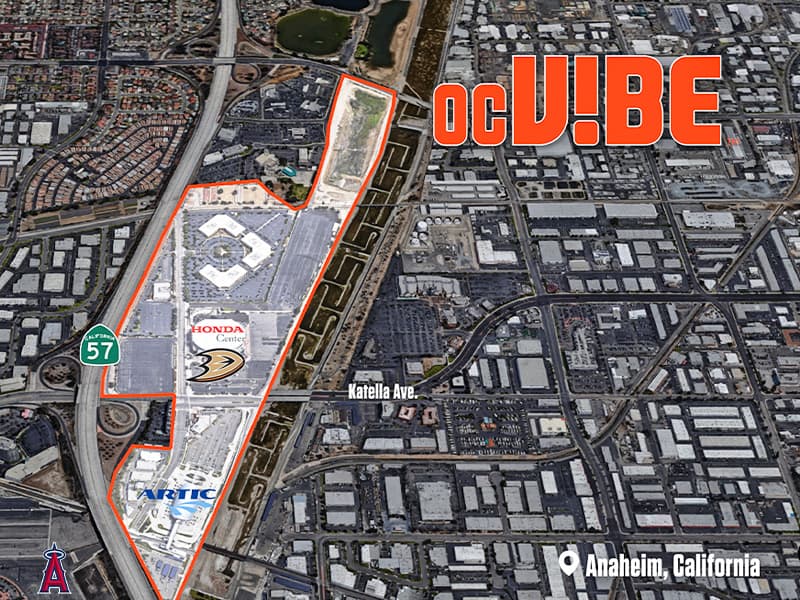