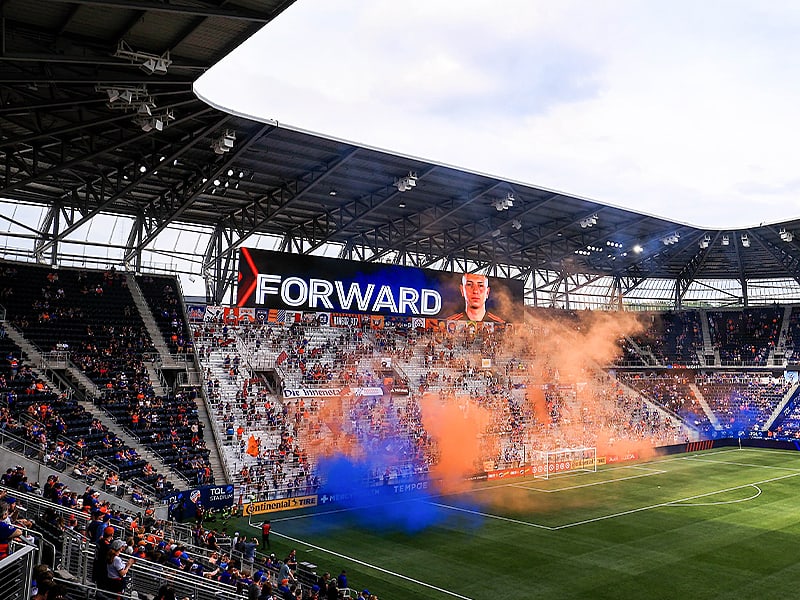 The Major League Soccer (MLS) team FC Cincinnati went down tamely to Inter Miami CF at the former’s debut match at their brand-new dazzling residence – TQL Stadium (US) – on May 16th. The ‘Orange and Blue’ defeat spoilt the stadium-opening party for them.

‘FC Cincinnati’ stated that the final score was 2-3 in favor of Inter Miami CF. Though a limited number of fans were allowed to grace the matchup, but they showed up in full gusto carrying banners, singing, chanting, and banging drums through plumes of blue and orange smoke. Fans were super excited to step into the plush home of the ‘Orange and Blue’ and were satisfied with the COVID-19 restrictions in place and the sheer splendor of FC Cincinnati’s dream home overshadowed everything, including their defeat.

Football Club Cincinnati, commonly known as FC Cincinnati, is an American professional soccer club based in Cincinnati, Ohio (US). The club plays in the Eastern Conference of Major League Soccer (MLS). The team succeeded the lower-division team of the same name and was announced on May 29th, 2018, when MLS awarded an expansion franchise to Cincinnati.

Inter Miami CF is an American professional association football club based in the Miami metropolitan area in US. The team began play in Major League Soccer (MLS) in the 2020 season at the 18,000-capacity DRV PNK Stadium in Florida (US).

Added Garber, “It’s world-class in every way. The size and scale of the facility is dramatic. You walk around this building and it just feels so grand and I think that’s, in many ways, what’s going to be one of its distinctive characteristics.”

Major League Soccer is a men’s professional soccer league sanctioned by the United States Soccer Federation, which represents the sport’s highest level in the United States and Canada. The League comprises 27 teams – 24 in the US and 3 in Canada – and plans to expand to 30 teams by the 2023 season.

‘FC Cincinnati’ further stated that while TQL Stadium has a capacity of 26,000, the crowd for the first game was limited to around 6,000. The team says that will remain the same for the next home game on May 29th. However, it anticipates moving to full capacity for the following home game on June 19th.

‘WCPO’ stated that FC Cincinnati playing its first-ever home game at TQL Stadium on May 16th signaled the start of a new phase for the club and for Cincinnati, where increasingly large segments of the population are fully vaccinated against COVID-19 which till few months back had the United States in its fatal grip and has wiped off more than half a million population with the latest death figures standing at 0.6 million.

Cash is a strict ‘no’ inside the spiffy stadium. If fans plan on grabbing a bite, they will have to bring their card or head to one of the three machines that can convert cash to Visa gift cards.

‘WCPO’ further stated that there are other changes coming to TQL Stadium, including some policy tweaks that differ from Nippert Stadium. Notably, only clear bags will be allowed inside the stadium, so visitors will have to leave their patterned bags and oversized totes at home. Umbrellas are also not permitted in TQL.

FC Cincinnati has compiled everything fans need to know about the matchday experience, A-Z, here.

Fans will get to enjoy an epicurean treat and will be left spoilt for choice. For gastronomes, a taste of Belgium waffle will keep the taste lingering for long.

The team’s new digs are impressive even in the world of professional sports. Garber said that he wants “cathedrals” for clubs in his League, and TQL Stadium fits the bill. He envisions it as part of Cincinnati’s broader rebirth.

So are its fans. Longtime Cincinnati community pillar Carl Lindner III, the team’s CEO, said that “(FC Cincinnati’s) supporters are off the charts and have been such an important part of launching FC Cincinnati and just a huge part of its success.”

TQL Stadium was a project that cost a bomb – hundreds of millions of dollars. Team leadership characterizes it as an infusion of cash and opportunity for the West End, a neighborhood where many historically struggle with poverty and displacement. Community advocates beg to differ and say they’re worried the stadium will boost the cost of living there without uplifting longtime residents.