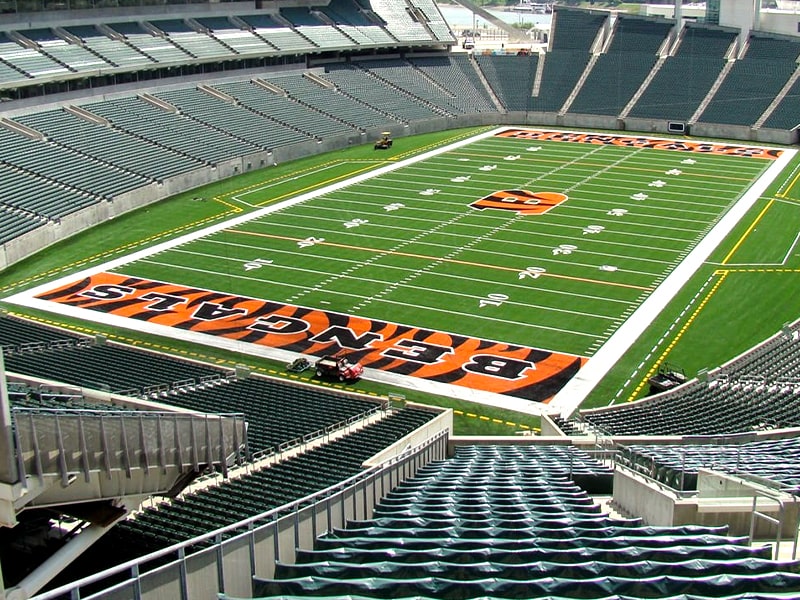 The Paul Brown Stadium in Cincinnati, Ohio (US) won’t have to suffer the same fate as its predecessor, the Riverfront Stadium, an architect told leaders with Hamilton County and the National Football League (NFL) team Cincinnati Bengals on April 26th.

The ‘Cincinnati.com’ stated that the Riverfront Stadium in Cincinnati, later Cinergy Field, was imploded in 2002 to make way for the Great American Ball Park.

The 65,535-capacity Paul Brown Stadium is an outdoor football stadium in Cincinnati, Ohio (US). It is the home venue of the Cincinnati Bengals of the National Football League (NFL) and opened on August 19th, 2000.

The 40,007-capacity Riverfront Stadium, also known as Cinergy Field from 1996 to 2002, was a multipurpose stadium in Cincinnati, Ohio, United States, that was the home of the Cincinnati Reds of Major League Baseball (MLB) from 1970 through 2002 and the Cincinnati Bengals of the National Football League (NFL) from 1970 to 1999.

The 42,319-capacity Great American Ball Park is a baseball stadium in Cincinnati, Ohio. It is the home field of Major League Baseball’s Cincinnati Reds. It opened in 2003, replacing Cinergy Field, their home field from 1970 to 2002. The Great American Insurance bought the naming rights to the stadium for $75 million over 30 years.

The ‘Cincinnati.com’ quoted Demetra Thornton, Principal for architectural firm Gensler, as stating that the Paul Brown Stadium will need $493 million in upgrades and maintenance over the next 20 years. The Bengals and Hamilton County contracted with San Francisco (US)-based Gensler for $375,000 to study what needs to be done to the 22-year-old football stadium.

The Paul Brown Stadium was meant to evolve and grow, not be imploded, Thornton said.

Added Thornton, “The original design was meant to be expanded. We learned from Riverfront. I don’t want this building to be imploded. I want it to stand the test of time.”

Who would pay, and how much, will be determined later during negotiations between the county and Cincinnati Bengals.

This was the first of two studies on the Paul Brown Stadium that will be presented to the Hamilton County (Ohio, US) Commissioners.

The study presented on April 26th provided the first glimpse of what Hamilton County and the Bengals might need to do to the stadium after the team’s lease expires in 2026.

While other Cities, including Buffalo and Nashville, are looking at building new football stadiums costing more than $1 billion, that is not what needs to happen in Cincinnati, Thornton asserted.

Added Thornton, “It’s been well maintained over the last 20 years. What we say in the construction and architecture industry, it has good bones.”

The $493 million figure was just an estimate and not the final price tag for what the Bengals and county will have to negotiate. Included in that figure are repairs, maintenance, upgrades to lighting and elevators, technology, and other improvements.

The study released on April 26th doesn’t involve many of the big-ticket items and longer-range upgrades. They did not specify what those would be, saying it would be to improve the “fan experience”.

A more comprehensive masterplan will be completed at the end of the year, officials and the architect said.

Renovations are a much cheaper option to the taxpayer than a new stadium, said Commissioner Denise Driehaus.

Whether the Bengals will remain in Cincinnati could depend on the results of the lease negotiations with the county, expected to begin in 2024, two years ahead of the lease expiration.

The Bengals released a statement saying they will look at the report and are encouraged.

The Bengals said in the statement, “The condition reflects the care and attention that the Bengals and Hamilton County have taken in maintaining the building to protect the taxpayers investment. Because of that, it looks like the Paul Brown Stadium can continue to be our home for decades to come at far less cost than seen elsewhere.”

For other Cities, the cost of building a new stadium is not cheap.

The National Football League (NFL) team Buffalo Bills has reached an agreement with the State of New York and Erie County for a $1.4 billion stadium, $850 million of which will be taxpayer-funded.

In Nashville, the NFL team Tennessee Titans want to build a new stadium that could cost $1.9 billion to $2.2 billion. At least $710 million of that would be taxpayer-funded, according to a Budget passed recently by the Tennessee legislature. The Titans’ stadium is one year older than Paul Brown.

The Hamilton County Commissioner, Alicia Reece, asked about the possibility of putting a dome on the Paul Brown Stadium. She wants the county to be able to book acts throughout the year for the stadium.

Thornton further informed that putting a roof on an existing structure can have drawbacks, including an inefficient heating and cooling system.

Reece said she still wants the county to look at it and find a way to book the stadium with more acts -“The stadiums are sitting dark too long and not bringing in the dollars.”