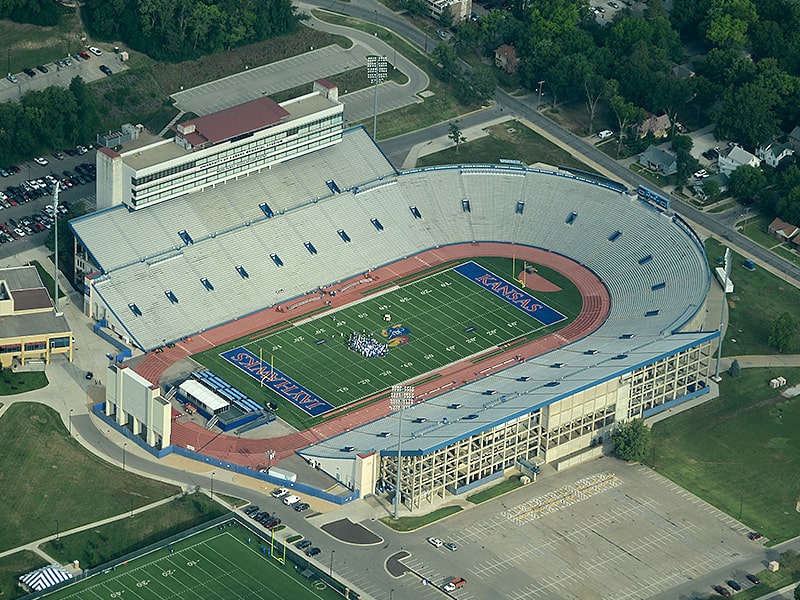 ‘kansascity.com’ stated that the entire ‘11th and Mississippi Project’ aims to transform the area near the intersection of 11th and Mississippi streets with new facilities that could include a mix of conference and entertainment space, retail space and other functions.

The University of Kansas is a public research university with its main campus in Lawrence, Kansas, United States, and several satellite campuses, research and educational centers, medical centers, and classes across the State of Kansas.

The 47,233-capacity David Booth Kansas Memorial Stadium is a football stadium located in Lawrence, Kansas (US) on the campus of the University of Kansas. The stadium was opened in 1921, and is the seventh oldest college football stadium in the country, and is widely recognized as the oldest West of the Mississippi River.

The Kansas Jayhawks football program is the intercollegiate football program of the University of Kansas. The program is classified in the National Collegiate Athletic Association (NCAA) Division I Bowl Subdivision, and the team competes in the Big 12 Conference. The Jayhawks are led by Head Coach Lance Leipold and the David Booth Kansas Memorial Stadium serves as their residence.

‘kansascity.com’ further stated that the project, set to break ground next year, will feature prominently what the University of Kansas calls “major upgrades to the David Booth Kansas Memorial Stadium”.

Kansas Athletics notes that the Memorial Stadium, constructed in 1921, is one of United States oldest football venues. The university’s aim is to “Create a world-class experience for fans while providing Kansas Football the facilities it needs to compete at the highest level, as well as renovations to the Anderson Family Football Complex.”

University of Kansas Athletic Director Travis Goff told newsmen, “We won’t cut any corners on what it’s going to take to have an incredible fan experience. Profound is what the outcome will be.”

No dollar amount for the project has been mentioned. But Goff was later asked specifically if $350 million would cover the total cost – “That’s what I believe we have … that’s in the Board of Regents-approved kind of rolling annual budget,” not committing to that figure.”

The University of Kansas stated that the project “Will start with renovations to the Anderson Family Football Complex, as well as site preparation work related to stormwater, sanitation, Wi-Fi availability, and electrical system upgrades, in the first half of 2023.”

The project will be funded primarily by “Private donations, economic development funds, premium seating sales in the stadium, and future development opportunities that will be created on the site.”

Goals for a reimagined David Booth Kansas Memorial Stadium, University of Kansas said, “Include upgrades to the in-game experience such as seating bowl design with improved sightlines that increase fan comfort and bring fans closer to the field, expanded concessions, restrooms and accessible seating locations, improved concourse circulation, and new premium amenities such as club seats, loge seats and ledge suites. The stadium design will include multiuse spaces to augment any convention and conference facilities that may be part of the project. Kansas Athletics is partnering with Elevate Sports Ventures to conduct fan focus groups to solicit feedback on what fans want in a reimagined stadium. Additionally, Elevate recently completed a survey to understand what seating options and amenities are most important to fans.”

Added Goff, “This project is unmatched in its vision to benefit a broad range of University of Kansas constituents while signaling a new era for Kansas Football. Once complete, this project will ensure our football program has the facilities it needs to compete at the highest level and provide the best-possible gameday experience for student-athletes and fans. Moreover, we are thrilled this project goes beyond football to benefit the entire university and the regional economy.”

The University of Kansas Football Coach Lance Leipold stated, “This project will have a profound impact on the future of Kansas Football and the entire community. It will specifically impact our current and future football players, who will now have a state-of-the-art facility to train in. With an up-to-date facility and a commitment to improve the Anderson Family Football Complex, our day-to-day operation will be more efficient and effective. This is an exciting time for Kansas Football, and this certainly adds to it.”

Goff further stated, “Now, more than ever, college athletics – and certainly sustained success in the sport of football – are critical to the health and vibrancy of our entire university community. There is tremendous excitement for this project among donors and partners who believe in University of Kansas’s mission, and in partnership with KU Endowment, we’ll be reaching out in earnest to our benefactors and supporters to ensure this ambitious vision becomes a reality.”

The University of Kansas has commissioned an economic impact study to analyze the effect of potential mixed-use space that would be developed as part of the project. Additionally, the university will soon begin the process of selecting a project developer to help formulate a vision for how the mixed-use facilities in and around the reimagined football stadium could be used. Additional details about the project will be provided in the weeks ahead.