Pulling out all ‘stops’ to stop Bears’ flight 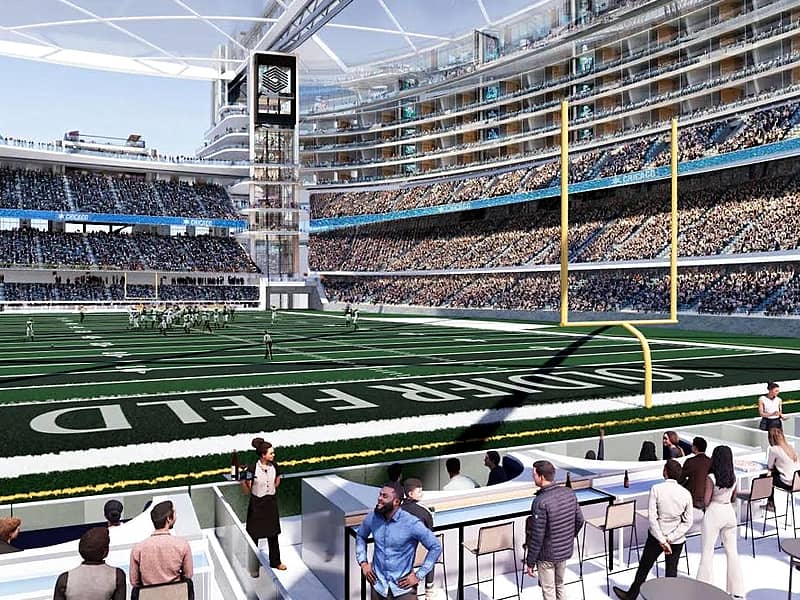 Hoping to turn the eyes of the National Football League (NFL) team Chicago Bears and capture their fans’ imaginations, the developer behind the City’s effort to redevelop the Bears’ residence – the Soldier Field in Chicago, Illinois (US) – unveiled a video on January 8th depicting a revamped stadium under a transparent dome.

‘Chicago Business’ stated that the roughly six-minute video released by Bob Dunn’s Landmark Development sweeps viewers along the lakefront, through Dunn’s proposed One Central mega development and back into a decked-out stadium featuring new year-round fan experiences, a museum, updated club seating, and a convertible North wall that opens up to a new lakefront concert venue.

The Chicago Bears are a professional American football team based in Chicago. The Bears compete in the National Football League (NFL) as a member club of the league’s National Football Conference North division.

The 61,500-capacity Soldier Field is a multipurpose stadium on the Near South Side of Chicago, Illinois, United States. Opened in 1924 and reconstructed in 2003, the stadium has served as the home of the Chicago Bears of the National Football League (NFL) since 1971.

On July 8th, 2022, the Bears revealed that it’s either Arlington Park – where they plan to build their new home – or bust.

The Arlington International Racecourse (formerly Arlington Park, the name was Arlington Park Jockey Club from as soon as 1948 up to 1955) was a horse race track in the Chicago suburb of Arlington Heights, Illinois, US.

‘Chicago Business’ further stated that the virtual tour – narrated by the familiar voice of former Chicago TV news anchor Bill Kurtis – dropped on the morning of January 8th ahead of the last Bears game of the season and with the franchise on the verge of buying the shuttered Arlington International Racecourse property in Arlington Heights, where it is planning a massive stadium and entertainment district. Click here to find the video.

Dunn remains hopeful he and the City can convince Bears ownership redeveloping the bones of Soldier Field’s structure is a better financial option – to the tune of $1 billion to $1.5 billion – for the team rather than building from the ground up in Arlington Heights.

Stated Dunn, “This is the most unique opportunity in sports in this country (US) to create the sports and entertainment venue of the future.”

Under the plan, the stadium would feature a transparent, nonretractable dome resting on four pillars built outside the existing structure. Seating would be increased from 61,500 to 70,000, and private suites would go from 133 to 140. The current dead space in the stadium’s concourses would be remodeled to expand the Veterans Memorial, add six new club areas and quadruple the food and beverage amenities from 50,000 square feet to 200,000 square feet.

Soldiers Field Veterans Memorial is meant to honor the sacrifices of Southeastern Minnesota veterans – past, present and future.

The glitzy and futuristic stadium featured in the video is “not just doable, but doable with a significant revenue advantage and significant cost advantage versus” building in Arlington Heights, he said.

Key to the equation is Dunn’s $20 billion One Central project, which the developer argues would solve two of the stadium’s biggest problems by providing a transit hub that could lead fans directly into the Soldier Field and creating a new entertainment district in the immediate area that modern fans desire when traveling to games and concerts.

But there is no certainty Dunn will be able to convince the State and local officials to support One Central, which is relying on a massive $6.5 billion State subsidy to complete the project. Dunn said he’s waiting on the results of a State feasibility study probing the project before submitting the plan to the City’s arduous zoning process.

One Central overall is a $20 billion mixed-used development that as it’s now planned would create 9,000 residential units, 11 million square feet of office and retail space, and other construction on a platform built over Metra Electric tracks.

Dunn stood alongside the Mayor of Chicago Lori Lightfoot at an August 2022 event at Soldier Field to highlight the City’s (Chicago) commitment to try to keep the Bears in Chicago or plan for the 98-year-old stadium’s future in case they bolt to the suburbs. Although City officials were briefed on Dunn’s new renderings, they were not trumpeted in a presser as in the Summer.

In a statement, the Mayor’s office said Lightfoot “has been vocal about the need to reimagine the experience at Soldier Field”.

Spokesman Cesar Rodriguez said, “The City still believes that Soldier Field is the best home for the Chicago Bears and continues to engage with community partners and members of the Museum Campus Working Group to explore the future of the stadium.”

Lightfoot has not given her endorsement to Dunn’s One Central development, saying she, too, is waiting on the results of the State (Illinois) feasibility study.

Dunn did not disclose the estimated costs of the redevelopment and the Lightfoot administration has not released a detailed explanation of how much public investment would be needed and how the City would fund the project.

In August 2022, City officials gave a broad range of up to $2.2 billion, which Dunn says is still in the ballpark.

Bears Vice-President of Marketing and Communications Scott Hagel said in a statement that “The only potential project the Chicago Bears are exploring for a new stadium development is Arlington Park. As part of our mutual agreement with the seller of that property, we are not pursuing alternative stadium deals or sites, including renovations to Soldier Field, while we are under contract.”

‘nbcchicago.com’ stated that Landmark Development, famed for their work on NFL stadiums and entertainment districts in Minneapolis (Minnesota), Green Bay (Wisconsin) and more, produced the six-minute video showcasing the images of the stadium, which would include a dome over the playing surface and a new transit center to help fans get to and from games.

Additional skyboxes, clubs and other amenities would also be included in the plan.

To the immediate West of the stadium would be a large transit hub, which would allow access to CTA, Amtrak and Metra trains, as well as a new people-mover train to help bring fans to events.

The One Central Station would be built across DuSable Lake Shore Drive from the stadium, and would feature rail lines for three major carriers, as well as food and entertainment options.

‘nbcchicago.com’ further stated that the video presentation also showcased a tailgating space for fans to enjoy prior to games.

One of the proposed features of the renovated stadium would be a Veterans Memorial area, dedicated to the men and women who have served the US military.

The proposal also includes new clubs on both the East and West sides of the stadium, with fans able to eat, drink and socialize amid the famed colonnades of Soldier Field.

On the West side, fans would be treated to views of the City and enhanced dining options, while on the East side, views of Lake Michigan would be the star attraction.

The North side of the stadium would also have a proposed lounge that would allow fans to see remarkable views of Chicago’s skyline.

Interior views of the proposed renovations shows a dome made primarily of glass and steel to allow natural light to stream in, similar to the way the 73,000-capacity U.S. Bank Stadium in Minneapolis, Minnesota, is constructed.

The Landmark Development was also instrumental in the construction of that stadium.

Additional skyboxes and clubs would also be constructed on both sides of the stadium.