Qatar’s Losail International Circuit will hold its first ever Formula 1 Grand Prix from November 19th-21st, with the country set to host the 20th event of the 2021 season, as well as signing an additional 10-year deal to host F1 from 2023.

The ‘F1’ stated that the Qatari circuit is most famous for its association with the world of two-wheeled racing, with Losail having hosted the MotoGP (Grand Prix motorcycle racing) series since 2004. Ooredoo, the international communications company, will be the title sponsor for the event.

The 8,000-capacity Losail International Circuit is a motor racing circuit located just outside in the town of Lusail, North of Doha, Qatar. Built in just under a year by 1,000 workers at the cost of US$58 million, the track opened in 2004 to the inaugural Marlboro Grand Prix of Qatar (MotoGP Championship), won by Sete Gibernau (Spanish motorcycle road racer).

The Fédération Internationale de l’Automobile (FIA) is an association established on June 20th, 1904 to represent the interests of motoring organizations and motor car users. To the general public, the FIA is mostly known as the governing body for many auto racing events, such as the well-known Formula One.

A statement from F1 read, “There was a strong will from Qatar to be helpful to F1, and in the course of this process, the vision for a longer partnership was discussed and agreed for 10 years. The step from the gesture to be helpful to F1 in 2021 to a long-term strategy was short and simple and the vision for F1 to be the showcase for Qatar after the FIFA World Cup™ in 2022 was the driving force behind this long-term agreement. As part of the longer-term deal, discussions will continue regarding the location for the Grand Prix from 2023 with further details to be provided at a later time.”

Speaking of Qatar’s inclusion on the 2021 calendar, F1 President and CEO Stefano Domenicali praised the efforts of the Qatar Motor and Motorcycle Federation (QMMF) (the sole motorsport authority in the State of Qatar) and the Qatari authorities in helping to arrange the Grand Prix at a short notice, saying, “We are very pleased to welcome Qatar to the Formula 1 calendar this season and for the longer term from 2023. The Qatar Motor and Motorcycle Federation and Authorities have been incredible and have moved at great speed to ensure the race can take place this season at the Losail Circuit, famous to many as the host of MotoGP.”

Added Domenicali, “We have shown that we can continue to adapt and there is huge interest in our sport and the hope from many locations to have a Grand Prix. The huge effort from all the teams, F1 and the FIA has made it possible to deliver a 22-race calendar, something that is very impressive during a challenging year and something we can all be proud of.”

Remarked Abdulrahman Al-Mannai, President, Qatar Motor and Motorcycle Federation, “This is a very special day for Qatar Motorsport and our nation’s ambitions as a host of major sporting events. I’m very proud that we’ve been able to support Formula 1 by stepping in and hosting a race in our country in such a short time frame, while also securing a groundbreaking long-term deal with F1. This exciting agreement means that Qatar will be the home of both Formula 1 and MotoGP for the next decade, which is the pinnacle event in global motorsport. We have a proud motorsport history and this is the next chapter for us. Qatar will be a great destination for F1 and we look forward to welcoming all the drivers, teams, media, and fans very soon.”

Jean Todt, FIA President, added, “I congratulate Formula 1, the Qatar Motor and Motorcycle Federation and the Qatari authorities, who have worked tirelessly to quickly and efficiently make the inaugural Grand Prix in Qatar happen in these challenging times. The Losail International Circuit, which will welcome the race, has been working closely with us to ensure they are full prepared for this momentous occasion. We are very proud of this collective achievement. I thank the QMMF President Abdulrahman Al-Mannai and His Excellency Salah bin Ghanem Al Ali, Minister of Culture and Sports, for their involvement.”

Added Todt, “This commitment to F1 for the long term, as well as the organisation of the 2022 FIFA World Cup™ and many other international events, is another example of Qatar’s strong passion for sport.”

The ‘RaceFans’ stated that the space for a Grand Prix on November 21st had remained open since the Australian Grand Prix was canceled for a second year running due to restrictions and logistical challenges relating to the ongoing COVID clobber in Australia. The sport’s first visit to Qatar take place on November 21st, concluding a run of three consecutive events with Mexico and Brazil.

Losail is a regular feature on the Moto GP world championship calendar. It previously played host to the opening round of the short-lived GP Masters series in 2006 and was visited by GP2 Asia in 2009. The World Touring Car Championship also raced at the venue for several years.

The ‘RaceFans’ further stated that Qatar’s new race will not to appear on the 2022 F1 calendar as the country is hosting the FIFA World Cup™ next year.

The ‘F1’ further stated that the race will take place over the weekend of November 19th-21st, the third event in a triple header that begins with the Mexican and Brazilian Grands Prix. The Qatar GP will be followed by the first ever Saudi Arabian Grand Prix and the season finale in Abu Dhabi.

The inaugural Qatar Grand Prix will take place at the purpose-built Losail International Circuit, 22 miles North of the capital City of Doha on the Arabian Peninsula.

The 16-turn track was built in 2004 and is no stranger to high octane racing, having become a permanent fixture on the two-wheeled MotoGP calendar. This year, it’ll host round 20 of the F1 World Championship.

The race is part of a longer-term deal with F1 that will run for 10 years from 2023 (with no race next year as the country is hosting the FIFA World Cup™).

Losail already had an FIA Grade 1 Licence, which meant it was a viable option to host a Grand Prix this year at a short notice amid COVID-19 continuing with its destructive streak in several parts of the globe.

Governing body the FIA will complete an inspection, but that’s par for the course for circuits joining the F1 calendar, and the required changes are likely to be minimal.

The main straight is a decent length at just over a kilometer and will provide the location of the circuit’s one DRS zone. That means the Turn 1 right-hander will be the best opportunity to overtake.

Tires will likely be a talking point, as the high percentage of time the cars will spend cornering means teams could experience higher than average tire degradation.

There’s a triple right-hand apex, almost flat high-speed corner sequence (Turns 12 through to 14) which is similar to Turn 8 at Turkey but in the opposite direction and will be particularly challenging on tires.

The track hasn’t been resurfaced since 2004, so it has worn and exposed the coarse aggregate. That should mean good grip and levels of abrasiveness with regards to tire wear.

Cars will reach an average speed of 237km/h in qualifying and 220km/h on race day. In terms of predicted lap time, F1 simulations suggest 1m 22.5s for qualifying and 1m 28.6s for the race, which will last 57 laps.

A clear picture has still not emerged whether the racing showpiece will be held during the day or at night.

Losail already has the capability to host a night race, with around 3,600 bulbs across 1,000 structures dotted around the circuit to illuminate the track. At 5.380 km, the lit area covers the same amount of ground as 70 full-sized football pitches.

If it’s a day race, temperatures will be hot and humid – but as its Autumn time, conditions will still be significantly cooler than the summer.

Should the race take place at night, ambient temperatures will drop still further to around the mid-20s in degrees Celsius.

Aside from welcoming MotoGP, the Middle Eastern country has hosted motorsport of the four-wheel variety, with 1992 F1 world champion Nigel Mansell taking victory at Losail in the short-lived Grand Prix Masters Championship.

Outside motorsport, Qatar has hosted World Championships in athletics, road cycling and gymnastics, before hosting the FIFA Club World Cup™ as a dry run ahead of the arrival of the FIFA World Cup™ late next year.

« Previous News: Alcohol in UK stadia stands bit of a handful?
» Next News: Ryan Family bounty for US varsity venues 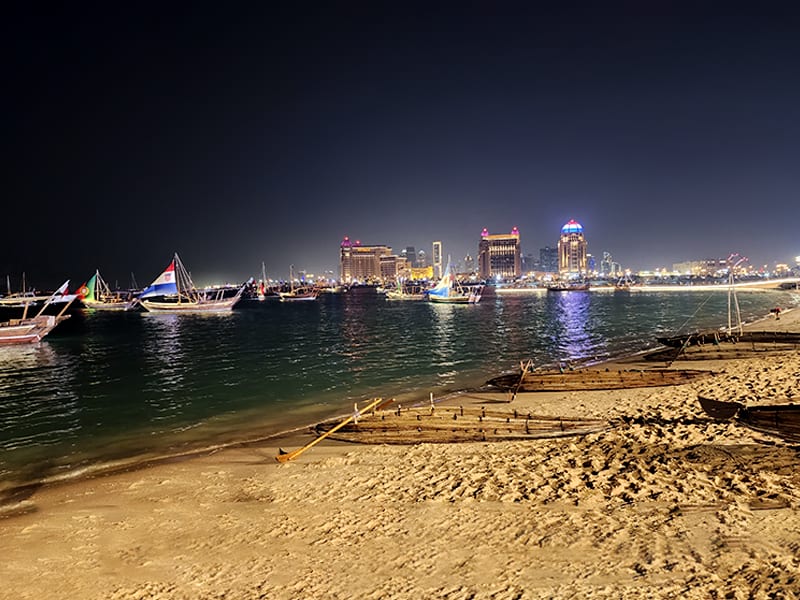 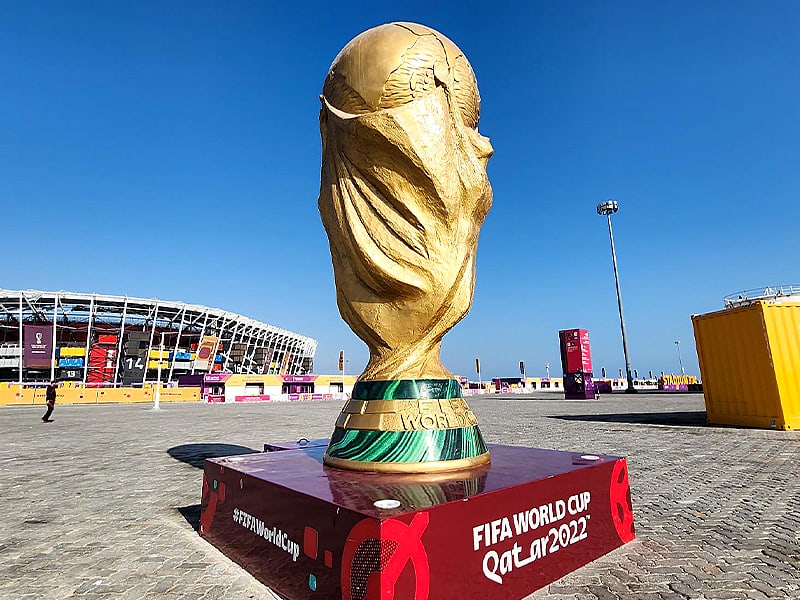