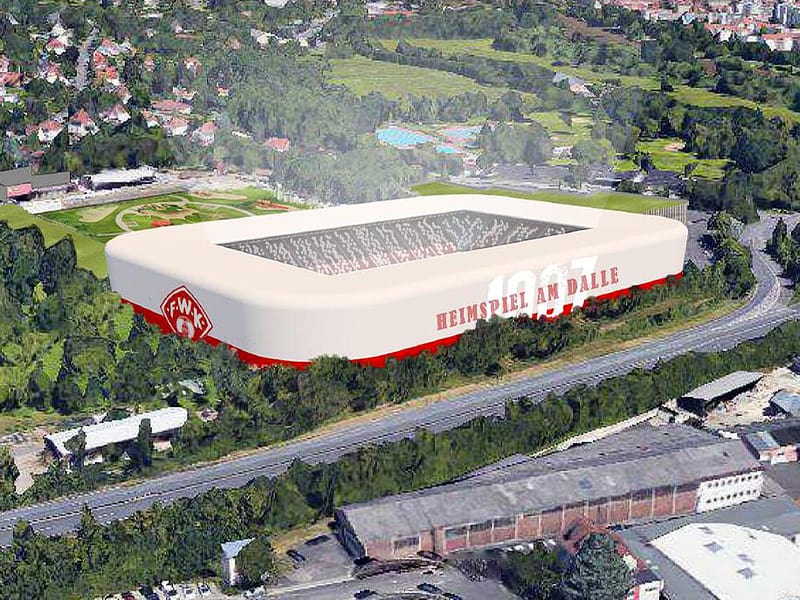 The German association football club Würzburger Kickers published a draft recently of how a new home of theirs in Dallenberg could look like.

‘Radio Gong’ stated that the Würzburger Kickers are not doing very great on the pitch too – it is very recently that they have been relegated from the 2.Bundesliga. If they want to come back to this division, they would not only have to improve on their pitch performance, but would have to build a new arena too.

Würzburger Kickers is a German association football club playing in Würzburg, Bavaria. In pre-World War II football, the club has competed briefly at the highest level, in the Bezirksliga Bayern and, during the war, in the Gauliga Bayern.

The 13,090-capacity Flyeralarm Arena is a football stadium in Würzburg, Germany. Würzburger Kickers use this stadium for their home games.

‘Radio Gong’ further stated that as per rules, 2.Bundesliga clubs’ digs should be able to hold a minimum of 15,000 spectators and the Flyeralarm Arena can only pack in a crowd of 13,090. Only the grandstand is covered with a roof and there is the huge problem of noise pollution.

The club authorities are planning to build a new 15,000-capacity stadium which will enjoy stands with roofs and will also be a soundproof one.

‘Radio Gong’ further stated that a parking spot will come up which will be in a position to hold 1,600 vehicles at three levels. The present stadium will get transformed into an adventure playground and the price tag of the new home of the ‘Red Shorts’ will come to around 40 million euros.

‘The Main Post’ stated that the whole planning process began in 2018 when club officials were mulling on whether to redecorate the present home ground of the ‘Red Shorts’ or build a totally brand-new futuristic facility. Apart from planning the new home at the present site in Dallenberg, the authorities are also scouting for four other sites because they feel that the most logical thing to do will be to build a new venue.

The residents have been complaining for a long time that the present stadium causes too much of noise pollution and the floodlights are too “disturbing”. Several cases filed by the residents in this regard are pending at the court in Würzburg as well as in the Bavarian court.

‘The Main Post’ further stated that the new arena will come up a little away from the residential area – closer to the nearby B19 motorway and rotated 90 degrees from the current location of Flyalarm Arena. Fully covered stands would also help as sound would bounce back towards the pitch.

The Würzburg City Council has assured the ‘Kickers’ of all possible support to build a new soccer-specific stadium and the Kickers’ authorities are holding talks with potential investors. The concept of the stadium was developed by GKP Braunschmidt Kurz Architects.