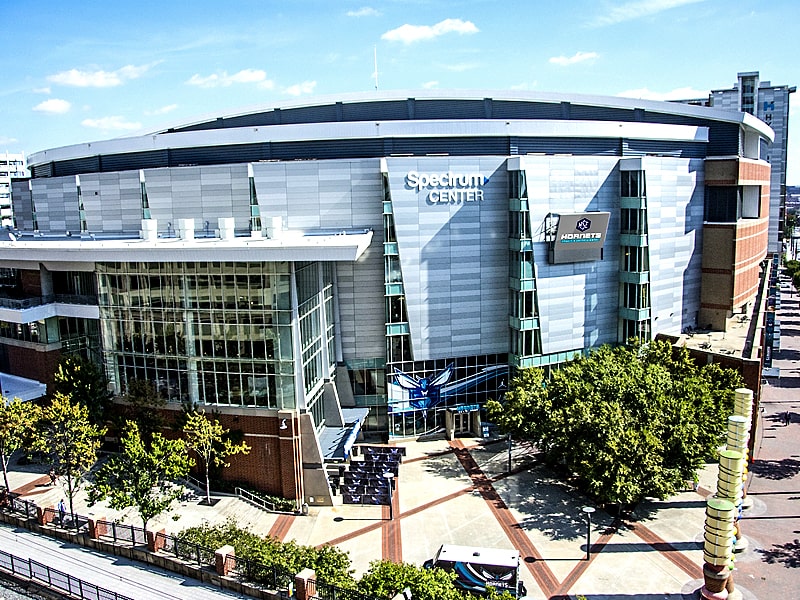 Charlotte leaders announced renovation plans for Spectrum Center in Charlotte, North Carolina (US) during the City Council business meeting on May 31st. Leaders say this could be a win-win for everyone involved for a ‘New Buzz City’ that, if approved, could see work start in the Summer of 2022.

The ‘WCNC’ stated that the estimated base price of $173 million in renovations includes a performance enhancement center, which City officials say most National Basketball Association (NBA) teams have already. However, the final suggested price tag is around $245 million. The new practice center would include expanded locker rooms and healthcare spaces. Outside of the center, planners say the area around it could be transformed into an entertainment district. Some possible examples given as case studies include Victory Park in Dallas and Milwaukee’s Deer District.

The Spectrum Center is an indoor arena located in Uptown Charlotte, North Carolina (US). It is owned by the City of Charlotte and operated by its main tenant, the NBA’s Charlotte Hornets. The arena seats 19,077 for NBA games but can be expanded to 20,200 for college basketball games.

The Charlotte Hornets are an American professional basketball team based in Charlotte, North Carolina (US). The Hornets compete in the National Basketball Association (NBA) as a member of the league’s Eastern Conference Southeast Division, and play their home games at the Spectrum Center.

The ‘WCNC’ further stated that going back inside, planners hope for more basketball camps with the Charlotte Hornets by adding additional courts. City leaders say this would be a win for everyone involved: The City, the team and the developer.

Other renovations proposed include:

Another part of the pitch: Accessibility to transit, namely near Brevard Street and the Charlotte Transit Center.

If approved, this renovation would take about four years with initial work starting in the Summer of 2022 and wrapping up in 2026.

The City is required to make upgrades and capital repairs by the NBA, which is where the base $173 million main price tag is involved. The current lease the Hornets have on the Spectrum Center expires in 2030, but the City has negotiated with the team to extend the lease to 2045. As part of the agreement, the Hornets would pay $2 million in rent per year starting in 2031 and continue contributing $1.1 million in capital improvements annually. The Hornets have also agreed to cover cost overruns.

As far as funding sources, the City said no general funds would be tapped into. However, the plan suggested involves dipping into the tourism fund for additional capital upgrades to the tune of $42 million. This would not kill any projects, but rather change the timeline for some projects if approved. $60 million is also being sought for naming rights in the performance center. The naming rights and tourism funds for capital upgrades is what pushes the cost up to $245 million.

The City is opening up public input online, and plans for a follow-up presentation to the City Council later during the June 6th strategy session, aiming for a Council vote on June 13th.

Owned by the City of Charlotte, Spectrum Center has been ‘the Queen City’s’ NBA home arena since opening in October of 2005. The arena was built originally to host the Hornets before owner George Shinn relocated the team to New Orleans in Louisiana (US). As part of the deal, the NBA promised Charlotte a new team, which moved into Spectrum Center for the 2005-2006 seasons.

The Spectrum Center’s design is a “celebration of gathering” with artwork around the building showcasing Charlotte’s communities of the past, present and future. The Hornets installed a new scoreboard in 2016 ahead of the NBA All-Star Game, which was rescheduled to 2019 due to House Bill 2. Along with the new scoreboard, Charlotte renovated the visitors’ locker room, suites and other locations as part of the first major renovations in Spectrum Center history.

Since its opening, Spectrum Center has hosted the NBA All-Star Game, Democratic National Convention and Republican National Convention. It is also the former home of the American Hockey League (AHL) team Charlotte Checkers, hosting the team until 2014.

The Spectrum Center has hosted the National Collegiate Athletic Association (NCAA) Men’s Basketball Tournament on multiple occasions, including the first-ever 16-1 upset when UMBC defeated No. 1 Virginia in 2018.